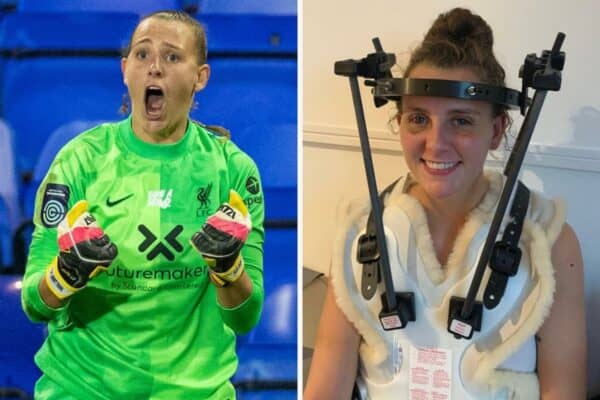 Liverpool have issued their support to women’s goalkeeper Rylee Foster, after scans revealed she had suffered fractures in her neck following a car accident last month.

Foster was involved in a road traffic incident while visiting friends during the October international break, which required her to spend time in hospital.

The 23-year-old returned to Merseyside for further assessment, and the club have now confirmed that she has suffered “some fractures to vertebrae in her neck.”

Club doctor Amelia Woodhouse has explained that Foster will need to wear an external fixation device for a minimum of six weeks, with Liverpool employing specialists in spinal injuries to monitor her progress.

She also suffered internal injuries which “have shown improvement on recent scans,” while her knee is in a brace.

These are horrific injuries for a player who joined Liverpool in January of last year, and played a vital role in the penalty shootout win over Aston Villa in the League Cup in October.

Foster also saved two spot-kicks in the 1-0 win over Sheffield United in April, though she has found herself as second choice behind Rachael Laws this season.

Taking to Twitter following the confirmation of her injuries, the Canadian wrote: “To simply say thank you, or appreciate the kind words, is simply not enough as I try to express my thanks to the supporters of this great football club.

“The outpouring of support has been overwhelming, I am so grateful to have you all by my side as I go through my recovery and rehabilitation.

“These next few months will be some of the most difficult in my life.

“What I know is the challenges ahead are saved only for the people that can handle them.

“When I hear the lyrics of You’ll Never Walk Alone, that song, [they] aren’t just words, they are my reality, and what I know is at the end of this storm there will be a golden sky!

“The road to recovery has begun. YNWA. Thank you.”