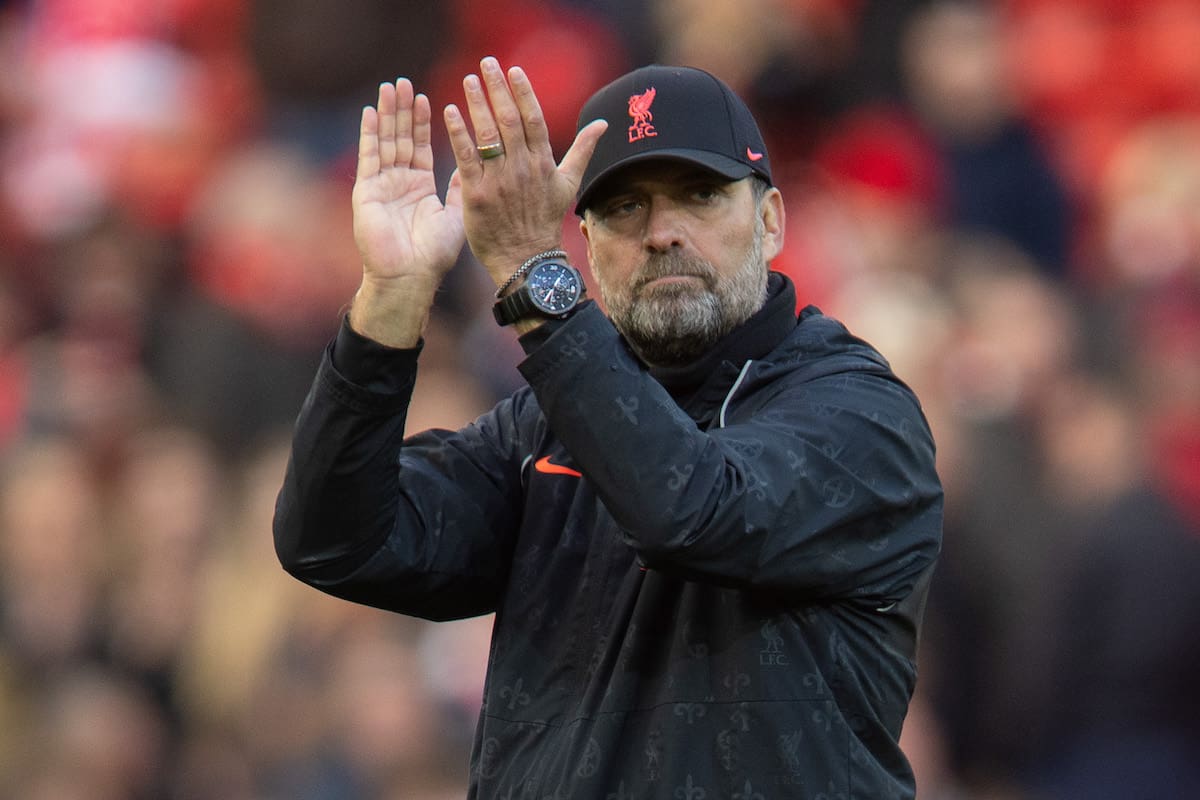 Jurgen Klopp has used his programme notes ahead of tonight’s game against Newcastle to further explain his views on vaccination against the coronavirus, and also on why the ‘stick to football’ message is nonsense.

Klopp has spoken in press conferences about the vaccination status of the Liverpool squad and staff, and his own views, including a comparison to drink driving

On Wednesday, as the rate of infection hit a new high in the UK and multiple Premier League games were suspended, Klopp told the media how he and most of the squad have had their booster jab and that “there are no two possible answers, there is only one answer, so you do it. That’s how I understand it.”

Writing in the LFC matchday programme, Klopp has said how his message has been clear throughout and that he “won’t apologise for the view I hold on the vaccination, no matter how unpopular it might make me in certain sections of society.”

The Reds’ boss has never been afraid of making his own feelings on sensitive topics be known, ranging from Brexit to vaccinations. 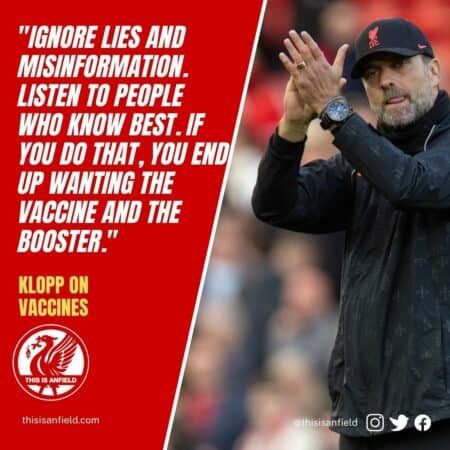 He also takes on the rather ridiculous ‘stick to football’ notion that certain idiots seem to throw around every time a football manager speaks about anything other than football – as though they exist in a completely separate world away from the rest of human society.

“The ‘stick to football’ abuse so misses the point,” Klopp writes. “Yes, I know about football having spent my entire life in the game. And my view on the vaccination isn’t from my own imagination.

“That’s the point – I listen to experts. People who are smarter than I ever could be have come to the rescue of society by creating this for the world.”

Nail on the head, as ever, from Jurgen.

“My message around this has always been simple and clear, I hope: I trust experts. I follow the advice of smart, educated people who know their field because they’ve dedicated their lives to it and have studied it.

“We are clearly moving back to stricter measures around the team environment and at LFC we are absolutely OK with that. As I have spoken about before, we have a very high take-up of the vaccine at our club and have done for a long time. It might be 100 per cent now or as close as is possible, so that’s important.

“I have no issue telling you I received my booster jab as soon as I was eligible and again that will be the case for many if not nearly all within our ranks in the coming days and weeks.

“I won’t apologise for the view I hold on the vaccination, no matter how unpopular it might make me in certain sections of society. I’m the same privately as I am publicly on this.

“If I come across friends or people I care about in my life away from football and they tell me they haven’t had a jab yet, I do my best to encourage them to listen to experts. It’s never a case of ‘listen to me’ – it’s always ‘listen to those who know’.

“Ignore those who pretend to know. Ignore lies and misinformation. Listen to people who know best. If you do that, you end up wanting the vaccine and the booster.

“The ‘stick to football’ abuse so misses the point. Yes, I know about football having spent my entire life in the game. And my view on the vaccination isn’t from my own imagination. That’s the point – I listen to experts. People who are smarter than I ever could be have come to the rescue of society by creating this for the world.

“We are very blessed in this country and throughout Europe to have such incredible access to it. I see that as a privilege and one I will always be grateful for.

“We don’t know what impact the new variant will have on football in the short or medium term. It will certainly impact player availability as positive cases arise and might result in fixtures being postponed sporadically, but that is for the governing bodies to manage.

“Clearly we hope disruption is minimal, but that’s not in our hands and nor should it be. Again, we must trust those who know best, those with the knowledge. We just want as many people as possible to be safe. Health has to be the priority always. Health of participants, staff and supporters.”

* You can buy Liverpool’s official programme from Reach Sport, here.