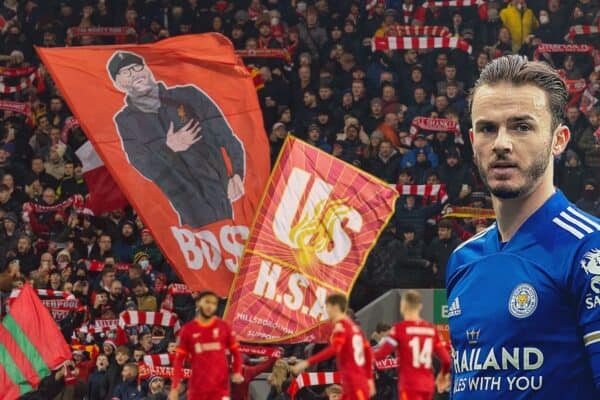 The Anfield atmosphere is in a league of its own and has intimidated countless world-class players and teams throughout the years, and James Maddison was the latest to get a taste.

Anfield isn’t always rocking, far from it. But when the call comes, Anfield answers – and while often reserved for European nights, the League Cup sparked a fierce reaction.

Leicester‘s time-wasting on the pitch to the crass words from the away end mixed with the need for a fightback created a cauldron of noise that helped push the Reds over the line.

The Anfield atmosphere is no ‘myth’ as some John Doe will profess having never come close to experiencing what the ground is capable of, sorry if Burnley at 3pm doesn’t get quite get the same reaction…

But while some love to continue to pedal such rhetoric, Maddison said just the opposite after Leicester fell to defeat in the penalty shootout.

“Cruel end to a great game at the stadium with the best atmosphere in England. Tough one to take!” Leicester‘s No. 10 penned on his social media, and it received mixed views from fans.

I’m torn between who’s word to take more serious, Maddison who’s just joined the long list of players and managers who feel intimidated by the atmosphere that can be created at Anfield or those England flag waving helmets who sang “is this a library?” all night. https://t.co/zj8uJHNl6p

Another one confirming that when it matters there's no better atmosphere anywhere in the country ? https://t.co/Rziu63KsKx

Anfield atmosphere is a myth they said https://t.co/rjsYe0IL2A

This is so weird hahaha https://t.co/naEwVYHSJl

Oh look, there's another one ? https://t.co/jhbbTdG2km

But carlos from wrexham says anfield’s atmosphere is a myth so i’ll believe him thanks https://t.co/qAIe8AdITe

Perhaps the knee slide at the Kop end was a little premature from Maddison but he spoke nothing but the truth regarding Anfield and what it can cook up.

‘There’s no noise like the Anfield noise – and I love it!’