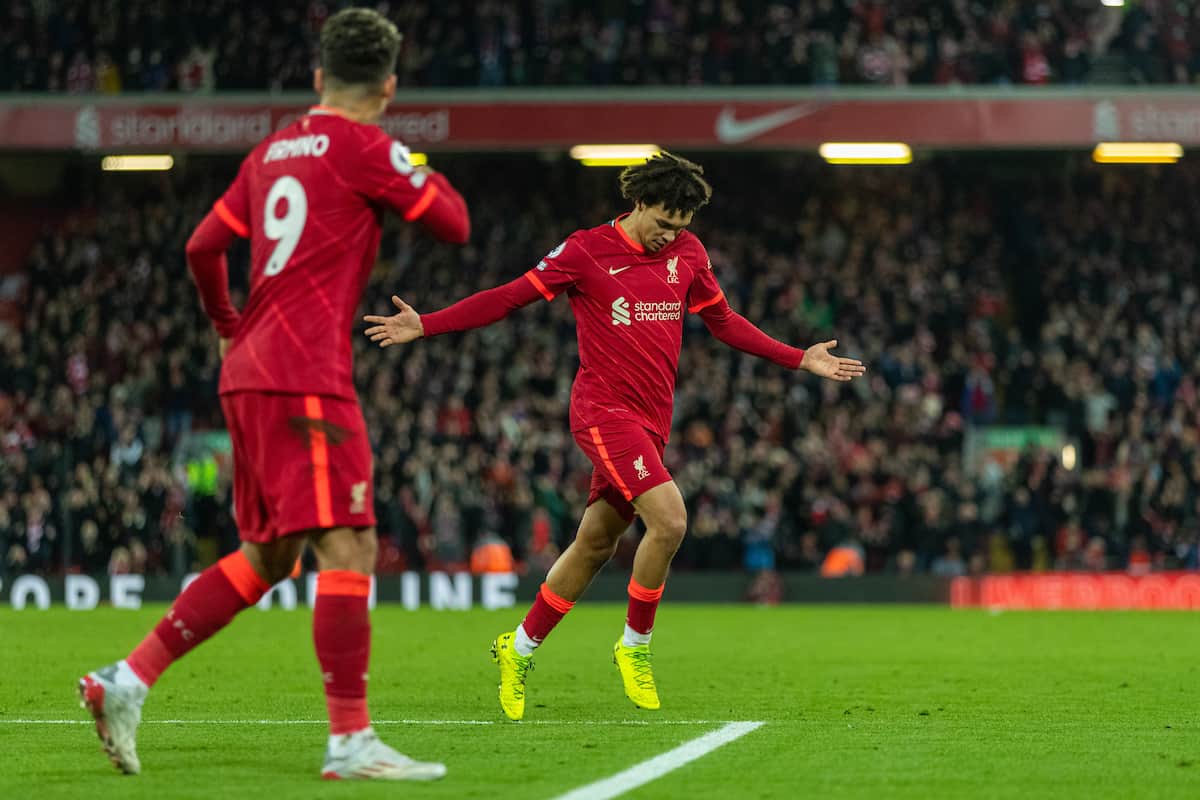 It is now eight successive victories for Liverpool after they put three beyond Newcastle after going behind early, with Trent Alexander-Arnold‘s effort rightly taking the headlines.

Liverpool were not immune from positive COVID cases with Virgil van Dijk and Fabinho both being forced to miss the game, and then the Reds’ night didn’t get off to the best of starts.

Jonjo Shelvey was responsible for that after latching onto Thiago’s poorly placed clearance and duly punishing the Reds, but the joy was short-lived for the visitors.

Two goals in four minutes swung the game in Liverpool’s favour with Diogo Jota and Mohamed Salah both getting on the scoresheet.

A lethargic start to the second half made for few opportunities but Trent Alexander-Arnold left no doubt over his rocket to make sure of the result late on, securing the eighth win in a row.

And it was the right-back who fans lavished after the latest Liverpool win:

That almost took the goal out of its foundations ? @TrentAA

Trent Alexander-Arnold. Filed under 'what a hit son, WHAT A HIT!'

Mike Dean with a dummy run across the goalkeeper for the Trent goal. Spectacular bit of refereeing.

Trent topped off his performance with that excellent tackle to stop Fraser tapping in. He did similar to stop Hwang scoring vs Wolves. His defending has been mostly very solid this season but it never gets mentioned because he has too many other gifts.

Best right-back in the world. pic.twitter.com/0ocOOCnrD1

That perfect moment in a scrap when Trent steps up and says "alright enough of this crap" and delivers a KO. Priceless

Full time, another win and another three points, Liverpool a point off top and three clear of third. A 3-1 win rounded off with another goal of the season contender from the Reds, this time from Trent Alexander Arnold – and a win with two of #LFC’s best missing because of Covid.

Not at our prettiest but 3 points is what matters. Thought Matip & Konaté were boss tonight. Trent my MOTM. This lad’s a special player when the chips are down. A real leader & put the match out of reach.

Who knows what’s next?

Adore these. What a marvellous football team.

Despite Newcastle‘s chances being few and far between, Liverpool’s defensive was impressive beyond just Trent with Ibrahima Konate also acting like a brick wall for the Reds.

It’s another win on the board and with Chelsea dropping points, Liverpool now have a buffer in the table and sit just one point behind Man City at the top.