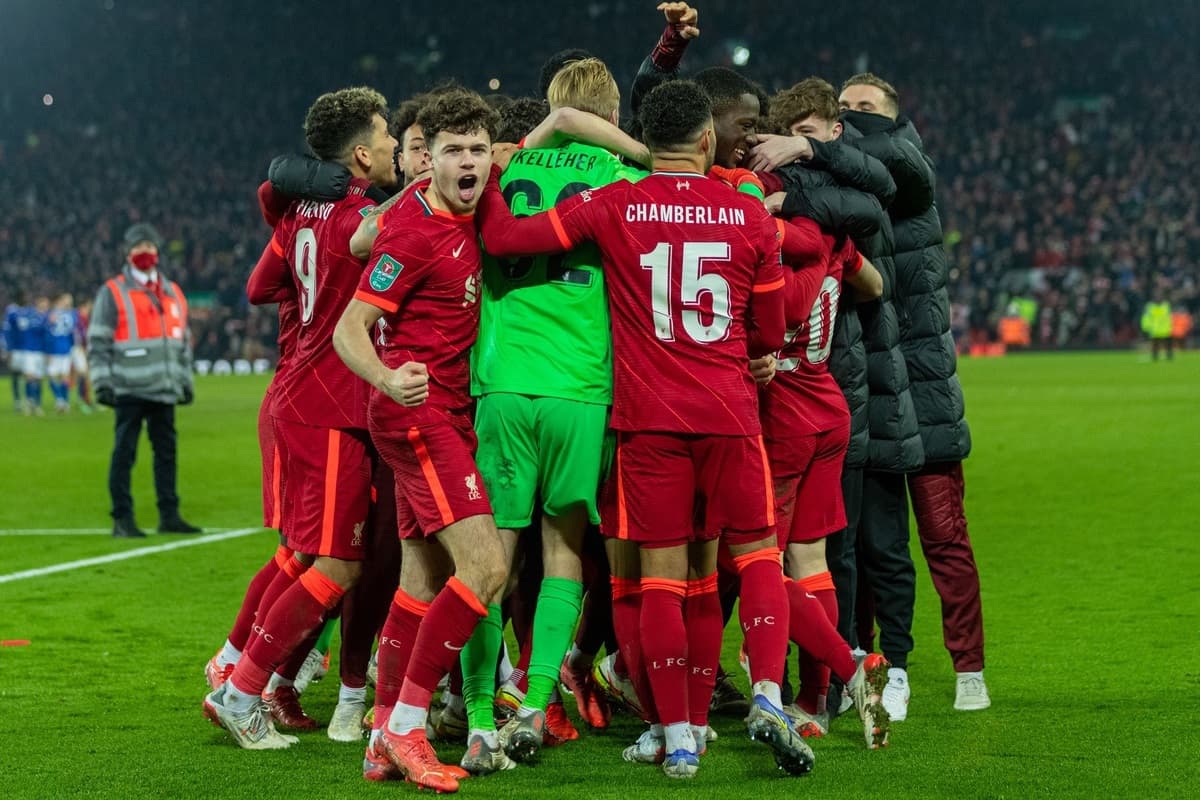 The rotated Reds recovered from a dreadful start and being 3-1 down inside half an hour to come back and level Leicester – before reaching the semi-finals on penalties. 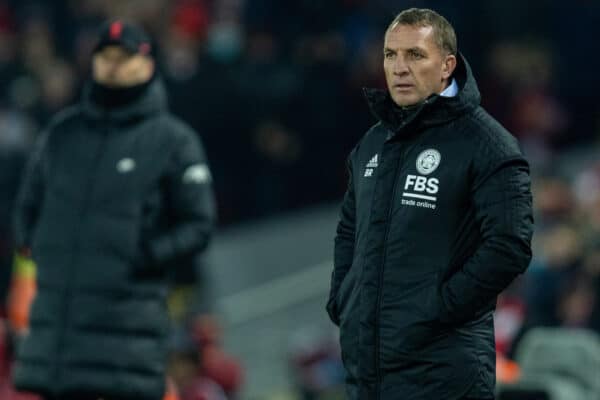 “Leicester City Football Club can confirm that Sunday’s Premier League visit to Everton has now been postponed…The decision, which follows the postponement [Thursday’s] fixture against Tottenham, was again taken with guidance from medical advisors in light of further positive tests for COVID-19 within Leicester City’s First Team Squad over the last 24 hours.

“First Team operations at Seagrave remain closed for a period of 48 hours to reduce the risk of further infection.”

So…that was the word from the KP, nee Filbert Street, across December 17 and 18.

So on one of those days at least, they picked up new Covid positives to mean they had fewer than 14 available players for Sunday – but by Wednesday night they were back up to 18 senior players, not including the reserve goalkeeper?

Including eight of the 11 players who have played most Premier League minutes this season?

What a truly marvellous, well-timed recovery by them all. 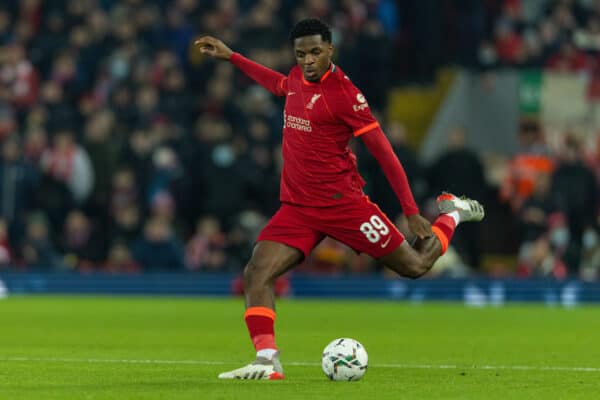 Big Billy ain’t ready, and that is the truth.

Given the amount of time Ibou Konate has spent watching from the sidelines this season and awaiting his chance, it was maybe a surprise that he wasn’t picked to play even if it was a couple of games in a couple of days, but what’s undeniable is that Koumetio is a distance yet from senior action-ready.

It’s more of a concern where Joe Gomez is these days, still some distance from being sharp, rapid and near-elite in possession, all of which he was in his pre-injury peak.

The night was disappointing in the amount of times the back four gave the ball away, often in really dangerous positions, with Kostas Tsimikas especially sloppy with his passing in the opening quarter of the match.

It all highlighted too how good, and how transformative, our No. 5 was after coming on. 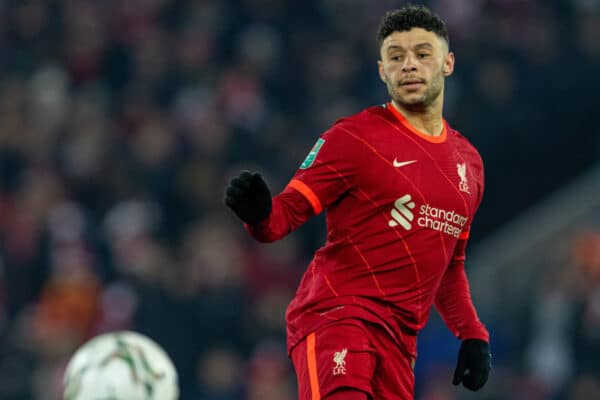 One man was repeatedly driving the Reds forward at 0-0, 1-0, 2-0. He was in midfield, but he wasn’t wearing the armband – it was Alex Oxlade-Chamberlain.

He was in great form not too long ago and can probably feel hard done by to have been taken out of the league XI, but here he was again, proactive, effective in the final third and aggressive in his ball-winning.

Second half he started off with a bursting run into the area at one end, then a double tackle and interception in his own box to stop a dangerous attack.

Another control and pass in the leadup to Firmino’s chance was excellent, a shot from the edge of the box went close and a dribble past four inside the area was to push the Reds’ attempts for an equaliser.

Scored a good pen, too.

He was the best player on the park in red once again. 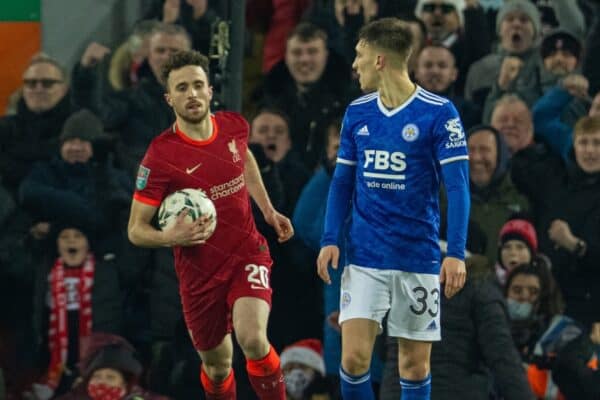 No messing about at the break from the boss.

The three least-experienced players off, three seniors on, one in each line of the team: Milner, Jota and Konate for Bradley, Koumetio and Morton.

The difference was twofold: better positional and passing work from Liverpool, but also Leicester quite visibly bricking it once we started to play at speed and the Anfield roar cranked up.

For about 10 minutes before Jota’s goal went in it was an absolute wall of noise behind the goal and another of red pressure in front of it, with Ox, Keita (what a penalty!), Firmino and Jota all non-stop involved in winning the ball, using the ball.

The constant crying from the Foxes over every marginally questionable decision from that point on only highlighted their wilting and weary nature, and beautifully led to no fewer than six minutes added on.

Taki’s goal time? About five minutes and 10 seconds past the 90.

Leeds and the last four 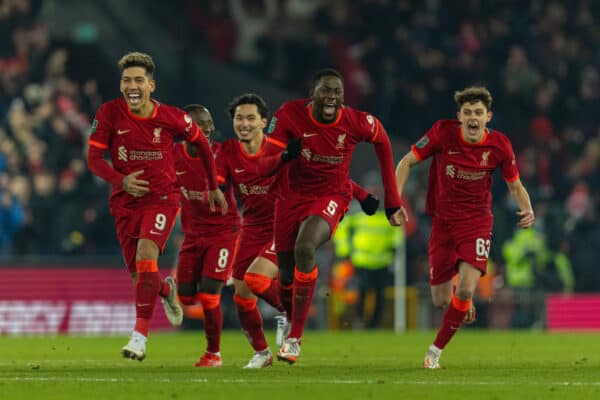 Boxing Day and Leeds is our next game, a must-win and a should-win at the same time.

While all fans appreciate another trophy shot at all times, the most important thing remains Premier League victories.

Having seen our winning run ended at Spurs at the weekend, the only option against Bielsa’s stricken group is a right hammering, especially after City just put seven past them and Arsenal followed it up with four.

Plenty staked their claim for a place in the team in the second half against Leicester, and our own recoveries from Covid might also shape the lineup for that game at Anfield.

With no games to be called off more than likely, it’ll be all hands to the pump and a quickfire six points at stake – including, of course, our visit back to these clowns on the 28th.

They, meanwhile, can make up their postponed Premier League games on the days we’re playing the League Cup semi-final. Arsenal await.