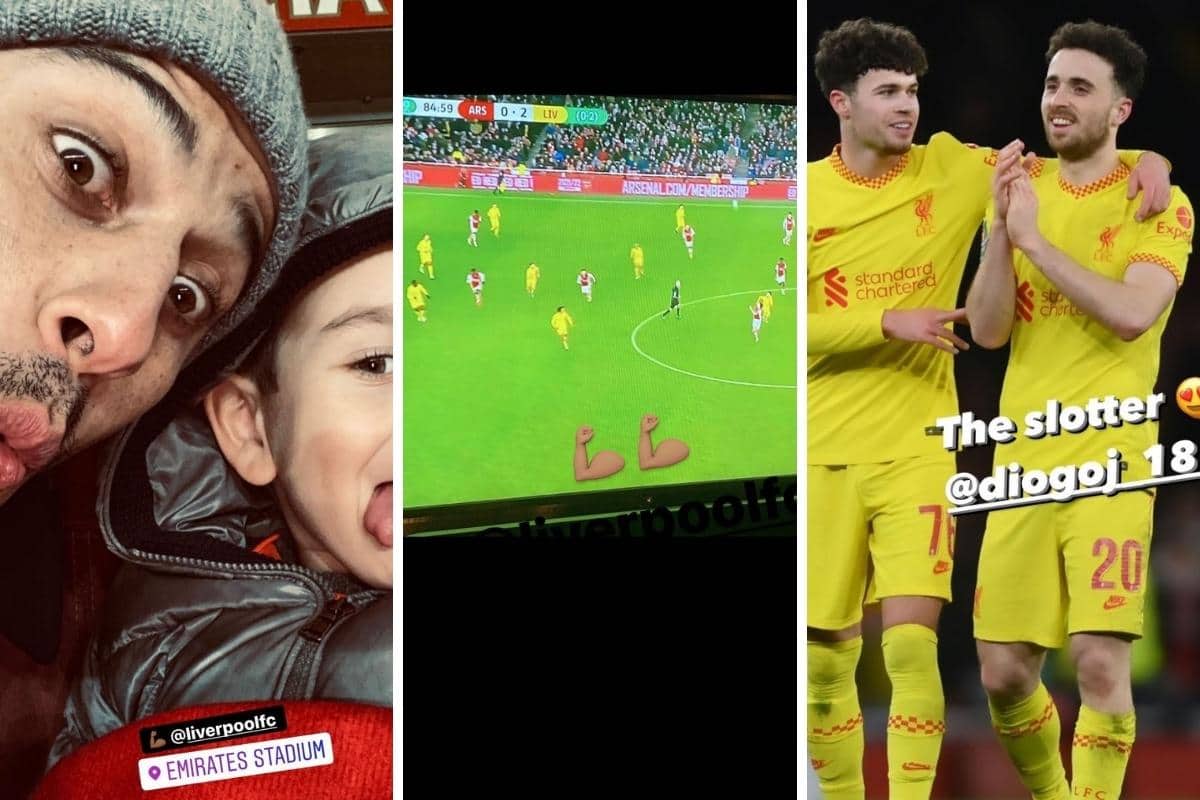 Diogo Jota‘s two goals earned Liverpool a place in the League Cup final, with both Mohamed Salah and Thiago watching on as they await a big date at Wembley.

After the disappointment of their 0-0 draw at Anfield, the Reds brought their A-game to the Emirates with Jota the inspiration in attack.

The Portuguese scored either side of half-time, with his second finish far more accomplished than his first, which came after a brilliant flowing move but was scuffed into the bottom corner, leaving Aaron Ramsdale wrong-footed.

There was a measure of fortune in Liverpool’s opener, then, and speaking to LFCTV after the game, Jota cleared up the question of whether or not he intended it:

“I wanted to shoot in that corner, but the ball was not really in the corner or powerful, obviously!

“So I kind of miss it. But I wanted to place it in that corner.

“Obviously it wasn’t in the corner but I caught the ‘keeper on the wrong foot and it was enough to go in – fortunately for me and for the team.”

Jota will almost certainly be part of the side that takes on Chelsea on February 27, which will bring his first chance of silverware since joining Liverpool from Wolves.

That it comes at Wembley is an added bonus for the No. 20:

“It’s incredible. I played there in the semi-final with Wolves once, I know how special it is to play there.

“But this time, it’s a proper final with a trophy to play for.

“So when the time arrives, we go with everything to win it.”

That is a feeling shared by the rest of the Liverpool squad, with the overriding message after the game being “see you at Wembley!”

London is Red. See you at Wembley ? pic.twitter.com/QdlaoHx1uN

Great evening at the Emirates?
See you at Wembley! pic.twitter.com/Lyz7JSRmZA

See you at Wembley! pic.twitter.com/ZGf8jD8TIO

Great one from this group tonight. We're going to Wembley! #YNWA pic.twitter.com/23Kf84DBz8

Top performance from the boys in front of a great away support ? Fancy a trip to wembley anyone? #jotaresult #YNWA pic.twitter.com/qRKBrRFcHN

Wembley, there we go! ? #YNWA https://t.co/ahLouDvLYx

There was also a message from Thiago, currently sidelined with an injury but watching from the stands, who is clearly looking forward to his return ahead of the final.

Meanwhile, Salah was also following from his hotel room in Cameroon, with the Egyptian extending his stay at the Africa Cup of Nations into the last 16:

Spirits are high among the Liverpool squad after two emphatic victories in a row, but the focus will quickly shift back to the Premier League as a trip to Crystal Palace lies ahead.