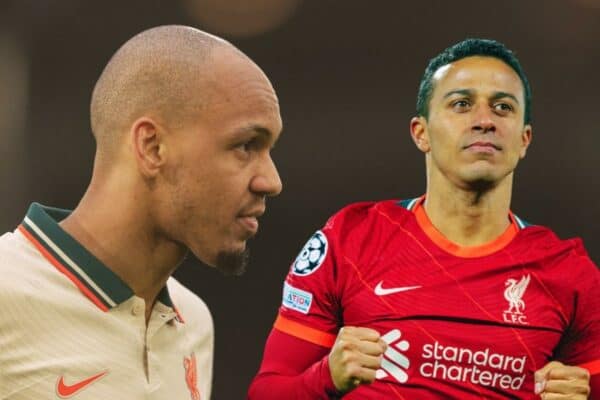 Fabinho and Thiago started in midfield for the first time since December 11 against Leicester, re-establishing a partnership that has fans desperate to see time and time again.

When Fabinho and Thiago both start, Liverpool not only look more assured but the results speak for themselves with 16 wins and a single draw across all competitions.

It’s a duo that Jurgen Klopp would no doubt be eager to utilise more often than has been possible, with Thiago succumbing to various injuries and Covid putting a halt to any plans.

But the hope now is that the Spaniard can string games together and ensure the midfield output against Leicester is a regular sight and not a rarity as it has been of late.

Together, Fabinho and Thiago create a needed balance in the middle of the park, complementing each other and allowing their superior game intelligence to come to the fore.

And their comeback left supporters in only one mind after the win over Leicester, with the question now being who is best suited to sit alongside the pair?:

Fabinho is out of this worldpic.twitter.com/qIQFvUUMCO

This is what an elite 6 looks like. Offers unbelievable screening of the back four, wins the ball back and progressive in his passing.

The relationship between Fabinho & Thiago is so good to watch #LIVLEI https://t.co/AwIXTKSk80

Can't be understated how big Fabinho and Thiago are to this Liverpool midfield. It's those two and then one other, without question.

The control they bring is priceless and they have such a great understanding.

With Alisson and Van Dijk behind them, that's as good as it gets.

Just seen Maddison down the shop picking up a newspaper and pint of milk that Thiago sent him for last night https://t.co/d3Bk5OM8ZC

Thiago with one of his finest performances since joining #LFC; seemed to be everywhere, kept things ticking and had a fantastic understanding with Fabinho. pic.twitter.com/y58N3jnOrf

Fabinho and Thiago together is a joy.

There's no doubt that all of #LFC's big games now require Fabinho and Thiago.

Thiago needs to be protected and played once a week only, maybe a sub appearance on top to build load.

Liverpool’s sustained pressure went up several levels with Elliott subbed on as the right-sided 8 and Thiago moving to the deeper left-sided 8 role & tucking in next to Fabinho as the 6. That midfield trio might very well be LFC’s best combination for the rest of the season.

Why does Thiago improve LFC defensively? It is from phases of play like this – when Fabinho is dragged out of position like with Maddison here, Thiago senses it & positions himself to block the space vacated by Fabinho as “the second 6”. Wijnaldum had this sense. |My cb ||Partey| pic.twitter.com/RpTrQgt0HD

With Liverpool’s squad in an enviable state with every player available to Klopp for the trip to Burnley, the prospect of Fabinho and Thiago together only fuels the confidence for what this team can achieve in 2021/22.

They cover each other and are quick to back up the press, helping to create a solid foundation in the defensive transition and space for their teammates to exploit further afield.

In those 17 aforementioned starts together, Liverpool have conceded just six goals in that time and scored 43 – now to get them on the pitch together consistently!