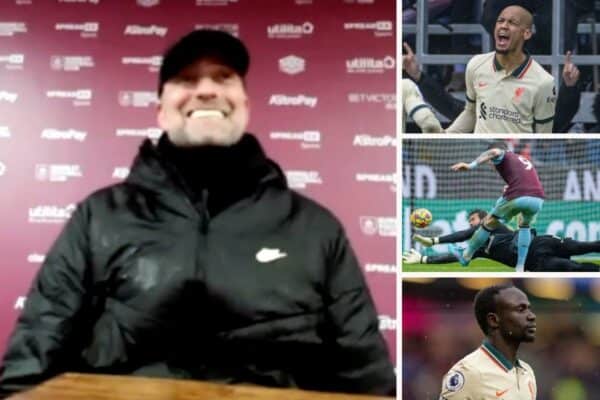 Jurgen Klopp revealed the secret behind Fabinho‘s new-found goalscoring edge after the Brazilian scored the winner as Liverpool came away from Burnley as 1-0 victors.

Ahead of kickoff at Turf Moor, the wind and rain made it clear it was going to be one of those days at Burnley.

The conditions suited Sean Dyche’s side, and Klopp admitted that it required “complete adults football” to get the three points over the line.

“Only if you’re stood on the pitch, I think you could really feel it on a whole extent,” he said.

“Where we were, in front of the stands, it didn’t feel that bad, but on the pitch it was ridiculous because it came from all directions.

“But the boys dealt with it, obviously over the years my team learned to deal with the circumstances – not speaking too much about it before the game, or if so, we asked ourselves to use it instead of suffering from it.

“That’s what happens when you are longer here.”

For the less attentive, the game could have appeared to be playing out more in Burnley‘s favour, rather than Liverpool’s, largely due to the number of late offside calls.

The Clarets were caught offside seven times, and more often than not, the flag went up after the attacking move was allowed to play out – with Alisson making a number of saves and Wout Weghorst missing a handful of ‘chances’.

“I think it felt that they had more moments than they actually had, because of the late offside flag,” Klopp explained.

“There were a lot of situations where we defended them really well then the flag came late, or if Ali made a save he didn’t even put the flag up anymore.

“So it looked really crazy. But that’s the way it is.”

After scoring three goals in his first three seasons with the club, Fabinho has now struck six times already this campaign, with his latest earning victory at Turf Moor.

So what is the secret?

“He probably would have already scored much more goals for Liverpool if I would have put him in the box in offensive set-pieces!” Klopp admitted.

“It’s only recently we put him in, and since then he scores. Great goal, absolutely great goal.”

There was surprise when the teamsheet was released and Sadio Mane‘s name was among the 11 starters, having only returned to training on Friday after his success at the Africa Cup of Nations.

Klopp has revealed “it wasn’t the plan,” however, with a slight injury for Diogo Jota and reluctance to start Luis Diaz in such an unforgiving fixture forcing him to change his setup.

“It wasn’t the plan to start him today, because you know how intense everything was.

“But Diogo had a dead leg, couldn’t train yesterday, that’s why we started Sadio.”