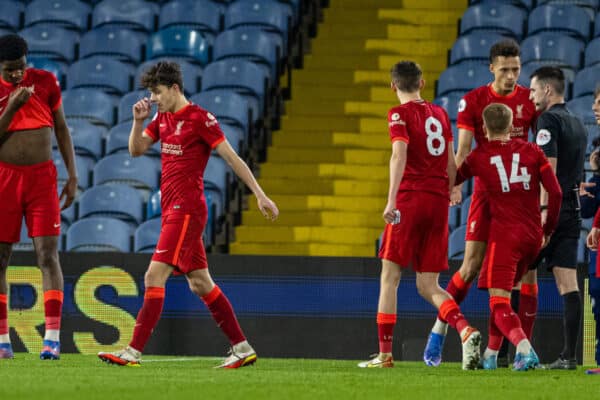 A Liverpool under-23s side featuring seven players on the fringes of the first team suffered a heavy loss at Leeds on Monday night, with two late penalties at Elland Road.

There was a real sense of expectation when the club released their teamsheet for the U23s’ trip to Leeds, with Barry Lewtas able to field a very strong side.

Tyler Morton and Kaide Gordon both started having been on the bench for the FA Cup victory over Cardiff a day previous, while Rhys Williams made his first appearance since returning from Swansea.

Owen Beck captained the side, joined by three other regulars in first-team training in Marcelo Pitaluga, Conor Bradley and Leighton Clarkson.

A careless error from Williams almost gifted Leeds an opener before the first minute ticked by, with the centre-back leaving a loose ball to Crysencio Summerville, who drew a smart stop from Pitaluga.

Stunning play from Morton, taking down a long ball on the turn in the penalty area, should have resulted in a goal for the young Reds, but the midfielder delayed the shot and wasted his chance.

Leeds went in front before the half-hour mark, though, with the dangerous Summerville the creator, his run and finish pushed out into the path of Jack Jenkins, who gleefully converted.

The midfield play of James Balagizi and driving runs of Billy Koumetio were key features for Liverpool, but despite going close on a number of occasions, they were unable to find an equaliser.

A crowd of almost 10,000 were rewarded at Elland Road, then, as Beck was adjudged to have impeded Summerville as he rushed through on goal, earning the captain a second yellow card and Leeds a penalty, which Summerville stepped up to fire home.

With 10 men, Liverpool’s night went from bad to worse soon after, as Clarkson hacked at the foot of Summerville in the box and, with the Dutchman off the pitch receiving treatment, Max Dean scored the spot-kick to clinch a 3-0 victory.

It was a frustrating result for a Liverpool side that perhaps should have expected to win the game, but it will be a vital learning experience for those hoping to break through under Jurgen Klopp.