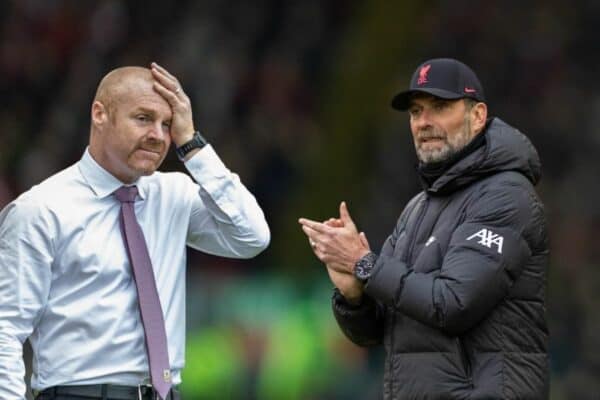 Weghorst vs. Van Dijk and key battles out wide – Burnley’s threats and weaknesses

Virgil van Dijk will be tasked with thwarting the giant Wout Weghorst this weekend, as Burnley fans dream of a shock win over Liverpool.

The Reds won 2-0 at home to Leicester on Thursday evening, keeping the pressure on Premier League leaders Man City.

Next up is the weekend trip to Sean Dyche’s Burnley, who finally look like they could fail to stave off the threat of relegation.

The Clarets sit bottom of the table going into Sunday’s game, albeit with two games in hand, but they will at least be buoyed by their 1-1 draw at home to Man United in midweek.

Ahead of the game, we spoke to Matt from the No May Never podcast (@NoNayNever) to get the lowdown on Burnley‘s relegation fight, Liverpool’s quality and some key match-ups.

How do you assess Burnley’s season so far?

Short answer – worrying. It’s really not been easy to watch at times.

We’ve dropped points from being ahead against teams we are capable of beating and not been able to score against direct relegation rivals.

That is relegation form and many Clarets are already resigned to our time in the Premier League finally coming to an end.

Despite the new owners spending and trying to invest further in the squad, under-investment over the past three years has finally caught up with us.

Does your gut feeling say you’ll beat the drop?

It’s really tricky to call at the minute with everyone having played different amounts of matches.

With Norwich drawing on Wednesday night, winning our games in hand would lift us out of the relegation zone, which gives you hope that we are currently not depending directly on others dropping points.

Having only managed one league win since May 10 when we secured another top flight season, you can be forgiven for not seeing us suddenly finding a bunch of wins to pull off the great escape, though.

The difference could well be Wout Weghorst, combined with Maxwel Cornet and Jay Rodriguez.

After an underwhelming debut against Watford, big Wout impressed in the second half against Man United, forcing a top save out of David De Gea and providing an assist for ‘Jay Rod’, which included a turn that sent Harry Maguire for a bovril and pie.

We’ve lacked goals this season to convert many draws into wins – if Weghorst can start finding the net, the escape could still be on.

Who have been Burnley’s three best players this season?

Currently ahead by a mile is Cornet.

I can’t remember the last time a player had such an impact on the team and fans so quickly after joining, scoring multiple Goal of the Season contenders against Leicester, Palace and Leeds, before heading off to feature briefly for the Ivory Coast at the Africa Cup of Nations.

He has looked a little rusty since returning, but should hopefully provide some much-needed creativity for the second half of the season.

Following behind him has to be our central defensive partnership of James Tarkowski and Ben Mee.

Despite a few uncharacteristic individual errors by ‘Tarky’ and the constant circulation of rumours of where he will inevitably move to this summer, he has proven time and again that he is a class act and will enhance whichever club wins the race for his signature on a free in the summer.

Mee is as consistent as ever, recently chalking up 10 years at the club and is a true leader on and off the pitch.

Despite being out of contract in the summer, there seems to be no reason why he won’t sign on again to see out his career here.

If you had asked me a month ago I would have talked about Chris Wood, but he’s no longer our concern.

Watching Newcastle fans tweet their frustration at what £25 million has got them is a new favourite matchday distraction for Burnley fans.

So attention turns to our midfield and in particular young Dwight McNeil, who until the arrival of Cornet and in his absence, was our main creative outlet once more.

That continues to be a big weight for his slight frame and relatively young head to carry and he has struggled to deliver the balls that Wood thrived off in previous seasons.

McNeil has also been asked to do more defensive work and has the stats to back up that he has been doing his fair share to help out Charlie Taylor and Erik Pieters, but this then means he’s not further up the field to tie full-backs in knots.

Also struggling to impress and excite the fans this season are our midfield quartet, in particular Ashley Westwood and Josh Brownhill, whose attempts to high press teams has left our defence exposed.

Opponents have taken advantage of it, leading to the dropped points mentioned earlier.

Turning our attention to Liverpool, how do you assess their title hopes?

Despite having the same number of defeats as Man City, it seems the Mancunians are in ruthless mode again this season and it is clearly now their title to lose.

Twelve points seems a bridge too far, but win your games in hand, beat City in the reverse fixture and that suddenly becomes a three-point gap, so maybe there’s life in the title race yet.

Apart from Salah, which Reds player would you most like to see at Burnley?

Considering our weakest area at the moment is our midfield, I imagine James Milner or Jordan Henderson would make very good Sean Dyche players with a high work rate, professionalism and a smattering of quality.

It will be interesting to see how Weghorst gets on against Virgil van Dijk, both in the air and on the ground.

If Cornet recovers from the cramps he went off with against United, then his battle with Andy Robertson should prove intriguing.

This quite simply depends on which Burnley turn up. There have been a few matches this season that we thought were turning points, only for the poor performances to reoccur.

Tuesday night’s second half felt like it could be THE turning point, and if that Burnley show up then we could see a tight contest that could be decided by a single goal.

With Mohamed Salah and Sadio Mane back in town, however, you could prove to be too strong for us once again.