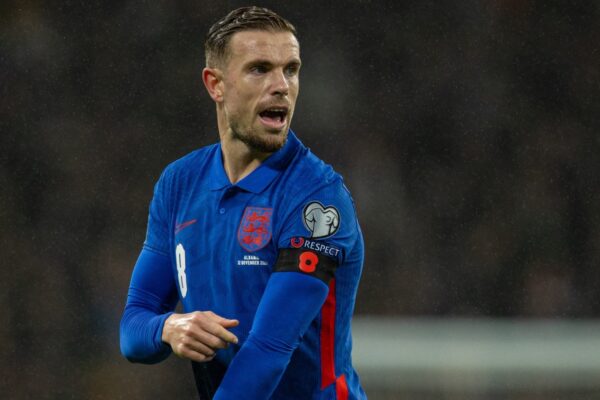 England will play Ivory Coast for the first time in their history this month, with two Liverpool players named by Gareth Southgate for a friendly double-header.

Having already qualified for the World Cup, England will use the upcoming international break to prepare for the tournament with two high-profile friendlies at Wembley.

The first is up against Switzerland on March 26, followed by a first-ever meeting with the Ivory Coast on March 29 – which is also the Three Lions’ first clash with non-European opposition since late 2018.

Jordan Henderson and Trent Alexander-Arnold have both been named in Southgate’s squad, which also features a first-time call-up for Crystal Palace defender Marc Guehi.

The likes of Alex Oxlade-Chamberlain and Joe Gomez have been overlooked as they remain out of consideration due to a lack of game time, while Curtis Jones and Harvey Elliott are expected to be in the under-21s squad.

Back in 2018, England played two African nations in Nigeria and Tunisia, but this will be the first time they have faced the Ivory Coast.

It will be a familiar atmosphere for many players, however, with the Ivory Coast including the likes of Wilfried Zaha, Nicolas Pepe, Eric Bailly, Maxwel Cornet and Max Gradel.

The Switzerland friendly, meanwhile, will see Henderson and Alexander-Arnold reunited with Xherdan Shaqiri, who left Liverpool for Lyon in the summer only to move again in February to join MLS franchise Chicago Fire.

Shaqiri was brought off during the last meeting between the two countries in the UEFA Nations League third-placed playoff in 2019, missing the eventual penalty shootout as England won 6-5.