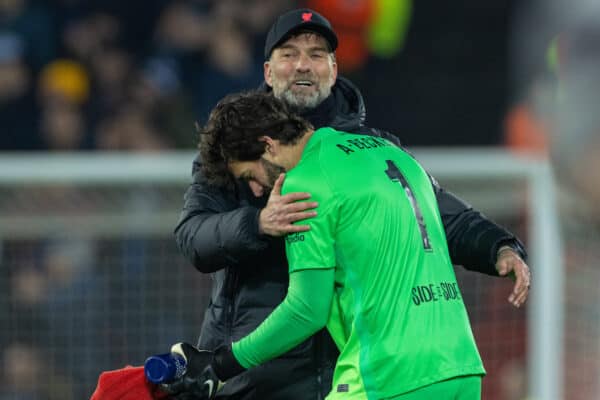 Liverpool face defining 10 days ahead to keep every plate spinning

Through to the quarter-finals of the Champions League we go, all be it with a defeat at home to Internazionale, with an FA Cup quarter-final on the horizon and a Premier League title chase to keep up.

From our end of the East Lancashire Road, we’ve watched Manchester City juggle with the theory of a quadruple a few times in recent seasons, and we are now entering that mid-March toward mid-April span where they’ve found they can’t really keep every plate spinning.

A League Cup in the bag, the race condenses marginally into a shot at a trio of extra trophies, each of which is higher up in the footballing food chain than the one we have so far gained. This is where the quadruple chasing team is so stretched that they almost become translucent.

You must follow the old adage of taking things one game at a time, but this is only a rule that works for players and supporters.

Jurgen Klopp can’t operate in such a manner, certainly not within the circumstances he and his team find themselves in. Every game we are currently taking part in has a domino effect upon the next two or three. You can’t plan such a demanding run-in on the hoof.

This side of the upcoming international break, we face three away games that could feasibly see two of the three trophies we’d like to win disappear.

Back-to-back Premier League trips to face Brighton and Arsenal will be followed by us heading to the City Ground for the first time in almost a quarter of a century, to go up against Nottingham Forest in the last eight of the FA Cup.

Between the games against Arsenal and Forest, just for the added pressure, we will be handed information about the route we will need to take if we are to be in attendance at the Champions League final, in Paris, on May 29.

Our game against Arsenal is the one we will be making up for due to our presence being required at the League Cup final, while as soon as we’ll have clawed that one back, we will then need to crowbar our game with Manchester United into the fixture list somewhere, as we have FA Cup duties to fulfil a week on Sunday when we would have been welcoming Ralf Rangnick’s dysfunctional team to Anfield.

Overcome Forest, which is, of course, doable, yet without being all that simple, and we will then have to rearrange our scheduled mid-April trip to Steven Gerrard’s house. Win a projected FA Cup semi-final that weekend and the final lands on the same weekend as we are due to travel to Southampton on the penultimate weekend of the Premier League campaign.

If we were to reach the Champions League semi-finals and the FA Cup final, then we will have just three blank midweeks between now and the season’s end, in which to fit the three Premier League fixtures we would need rearranging.

Oh yes, and for good measure, sat between the two legs of the Champions League quarter-finals will be our Premier League trip to the Etihad to go up against Manchester City, who, you know, we could even be playing against in the Champions League quarter-finals — the second leg of which is directly followed by that potential FA Cup semi-final, where you know what, we could even end up playing Manchester City.

Much of the above still represents lots of very extreme ifs and buts, yet plenty of it is very much for real. Therefore, Klopp can’t operate under a mantra of one game at a time, no matter what he might say publicly.

It is a mad helter-skelter ride and already we are showing the first signs of being stretched.

We bounced through February with a spring in our step, but the League Cup final was hugely demanding at the month’s end.

Since Wembley, our Premier League and FA Cup victories against West Ham United and Norwich City were not without us hitting an almost careless cruise control within periods of both games and now we have lost at Anfield, against Internazionale, although progressed thanks to our first leg endeavours at the San Siro.

It is perhaps fair to suggest that we’ve kind of been winging it a little since Wembley.

Just as well that we are pretty good at winging it, I suppose. No huge harm done in many respects, but when placed upon a wider month that is beginning to look a little fatigued at least, then the next three games that Liverpool will play, which are set across a nine-day span, will be the amplifier to what we can achieve the other side of the international break. An international break that most of our players are going to be involved in.

Something will likely give way somewhere, maybe even a couple of things will give way, but the trick is the positivity of response when/if that does happen.

I would be delighted if Liverpool have to play every three days between now and the Champions League final week, but if one or even two wheels eventually drop off, as often happens to quadruple chasing teams at this time of the season, then the task is to emerge from the dust of May with another trophy of substance in our hands.