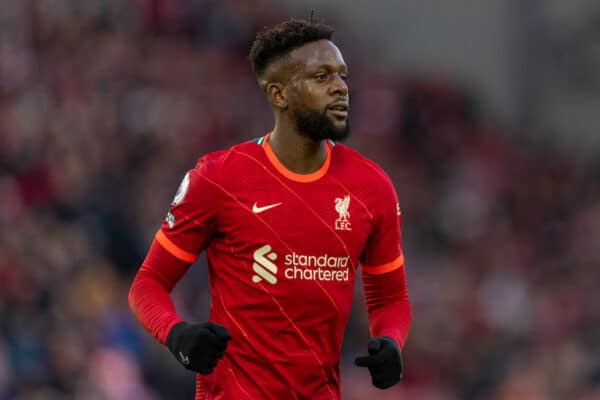 2 Liverpool lineups vs. Everton – with a Merseyside derby curveball

For whatever reason, the Merseyside derby is often the occasion in which Jurgen Klopp throws a curveball, but it remains to be seen whether he will on Sunday.

Klopp is certainly not averse to a surprise call for the derby – and so often it has paid off, with the Liverpool manager boasting a record of eight wins, five draws and only one loss against Everton.

Sunday brings the 240th Merseyside derby and the two sides divided by Stanley Park could not be much further apart; one firmly in the title hunt, the other battling relegation.

However, the balance of Liverpool’s quadruple bid, with just over a month to go until the end of the season, makes Klopp’s selection a particularly difficult task this weekend.

Liverpool remain in a remarkable position for the run-in, with only one absentee ahead of the visit of Everton.

Roberto Firmino was expected to return to training after a minor injury on Friday, but not having joined the group for that session it is likely he will now miss the derby.

“If Bobby gives the thumbs up then he will be involved but if not we wait another few days,” Klopp told reporters.

“After that, I think it should be possible.”

The Merseyside derby comes on the back of the longest break in games for Liverpool between now and the end of the season – that being a total of four days off.

While Klopp has been mindful to rotate his squad throughout this relentless stretch, the relative recess this week could see the majority of those who started against United retained.

However, there is a chance of changes in defence, midfield and attack, with competition rife:

With those three alterations, Liverpool would line up as below:

Could there still be time for one more big moment from Origi?

The Belgian has not started since the 2-1 win over Norwich in the FA Cup, and not in the league since the 3-1 win at West Ham in January 2021, but he is a derby specialist.

And given Klopp’s penchant for a twist in these unpredictable occasions, there is a chance he turns to Origi for one of his final outings for the club.

Another player made for the Merseyside derby is Jones, and with Villarreal to come on Wednesday night, the Scouser may be turned to in order to preserve Thiago:

This would see Liverpool line up as below:

Every game now, it is almost impossible to predict exactly how Liverpool will line up – but that is especially the case when it comes to the Merseyside derby.

The odds are, of course, that Klopp goes as strong as possible despite Everton‘s troubles, with no room for error between now and the end of the season.