An all-important advantage in the title race is on the line as Liverpool meet Man City and Jurgen Klopp has made three changes from midweek, with Diogo Jota one of the front three at the Etihad.

The day is finally here. The Reds arrive in Manchester with a chance to leapfrog Pep Guardiola’s side and move two points clear at the Premier League summit.

Against a side Klopp described as “insane,” the task is as tough as it gets but with a 10-game winning streak in the league behind them, Liverpool have put themselves in the best position possible.

Much of the pre-match talk centred around how the Reds’ front three would look and the manager has now made his choice.

Alisson will prove pivotal in goal again and is to sit behind a back four of Trent Alexander-Arnold, Joel Matip, Virgil van Dijk and Andy Robertson.

In midfield, Fabinho will continue masterfully in the No. 6 role alongside Thiago and Jordan Henderson.

And making up the front three is Mohamed Salah, who has seven goals in 12 appearances against City, Sadio Mane and Diogo Jota.

It still leaves Liverpool with an incredibly strong nine-man bench to turn to if and when required today, including Luis Diaz and Roberto Firmino. 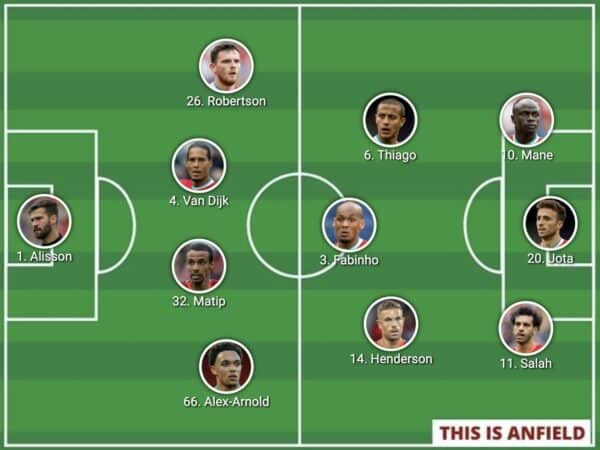