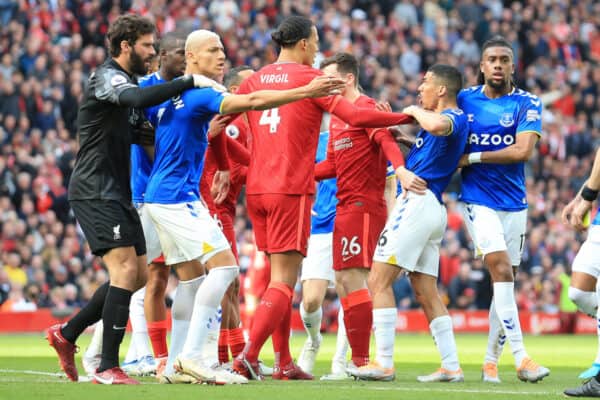 Everton manager Frank Lampard believes his side were denied a clear penalty which could have had a decisive impact on their 2-0 Merseyside derby defeat.

With the game still goalless early in the second half Anthony Gordon, who had been booked in the first half for diving in the area, went down under a clumsy-looking challenge by defender Joel Matip.

Gordon left the stadium complaining to a member of the backroom staff about why the incident had not been referred for review and later Tweeted a video clip of the incident accompanied by two face-palm emojis.

Lampard felt the officials made an error.

He said: “It is a penalty in the second half. I don’t think you get them here. I think if it is Mo Salah at the other end, you get a penalty. I have played in teams in the top half of the league, you get them.”

Defeat left Everton two points from safety, having dropped into the bottom three before kick-off after Burnley’s win over Wolves, with Chelsea to come to Goodison Park at the weekend.

“It (the Burnley result) doesn’t change it. I expected them to get a result today. We can’t get caught up in a game of what everyone else is doing,” Lampard added.

Everton lost defender Ben Godfrey to injury in the warm-up but Lampard is hoping it will not turn out to be serious.

“It was bad luck, a muscle injury. Michael Keane comes in against Liverpool’s attack with 20 minutes to go and it was a compliment to him and how he handled it.”

The win maintained Liverpool’s pressure on Manchester City, who lead the Premier League by a point.

Manager Jurgen Klopp’s substitutions – and a change to a more attacking system – helped turn the result in their favour as within a couple of minutes of sending on Luis Diaz and Divock Origi the latter had a hand in the build-up to Andy Robertson’s opener.

Origi then scored a close-range header himself with five minutes to go, further enhancing his Merseyside derby legacy with his sixth goal in nine matches against Everton.

“The situation in the table is clear for us, it’s not news, but if you want to win the game you have to change things,” said Klopp.

“Was it brave? We tried to adapt the game as well in the protection, Anthony (Gordon) was on his bike a couple of times, we cannot leave Joel constantly there alone, it makes no sense.

“We told Trent (Alexander-Arnold) to play from a little bit deeper and we wanted Fab (Fabinho) on that side as well, so we knew where the threat was coming from and still couldn’t always defend it in the first place.

“In football if you don’t take risks you cannot win a football game. It was obviously easy to improve from the first half and we did, that’s why it was all good.”