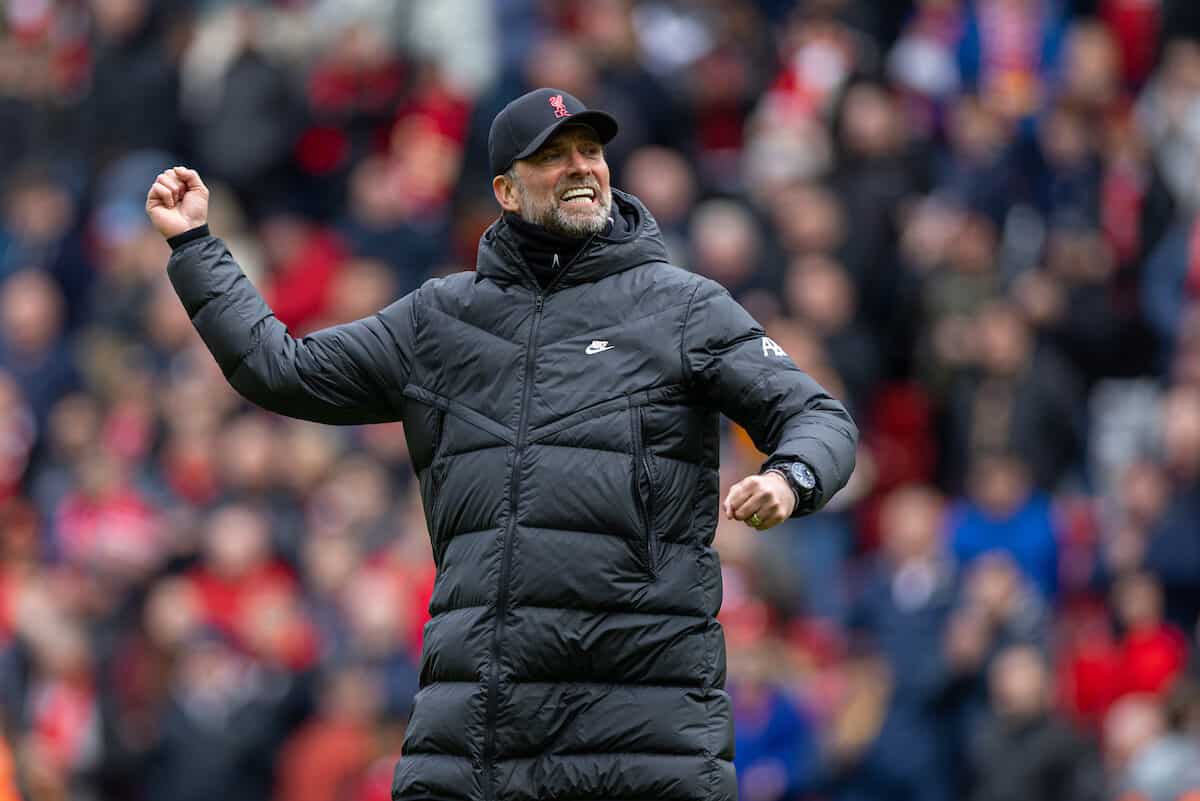 Liverpool’s battling 2-0 win over Watford was dissected by the watching media, as Thiago and Joe Gomez received numerous plaudits.

Jurgen Klopp‘s team hosted the relegation-threatened Hornets on Saturday afternoon, as they looked for a 10th Premier League triumph in succession.

Diogo Jota bagged his 20th goal of the season to put Liverpool 1-0 up before half-time and Fabinho completed the scoring from the penalty spot late on.

Here’s a look at how the media reacted to the Reds’ latest win.

The hard-earned nature of the victory was focused on… 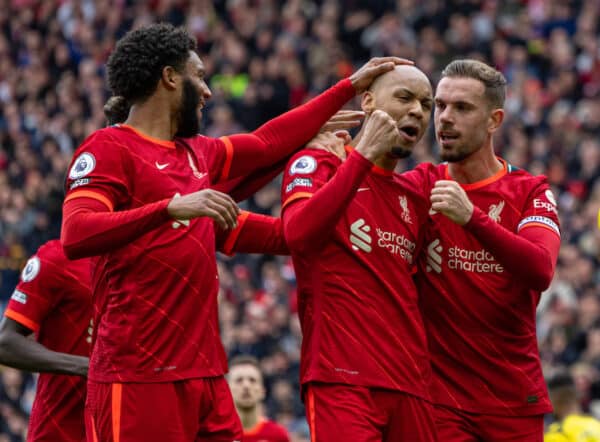 The Guardian‘s Andy Hunter stressed that the result was more important than the performance:

“The relentlessness of Liverpool will trouble Pep Guardiola more than the form of his only rivals for the Premier League title.

“Jurgen Klopp’s team were far from their fluid, dominant best against relegation-threatened Watford but that was an irrelevance alongside a 10th successive league win that took Liverpool top before Manchester City’s visit to Burnley.

“They were strong rather than stylish against an awkward opponent, clinical more than creative with Mohamed Salah quiet on his return from an arduous international break, but they got the job done yet again.”

The Telegraph‘s Chris Bascombe also recognised the Reds not being at their fluid best, but their will to win shone:

This was Liverpool’s tenth consecutive Premier League victory, and tenth consecutive home win in the league. That such a recovery has given them a 50-50 chance of the title rather than made the final eight games a formality is a tribute to the extraordinary level of both contenders.

Liverpool predictably oozed class and control without being at their most penetrating. They led from the 22nd minute when Diogo Jota demonstrated why he evokes memories of Robbie Fowler. Jota’s movement, his ability to finish as elegantly with either foot, and heading prowess – which defies his relatively small stature – is pure Fowler.

Thiago was a joy to watch for Liverpool, while Gomez was also praised… 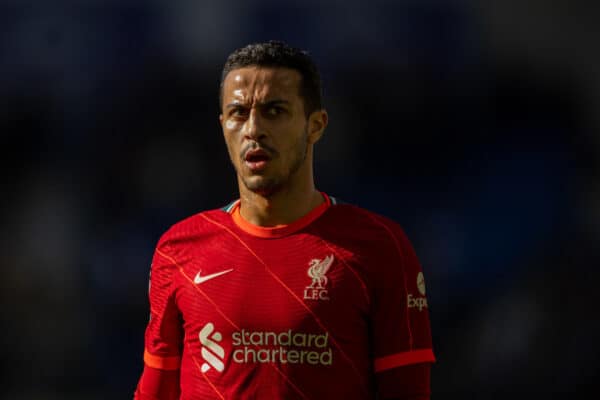 This Is Anfield‘s Mark Delgado was hugely enamoured with Thiago‘s brilliance”:

“Thiago was an absolute nonsense, with first touches and fizzed passes unequalled by anyone on the pitch, with added ball-winning, recycling and pushing forward into dangerous areas for good measure.

“Best player of the match.”

Chris Doyle of the Mirror heaped praise on Gomez in Trent Alexander-Arnold‘s absence:

“Trent Alexander-Arnold was only able to make the bench after picking up an injury before the international break. Gomez came in at right-back for Liverpool, as a result, but the defender was a capable replacement going forward.

“Alexander-Arnold would have been proud of Gomez’s ball into the box that found Jota for the opener. He channelled his inner Trent to whip in an impressive ball into one of those areas that is impossible to defend against. The former Wolves man just had to direct it goalwards.

“Gomez did struggle defensively out of his favoured center-half position. He appeared isolated at times and committed a number of needless fouls on the right-hand side before eventually picking up a booking.” 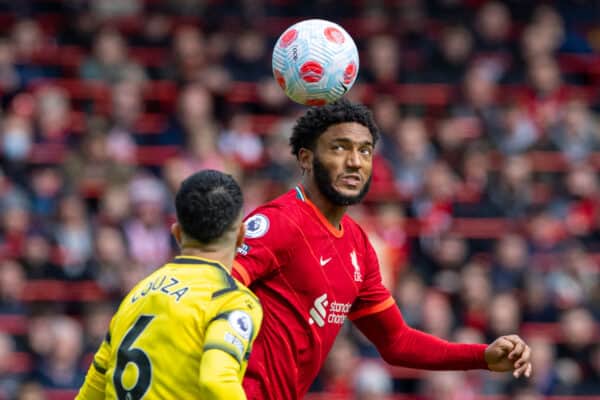 Goal‘s Neil Jones was similarly smitten with the 24-year-old’s showing:

“If you squinted, it could easily have been Trent Alexander-Arnold.

“A Liverpool right-back, bursting forward and crossing with pace and precision, finding the perfectly-timed run of the forward?

“We’ve definitely seen that before.

“Joe Gomez is a somewhat reluctant full-back these days, but that doesn’t mean he’s an ineffective one. And here, he showed just how useful a stand-in he can be.

“His inch-perfect delivery allowed Diogo Jota to score the opening goal as Liverpool went top of the Premier League, temporarily at least, with a 2-0 win over Watford at Anfield on Saturday afternoon.” 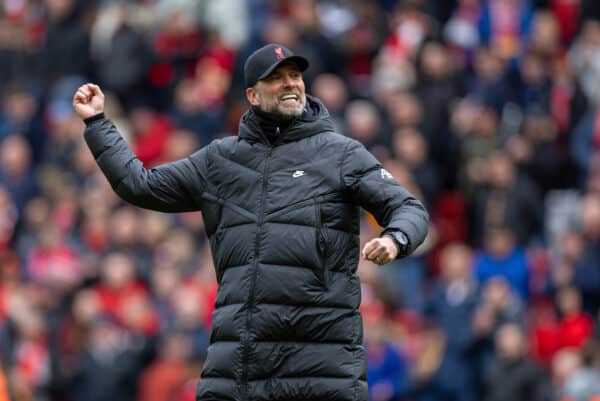 Jones described this as “heady days” for Liverpool, in what is a huge period in their recent history:

“Victory over the Hornets, who fought gamely but remain haunted by fears of relegation, was a 10th league triumph in a row for Jurgen Klopp’ side, and means they start the final stretch of the campaign as they finished the last one: winning.

“These are heady days for Liverpool, the next two months stretching ahead and glistening with opportunity. History is there to be seized, an unprecedented quadruple of trophies there to be collected.

“They were 16 games from greatness this morning; now, they are one closer. They’ll need to play better than they did here, but they’re still in there. How exciting is that?”

The Daily Mail‘s Rob Draper couldn’t help but mention next Sunday’s trip to the Etihad:

“Doubtless it was an illusion which will be put right when Manchester City complete their game at Burnley this afternoon, but nevertheless in the battle of mind games that characterise the best title duels, it remains hugely significant nonetheless. Liverpool are top of the table.

“‘We shall not, we shall not be moved,’ chanted The Kop. They probably will within hours but their confidence was not over played.

“Momentum is everything in title run-ins and Liverpool undoubtedly have it. Roll on Sunday and the Etihad title showdown.” 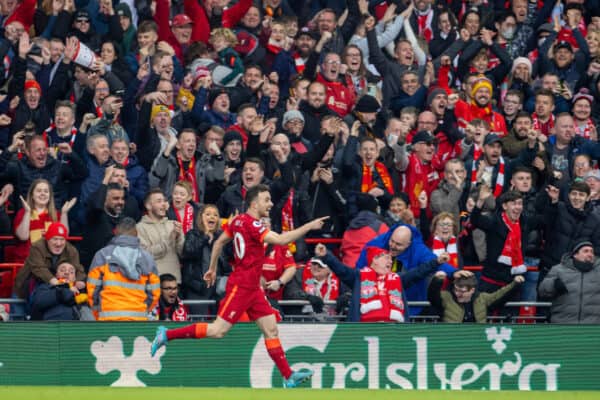 Finally, Delgado made sure we all knew that the quadruple was still very much on:

“Ten straight wins in the league at Anfield and it’s 19 unbeaten now in the top flight on home soil, stretching back to last term. Liverpool FC are top of the Premier League.

“Klopp and Co have to immediately switch focus though, with the Champions League also in our sights.

“Benfica is fast-approaching and we’d expect a few changes there again, with Trent, Fabinho and perhaps Luis Diaz, given his familiarity with the opponents, among those we’d expect to return to the line-up.