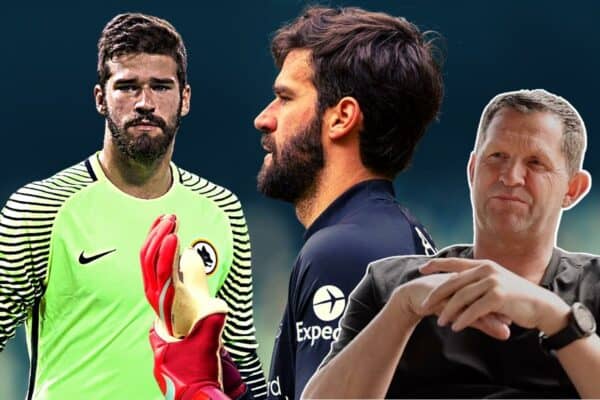 The role of the football scout has changed massively in recent years, as Liverpool goalkeeping coach John Achterberg has detailed in a This Is Anfield exclusive.

Gone are the days when a scout will be on the road more often than they were at home; the advances of technology mean attending games is no longer the go-to method.

Instead, with footage of any game available at the click of a button, top-level coaches and scouts are more often turning to online resources such as Wyscout.

As Achterberg – who has worked with Liverpool since 2009 and is now in the role of head of goalkeeping – told This Is Anfield, that has revolutionised his scouting process.

The Dutchman outlined the events that led to him tracking Alisson, five years before he made the move to Anfield from AS Roma, with it “not a small job.”

“Well, 2013 was the first time I saw him, when he played at Internacional. I asked Doni if there were any goalkeepers out in Brazil who I should look at and he said ‘yeah, look at Ali’,” he recalled.

“I always get information from other people and I also go through all the leagues to see if new goalkeepers have appeared.

“I always try to watch one game, and if I like it, I keep following them.

“It’s not a small job and I started it when I came to the club on the first day.”

Achterberg tracked Alisson for four years before even seeing him in the flesh, which came by chance as Liverpool took on Roma in a pre-season friendly in 2016.

The Brazilian’s progress was instead charted from afar, while Achterberg utilised the club’s extensive scouting staff to further analyse a player who would go on to become Liverpool’s most expensive goalkeeper.

“Nowadays, it’s easy to watch everything. You can watch all the goalies on the scouting network so I never go to games,” he continued.

“If I drive to Birmingham to watch a goalie, I can watch the same goalie play three or four games on the bounce [in the same time]. Timewise, it doesn’t make sense if I can see it on my laptop and I know if the movements and positional sense are good.

“I do my homework there. We have a lot of scouts who can do work on it, too. It’s a big process and I’m only a part of it.

“The first time I saw Ali live was in the USA when we played Roma in a pre-season friendly. I had already told the boss about him and then obviously he liked him in that game.

“We had also talked about other goalies too: when Neuer was still at Schalke, when Handanovic was at Udinese and Ter Stegen was in Germany at Gladbach. I talked about them as well.

“If it happens or doesn’t happen, that’s not in your hands.

“Now we spend a lot of money and the owners wanted to try and find the best goalie out there – I told the boss ‘that’s the only goalie I would pay the money for’.

“The boss then decides – he is in charge of that.”