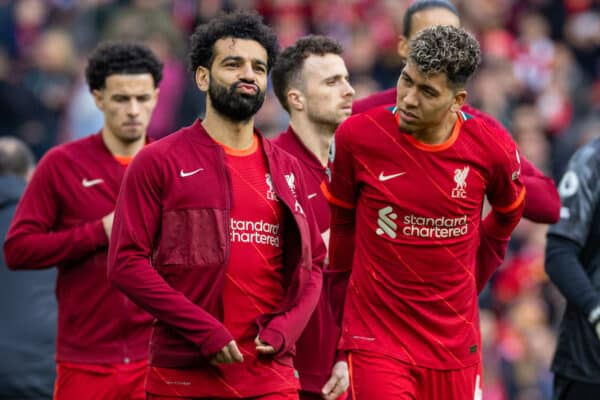 The Egypt international has not scored from open play since February 19 and his last couple of performances, at home to Watford and away at Benfica on Tuesday, have been well below the standard expected of the 28-goal forward.

Salah, who has experienced heartbreak at international level by losing the Africa Cup of Nations final and a World Cup play-off – both to Senegal – in the last two months, has looked like a player whose 47 appearances for club and country this season are catching up with him.

Were he not who he is, with the record he has in the Premier League for the club, there would be considerable doubt over his place in Sunday’s team as he is arguably the least in-form of Klopp’s five forwards.

However, dropping him against City is almost unthinkable because of the message it would send out before kick-off.

“Yeah, big-game experience helps, definitely. It is not the only important thing you consider when you make a lineup but it is one of these,” said Klopp.

The Reds boss had said after Tuesday’s win over Benfica that Salah, for whom speculation over a contract which expires next summer continues to grow, appeared to have been influenced by “stories” around him.

However, he clarified that remark in his pre-match press conference by stressing he was referring to the talk about his workload and international disappointment, rather than any focus on his contractual issues.

“I didn’t know about the stories behind it, it was the ‘stories’ what we thought about intensity – not the stories that were written,” he added.

Liverpool head to the Etihad just a point behind City, having reeled in a 14-point deficit they had in January.

Klopp’s career in Germany before he arrived at Anfield had been forged on his sides being over-achieving underdogs but his record since coming to England has shown they can equal the best.

“The main difference between Borussia Dortmund-Bayern Munich and Liverpool-City is that at Dortmund we lost important players every year, Bayern never.

“If you leave Bayern it is pretty much because you retire or finish your career or something like this or you don’t play at all.

“If you played an outstanding season at Dortmund, there were a lot of clubs who could be interested and very often it was Bayern themselves.

“That’s the difference in the situation, clearly. That’s why we could build here. We are much more equal at least than we were with Bayern.

“We had last year which was not great but even that we could build on because we knew why it happened.

“I don’t care if we are equal but we are much closer than we were with Dortmund, that’s for sure.”