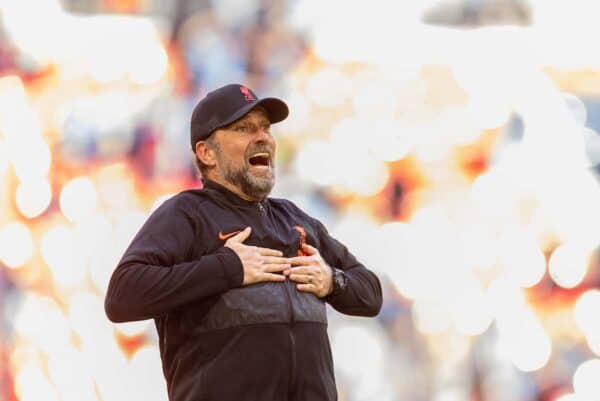 Jurgen Klopp believes he witnessed one of Liverpool’s best first-half performances in his time as Reds manager during their FA Cup semi-final victory over Manchester City.

Having been dominated by City in the opening 45 minutes of their drawn Premier League encounter at the Etihad Stadium last Sunday, the Reds came flying out of the blocks at Wembley.

Ibrahima Konate’s header – his third opening goal in as many matches – was followed by a brace from Sadio Mane as they went in at the interval 3-0 up.

City’s fightback saw them score at the start and end of the second half but the work Klopp’s side had done earlier on saw them through a tight finish.

Asked whether it was one of the best first-half performances he had seen from his side, Klopp said: “I think so, that was the feeling I had when I saw the first half, (because of) the quality of the opponent – which you saw in the second half how good they really are.

“Denying them in so many moments, creating your own opportunities, using them is very difficult: the first half was outstanding in pretty much all parts of the game.

“Second half they score (early) and no football player on the planet feels safe against City with a 3-1 lead.

“Three-nil against City feels kind of strange, 3-2 is a fair result.”

Liverpool’s win kept their quadruple hopes alive but City will now have to focus all their attention on the Premier League, which they lead by a point, and the Champions League.

After two 2-2 draws this season this was the first time one side had got the upper hand on the other, but Klopp did not see it as getting one over on their rivals.

“I don’t have enemies in football. I have been at Liverpool seven years and I know who our rivals are. I count 19 in the Premier League and City are the best team in the league in my time here,” he said.

Klopp has maintained adding the Premier League, FA Cup and Champions League to the Carabao Cup they won in February remains unlikely so he is reluctant to give their claims much credence.

“You can mention whatever you want. It doesn’t make it more likely that you get the answer you want from me,” he said when asked about the quadruple.

“I think a game like today shows even more how unlikely it is to do something like that.

“We went through against City, which is incredibly difficult and intense, and in three days we play against Manchester United and historically it’s not a friendly game.

“A few days later we play Everton, in the situation they are (battling relegation) will not be a friendly game, then we play Villarreal (in the Champions League semi-final).

“It’s (the quadruple) really unlikely but I couldn’t care less to be honest: let’s go for it and try to win the next game.”