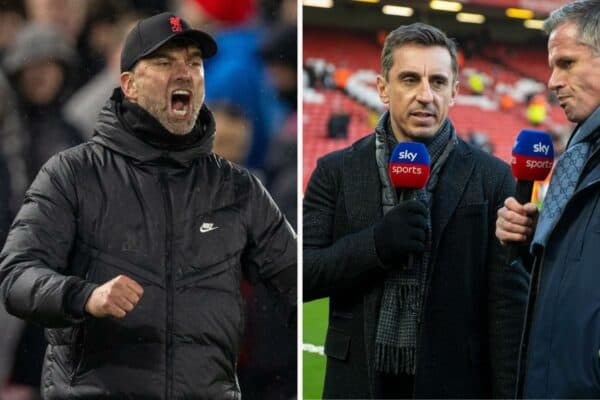 Liverpool manager Jurgen Klopp is fine with aggression on the pitch but insists no team can solve their own problems by hurting the opposition.

The 240th Merseyside derby on Sunday is typically the sort of match when emotions can get the better of players, with recent history evidence of that.

Last season’s encounter at Goodison Park was the day when their title defence started to unravel as they lost key defender Virgil van Dijk to an anterior cruciate ligament injury after Jordan Pickford’s reckless challenge.

They also had midfielder Thiago Alcantara sidelined for more than two months after a wild tackle saw Richarlison sent off in the final few minutes.

Everton’s dire league situation, they are currently one point above 18th-placed Burnley and may even be in the bottom three by the time they kick off at Anfield, and Liverpool’s brilliant form means they will have to put up even more of a scrap.

And while Klopp stressed he was not sending a message to their near neighbours, he acknowledged Gary Neville’s admission he had been “unprofessional” in his co-commentary after praising Manchester United youngster Hannibal Mejbri for coming on in Tuesday’s 4-0 drubbing and kicking a few Liverpool players, narrowly avoiding a second yellow card in a six-minute cameo.

“He had to apologise for that, rightly so. I understand where he is coming from,” said the Liverpool manager.

“Obviously you want to see some aggression, but there is a difference between aggression and kicking players. It makes no sense.

“Aggression in football means you are ready to hurt yourself, not the other one. I don’t blame the kid, he came on and the game was a bit quick and he was a bit late here and there. It’s all good.

“Aggression in football is absolutely fine but you cannot sort your own problems by hurting the opposition players, that is what I have never understood.

“I played 325 professional football games and without aggression and physicality I would have played none. It wasn’t my only strength and I am completely fine with it but stay respectful, that’s all.

“Of course things can happen in football, it is a high-speed game, but not these kind of things where you don’t care about another colleague who wants to play again in a few days’ time as well.

“You don’t have to close spaces by knocking someone down so that they cannot walk any more.

“I know what people will make of me talking about aggression and Everton and all these kind of things – it’s not what I’m saying.

“All of a sudden it will be like ‘Klopp wants Everton to do this’. No I don’t. You ask me and I talk about it.

“We are ready for each kind of challenge, just keep it within the big frame of rules and everything will be fine.”