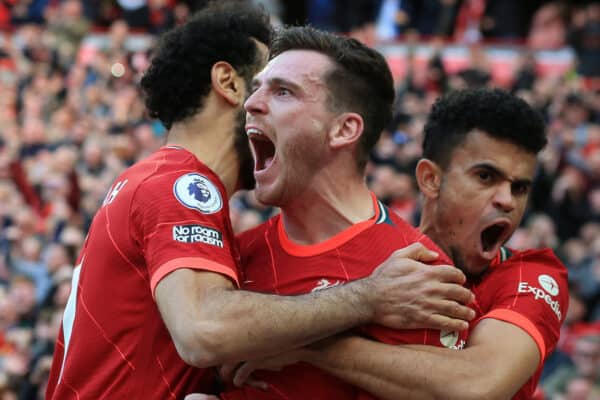 Liverpool battled their way to an ugly 2-0 win at home to Everton on Sunday afternoon, with Andy Robertson and Divock Origi the heroes at Anfield.

Given Liverpool’s dominance in possession, this was a largely quiet afternoon for Alisson.

The Brazilian had nothing to do in the opening 45 minutes, proving to be as much of a spectator as those behind him in the Kop. Everton didn’t muster a shot on target until injury time…

Got away with one dodgy punched clearance after the break and then nervously fired into touch.

If this wasn’t Alexander-Arnold’s poorest performance of the season, it’s hard to think of any that top it.

The local lad looked too emotional from the off and his all-round game suffered because of it, with endless passes failing to find their man.

Improved in the second half, though.

Matip retained his place at the heart of the defence, and while he was reliable off the ball, there was a lack of usual quality on it.

Like so many, he lost the ball cheaply in the middle of the park, as Everton defended with 10 men behind the ball.

Did well in thwarting two Blues counter-attacks, but also troubled by Anthony Gordon.

Van Dijk will have far more testing days at the office than this, with the Dutchman spending much of the game watching the action unfold in front of him.

He dealt with aerial duels when he needed to and was typically calm, but arguably allowed Abdoulaye Doucoure to be played in too easily in the first half.

Andy Robertson – 9 (Man of the Match)

Robertson was magnificent against Man United in midweek and this was another big performance from the left-back.

While he struggled to link up with Diogo Jota down the left flank in the opening 45 minutes, he was a far better threat after the interval.

The Scot headed home the header – a potentially huge moment in Liverpool’s season – before celebrating in wild fashion. What a man.

Fabinho continued in the No.6 role he masters, but this wasn’t his most vintage showing of the season.

A lack of guile was evident at times, as Liverpool struggled to create, and he arguably got dragged into scraps with Everton players too often.

After a simply majestic performance in midweek, Thiago didn’t manage to have quite the same impact at Anfield.

That’s not to say there were positive aspects to his play, though, with a number of tackles made and some nice threaded passes.

The good outweighted the bad, without question.

Keita was preferred to Jordan Henderson in midfield and he failed to stamp his authority on proceedings in a feisty match.

The 27-year-old was guilty of being slack in possession and not offering any thrust, as the game passed him by for long periods.

That being said, he kept things neat in the second half.

After getting back to goalscoring ways against United, Salah was Liverpool’s biggest attacking threat.

A shot wide late in the first half was a rare effort on goal and he always looked to make things happen with his dribbling out wide.

Perhaps we just expect too much sometimes – he was excellent by most players’ standards.

Jota was used in a left-sided role by Jurgen Klopp, but he failed to offer anything close to what Luis Diaz has been of late.

Liverpool’s attack looks more stunted when the Portuguese is in the team at the moment, which is a headache for Klopp, given his outstanding goalscoring record.

Until he brings more in an all-around respect, he doesn’t get into the Reds’ strongest XI.

Retained in his new central attacking role, Mane copied most of his teammates in not being at his best at Anfield.

He curled over from distance in Liverpool’s first meaningful attempt of the game. Showed typical endeavour, though.

HE SCORED AGAINST EVERTON AGAIN!

But seriously, crucial in the opener, getting into an area deep inside the box, then heads home the second. What a cameo! More goals this season than he’s had starts.

Got into a scrap with Richarlison.

This threatened to be a desperately frustrating afternoon for Klopp, with his team often getting drawn into Everton‘s theatrics.

The manager provided a second-half masterstoke by bringing on Diaz and Origi, though, turning the game on its head immediately and giving Everton something new to deal with.

Best manager in the world – the fact that Liverpool are competing with his Man City team is all down to Klopp.