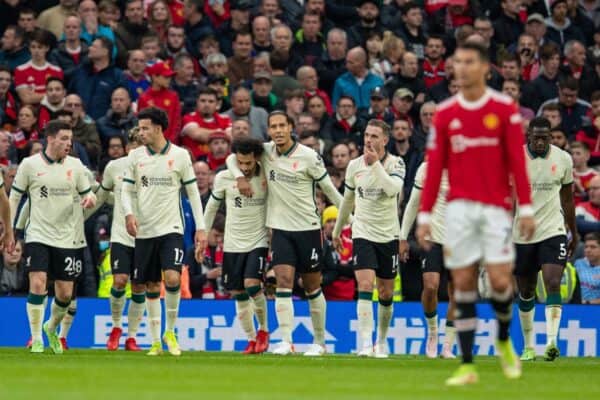 Man United can dent Liverpool’s quadruple dream at Anfield on Tuesday evening, so how confident are their beleaguered fans of a positive result?

The Reds reached the FA Cup final on Saturday after a 3-2 win over Man City, as this potentially legendary season continues.

Huge matches keep coming thick and fast for Liverpool, as United head for Anfield before Everton do the same on Sunday.

The Red Devils have experienced a season to forget after being tipped for a Premier League title challenge, but they still possess match-winning players on their day.

With kickoff fast approaching, we spoke to United fan and writer Alex Turk (@AlexCTurk) to get his honest thoughts a season to forget at Old Trafford, Liverpool’s title hopes and more.

How do you assess Man United’s season so far?

It’s been a complete and utter disaster from start to finish and that’s excluding the inevitable glory of the club’s biggest rivals.

After one of the most exciting summer transfer windows since Sir Alex Ferguson’s 2013 retirement, United have failed to deliver… and more.

From Ole Gunnar Solskjaer’s early sacking to Old Trafford struggles, including embarrassment against Liverpool and Man City, to losing the club’s most exciting academy graduate in years – non-stop despair.

Results at the weekend went United’s way, but for me, the season is done. This squad’s pride was gone a long time ago.

What do you think the biggest problem at the club is?

It’s a term used often because it’s true – everything starts from the top.

The Glazers have been leeching off this club’s size and success since their takeover – it wouldn’t be allowed to happen in the modern-day – and Ferguson was the key to keeping the ship afloat.

This season feels like an explosion of a decade of shocking recruitment under Ed Woodward’s leadership.

Ralf Rangnick inherited a disproportionate squad of players from five different eras at the club – four of them unsuccessful – so it’s no surprise little has changed under his watch considering this squad has no idea what next season holds, or they didn’t until last week.

So I suppose I’ve just answered the question. The out-of-touch owners, the unfit figures they’ve trusted to run the club whilst they’ve hardly entered England for 17 years and the players who aren’t performing anywhere near what their wage slip implies.

Who have been United’s three worst players this season?

This question will be the hardest of the lot because I can honestly say more than 50 percent of this squad has underperformed this season, and very few, if any, have consistently done themselves proud.

But if I’m having to narrow it down to three, I’d present three who would’ve previously been expected to be prime-time players for the club this term and beyond.

The first, and probably most high-profile, Harry Maguire.

He’s had a target on his back ever since the club paid £80million for his services in 2019, even when he was genuinely one of the league’s best centre-backs for the best part of his first two years.

This season, he looks like a shadow of his former self and while the over-the-top attempts to make him a parody by rivals do make him seem worse than he has been, his form hasn’t been good and I’d like to see someone else take the armband in 2022/23 to lower the pressure on him.

Another big-money signing, Aaron Wan-Bissaka, looks uncoachable and has lost his status as first-choice right-back to Diogo Dalot under Rangnick.

Not only is he showing minimal signs of improvement going forward, he no longer fills you with confidence in his biggest strength – one-on-one duels – anymore.

The third, and most worryingly, is Marcus Rashford. He, along with Bruno Fernandes, carried United for large parts of Solskjaer’s reign and was producing world-class numbers for a prolonged period.

But post-shoulder surgery, it’s as if a not-so-professional footballer has taken control of his body.

He’s no longer a certain starter and whenever he enters off the bench, he makes little to no impact and has seemingly lost the confidence to beat his man.

There are genuine worries he will never hit the same heights again and I significantly hope a new manager can reignite the blatant quality he possesses.

Which individuals have impressed, if any?

Believe it or not, there have been a few bright sparks of this, as I’ve regularly phrased it in recent months, demon-spawn of a season.

David de Gea is back to his best, long-standing sweeper frailties aside, Anthony Elanga has settled into first-team football brilliantly and has a big future ahead of him, Cristiano Ronaldo has been, well, Cristiano Ronaldo in possibly the worst United team he’s ever had to play in.

But the overwhelming star of United’s campaign has been, brace yourself… Fred!

Another player previously made a scapegoat because of the price Woodward splashed on him, Fred has finally settled in English football and provides such a crucial energy and box-to-box ability to the midfield.

Jadon Sancho is also coming into his own and looks like, unlike others, he will eventually be worth his hefty price tag, but Fred is one player I’m certain has a future under the new manager.

I can’t say that about many. He missed the Norwich win through injury, though, so I’m praying he’s back in time for Anfield.

What is your favourite and worst memory of Liverpool-United clashes down the years?

Somewhat bizarrely, most of my favourite United v Liverpool moments have happened at Anfield!

In recent memory, the standout would be when Juan Mata ran riot and United won 2-1 at ‘Juanfield’ in 2015.

His double, especially that sensational scissor kick, and Steven Gerrard’s hilarious 38-second sending off in his final appearance in the fixture rounded off a well-deserved win.

The worst? Isn’t it obvious? Having to stand 13 rows from the front as the Stretford End emptied around me whilst Liverpool, who weren’t even particularly special on the day by the way, toyed with a team on its last legs.

I’ve never left Old Trafford feeling so confused/angry/sad – that was the day even the most loyal of fans turned on Solskjaer in the dugout.

Liverpool were gift-wrapped the chance to cruise to a rare win at Old Trafford and they took it with devastating aplomb. Moving on…

Looking ahead to Tuesday, how highly do you rate this Reds side among the best in your lifetime?

I was born in 1999 and this isn’t just the best Liverpool team in my memory, it’s the best in my lifetime.

Jurgen Klopp has transformed a club in the situation United currently find themselves in into a relentless winning machine.

If Man City weren’t also boasting the best side in their entire history, Klopp would have more than one league title to show for it.

You simply expect them to win every game because there are game-winners in every single position and that’s a credit to Klopp and the style of play he has instilled at Anfield.

Even with City’s domestic dominance over the past decade, Liverpool have proven the value of smart recruitment and it would be a surprise if they weren’t crowned the Kings of Europe for a second time in three years next month.

I would be lying if I said I’m confident it will be much of a ‘battle’ at all. It should be a routine night for Liverpool.

United don’t have the personnel in defence to ward off 90 minutes of attacks from any team – Fred and Scott McTominay could be out and if Nemanja Matic doesn’t start it could get really messy – and the confidence going forward to put away chances, if they come.

I think the most interesting duel to watch out for is United’s use of pace going forward to catch out Liverpool’s high line.

Elanga is absolutely rapid and it wouldn’t be surprising if he was used as the runner in a front two with Ronaldo as the visitors look to play on the counter.

But as with every Liverpool match, the flanks are where the action will likely happen and Trent Alexander-Arnold and Andy Robertson could have an absolute field day against two below-par full-backs in Diogo Dalot and Alex Telles.

If I haven’t made myself clear enough already, I’m not very confident of a United win, or draw for that matter.

It could genuinely be as bad as the return fixture and the TV schedule hasn’t helped by turning it into a night game where Anfield is guaranteed to be 10 times more up for it than it usually is for day games (sorry).

I will be watching with a pint in hand and my fingers, toes and everything else crossed in hope that this isn’t another rout.

My heart is saying we catch the Reds on an off-day and snatch a point in a 1-1 draw, but I have seen nothing in recent months that would make me going against my head here.

So I will go for Liverpool 3-0 United – the Reds’ title charge continues, United’s top-four hopes take another sickening hit.