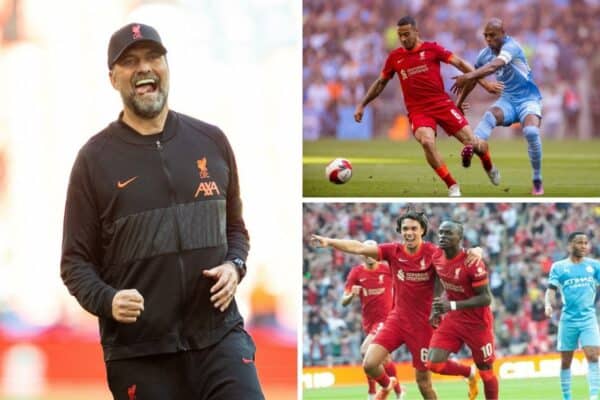 The good, the bad & how many changes for United? – Last word on Liverpool 3-2 Man City

Klopp’s men comfortably outplayed their rivals on Saturday afternoon, racing into an unfathomable 3-0 lead at half-time thanks to Ibrahima Konate and Sadio Mane.

While goals from Jack Grealish and Bernardo Silva made Liverpool sweat in the dying minutes, a comeback never quite felt on.

It means the Reds will now face either Chelsea or Crystal Palace in next month’s final at Wembley, as they look for yet more silverware.

Here, This Is Anfield’s Henry Jackson (@HenryJackson87) is joined by John O’Sullivan (@NotoriousJOS) and Chris Williams (@Chris78Williams) to discuss a fantastic win and much more.

JOHN: Well, first and foremost, it’s an FA Cup final. Competing in the showpiece English cup final is great, even if few would have ranked it among the priority pieces of silverware at the beginning of the year.

This is a squad in the middle of its peak and it would be great for them to collect more medals so they engrave their names even deeper into the Reds’ history.

Aside from the win, the performance was largely superb. It reaffirms that Liverpool can play their game and beat the best team in Europe that isn’t them.

True, Man City rotated, but they still had a plethora of quality players. Equipped with that knowledge, the Reds can take huge encouragement for the rest of the season and going into next, because their tussle with City for the top places in Europe and England isn’t going to end any time soon.

CHRIS: That first half was one of the best I can remember in the last couple of seasons.

It harked back to the Champions League run in 2017/18 where Liverpool blew teams away with an incredible high press and took every chance in front of goal that presented itself.

Naby Keita was superb, as was Thiago, and Fabinho put in a solid response to a rather poor performance last weekend against City in the Premier League.

For a player who ‘can’t defend’ Trent Alexander-Arnold was magnificent, and the much-maligned Sadio Mane showed he’s still got it with a world-class finish to make it 3-0.

The travelling Reds were also unbelievable and made the occasion seem like a home game – passionate and loud throughout.

JOHN: As Chris has said, the midfield was sublime. All three of Keita, Fabinho and Thiago were superb, which is all the more impressive because they haven’t had the reps together to develop synergy.

They were energetic, press resistant – Fabinho was much better in this department than in the league game – and used the ball superbly.

It’s unfair that Keita always has the pressure on him to justify his selection in big games, almost like he was on trial, but if you were previously doubtful of him, he alloyed all fears today in one of his best outings in Red.

Mane was excellent. He showed tremendous drive to block down Steffen for his first goal and he took his second brilliantly. He’s lost a yard of pace, but his movement, hold-up play, and finishing was that of a season number nine, which is brilliant considering he’s only played the role in recent months.

Having Luis Diaz on the wings provides the pace, so the team isn’t lacking in that department. Could be more 4D chess from Liverpool.

Ibou Konate was the better of the centre-backs and took his goal so well. He very rarely scored prior to moving to Liverpool, but he’s scored three games in a row now and looked more assured next to Virgil van Dijk than he was in the Benfica game.

HENRY: I echo what the others have said here – that opening 45 minutes really was a joy to watch and the fact that Klopp has called it the best half in his time at the club speaks volumes.

As for individuals on the day, I thought Thiago was outrageously good, both on and off the ball. My only regret is that he’s not 26 and we don’t have many years of him ahead.

Diaz was also unbelievable at times – he looks like a cross between peak Mane and Luis Suarez – with some of his footwork breathtaking.

It would be remiss not to mention Mane, too, especially as I have given him stick at times this season, perhaps unfairly. This was him at his very best and he looks to be growing into that central role all the time.

Konate and Keita also deserve a mention, with the pair hugely influential – oh, and Liverpool being in the FA Cup final is pretty positive, too!

JOHN: Letting City back in was disappointing and Liverpool got disjointed when the midfield changed. They’re a quality team and you can’t let them breed but they did.

Also, and this is very nitpicky, Liverpool ought to have won by more. They carved out good openings that they should have done more with.

CHRIS: Liverpool were cruising at half-time, but a slow start allowed City an early second-half goal, then the last few minutes were nervy all because of some sloppy play.

In the end it didn’t matter, but it was of their own making – you can’t give teams like City a sniff, especially when it’s your mistakes that give the opposition a chance.

Mo Salah looks every inch a tired player who could probably do with a long rest. Since being asked to carry Egypt at AFCON he looks burnt out, and at Wembley looked average.

He was easily dealt with by Nathan Ake and nowhere near the levels he was at before he went to Cameroon.

Jordan Henderson had a shocker when he came on. There was an immediate Keita-shaped hole in midfield and his legs looked heavy and his decision-making was way off.

HENRY: It doesn’t feel like a day to focus much on negatives, does it?

I do agree with Chris about Salah and Henderson, though, with the former just not himself at the moment and the latter horribly out of nick, both technically and physically.

I have been one of the skipper’s biggest admirers down the years, but there is simply no denying that Fabinho, Thiago and Keita are the first-choice midfield three at the moment.

Alisson‘s distribution wasn’t great – he made amends with some big saves, of course – and he doesn’t fill me with confidence in that area at times. This is all being a little harsh, though.

The disgraceful City fans booing during the minute’s silence was the biggest negative on the day. What an appalling bunch of lads.

And how many changes for United?

JOHN: I see no reason to make wholesale changes for Man United, obviously without knowing which players may be in the red zones.

The midfield functioned well and Konate did very well at the heart of the defence. There may be changes, based on sports science, but they wouldn’t be made on footballing merit after that showing.

Put Mane right and Diaz left with Jota central, and give Mo a break. He needs one.

HENRY: While there is a lingering feeling that Salah needs a rest, I would keep him in the team for the United game.

You feel that a goal is coming – it has to eventually! – and it would be just like Mo to pop up with a big moment against Liverpool’s biggest rivals.

While I fully expect Henderson to come back in, as Klopp rotates his midfield, I would keep it exactly the same, allowing Fabinho, Thiago and Keita to get more rhythm together.

Frankly, I wouldn’t be against an unchanged team, but I could see Jota coming in for Diaz or Mane, Joel Matip returning in place of Konate and, as mentioned, Henderson returning.