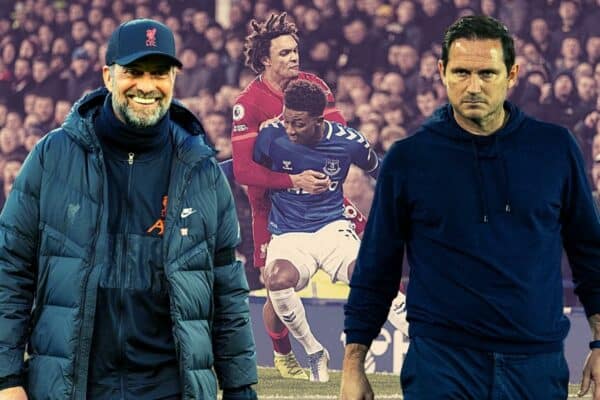 As Liverpool and Everton prepare to meet in a huge Merseyside derby this weekend, we get the concerned view from Goodison Park.

The Reds tore Man United to shreds on Tuesday evening, winning 4-0 at Anfield and maintaining their Premier League title hopes.

Next up is the visit of Liverpool’s other biggest rivals, as they make the trip across Stanley Park on Sunday afternoon.

Everything points towards a win for the hosts, with Frank Lampard’s side scrapping for their lives, but Jurgen Klopp won’t be counting his chickens.

Ahead of the game, we spoke to the always honest Matt Jones (@MattJFootball) from The Blue Room podcast to get this thoughts on all things Everton, Liverpool and more.

How do you assess Everton’s season so far?

It’s been the culmination of years of incompetence.

A lack of direction and character on the field, insipid boardroom personnel and a set of players who – barring a few exceptions – don’t really care all that much.

What do you think the biggest problem at the club is?

It all ultimately comes back to the ownership.

There have been some appalling managers and awful players at Everton in the last few years, but Farhad Moshiri and Bill Kenwright have been involved in bringing those figures in – the former actually thought bringing Rafa Benitez in was a good idea.

Aside from what is going on at Bramley Moore, every facet of the football club has disintegrated since Moshiri came in.

And to think there was such excitement when he rocked up.

Gut feeling: will you avoid relegation?

At the time of writing (before Burnley beat Southampton on Thursday) just.

And while that would be vital in terms of the club avoiding financial oblivion, the concern is that if they do stay up then the club won’t get the jolt it needs to make the drastic changes that are required.

Who have been Everton’s three worst players this season?

I think it would be harsh to single out any three from a negative standpoint.

The overwhelming majority have been atrocious.

Which individuals have impressed, if any?

Jordan Pickford has been solid and has looked a much more assured proposition since Everton‘s win at Anfield last season.

The stick and attacking firepower he is going to face on Sunday will obviously test that.

Anthony Gordon has established himself in the team as of late, which has been nice. He’s a really talented boy who hasn’t shirked the battle.

A shout to Vitaliy Mykolenko, too. Obviously, the Ukrainian has had a lot on his mind other than football, but he’s shown promise against United and Leicester.

Looking ahead to Sunday, how highly do you rate this Liverpool side?

They are the best Liverpool side I’ve seen. By a long, long way.

Pickford obviously needs to play out of his skin – as will Yerry Mina, who made a welcome return on Wednesday.

But ‘battle’ implies there will be some kind of even contest, and sadly, I don’t think that will happen.

If Everton get a draw it would be extraordinary.

But this is the best home side in the Premier League playing the worst away side in the league, so a comfortable win for Liverpool is obviously on the cards.

It’s a result I would be able to live with if Burnley lose to Wolves earlier in the day, though – that match is arguably a bigger game for Everton than the derby itself.