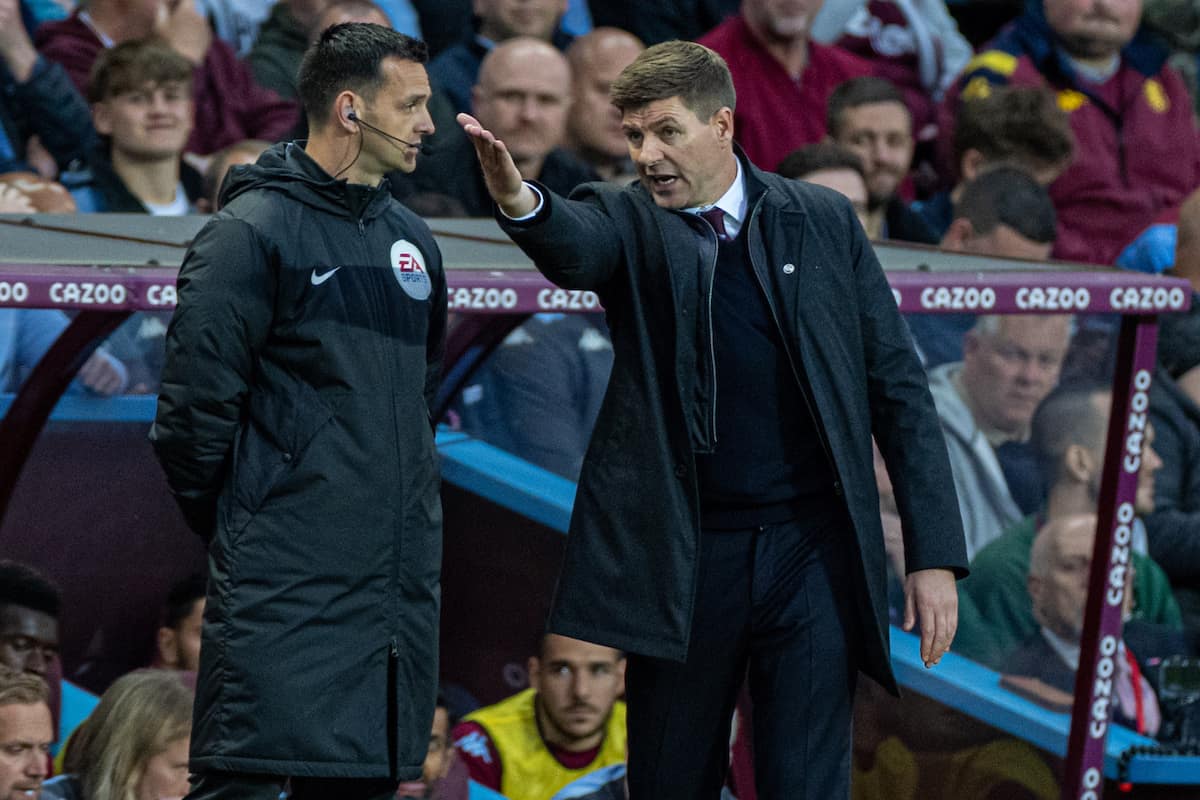 Steven Gerrard was rightly critical of referee Jon Moss’ performance in Aston Villa‘s 2-1 loss to Liverpool, with both sets of supporters in agreement.

Villa shocked Liverpool early on Tuesday night, with Douglas Luiz firing in after just three minutes, only to be pegged back by Joel Matip‘s goal soon after.

Sadio Mane then headed home the winner in the second half, in a game frequently broken up by minor fouls – 10 of which were awarded to Liverpool and 12 to Villa.

Moss was referee for the night, and was central to a number of confusing decisions, including a moment where he initially looked to call a foul for Villa before allowing play to go on and then eventually pulling it back.

Liverpool could feel most aggrieved, given a clear offside was not flagged in the buildup to Luiz’s opener, but after the game it was Gerrard who questioned Moss’ display.

“You just asked me a question so you obviously think it, don’t you? I’ve answered your question, I just hope Jon’s performance is looked at.

“I don’t want to get into trouble, I don’t want to be sour. We’ve lost the game, Liverpool have scored two goals against us, we need to look at that.

“I don’t want to try and cover over any cracks, but you asked me a question and I said I hope the referee’s performance is looked at.”

When informed that Moss had decided to retire at the end of the season, Gerrard replied: “Is he? Good.”

Normally, when one manager is critical of a referee post-match it is a view not shared by the opposition – but that was not the case this time.

Jon Moss doesn't have a clue what he's doing, does he?

Jon Moss is a genuine disgrace. There will be more injuries in this match because he’s got precisely no control over it. Both sets of players & fans will feel aggrieved, not because he’s favouring one side or the other but because he is uniformly dreadful.

Can tell Jon Moss is retiring at the end of the season – he refereed that game like he was pissed.

We can all be biased towards our own team, but I thought Jon Moss was much kinder to Liverpool than Villa last night.

He made errors against us, too, but I'd have been seething about his performance if I was a Villa fan. He was shocking.

A number of journalists were also critical…

Jon Moss looking away from the action so he doesn't see Trent shove Coutinho might be my favourite bit of refereeing so far in this absolute shitshow at Villa Park.

Aston Villa 1 Liverpool 1 at HT. Referee Jon Moss is smiling as he goes off. The Villa fans are not smiling.

One of Jon Moss' last games as a referee – and not one of his best. #AVLLIV

Gerrard will almost certainly be rebuked for his comments, as Frank Lampard was following his criticism of Stuart Attwell following Everton‘s 2-0 loss at Anfield in April.

But there should be a measure of accountability for officials when their standards slip as they did on Tuesday night, with Moss appearing to struggle to keep up with the intensity of the game.

The 51-year-old is, of course, due to retire at the end of the season, so it is unlikely that the situation will affect his position between now and then.