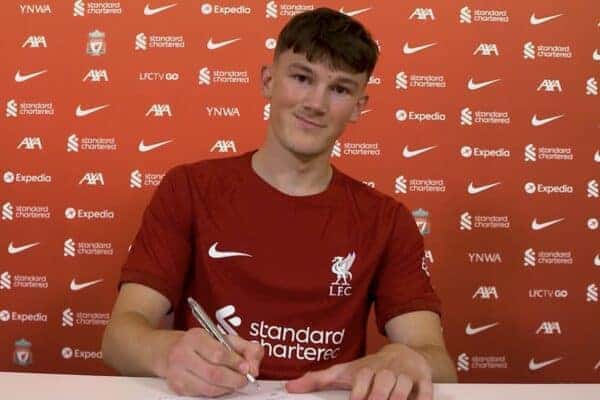 Liverpool have announced the signing of 18-year-old right-back Calvin Ramsay from Aberdeen on a long-term deal, with the deal worth up to £6.5 million.

Ramsay produced an outstanding season as Aberdeen finished ninth in the Scottish Premiership, with one goal and nine assists in 33 games in all competitions.

That attracted the interest of clubs including Leeds, Bologna and Sassuolo, but it is Liverpool who have won the race to sign the young Scot.

Liverpool have now confirmed the arrival of Ramsay on what is believed to be a five-year contract, with the club agreeing to a deal worth £6.5 million, inclusive of various add-ons.

Ramsay becomes the third first-team signing this summer, following Fabio Carvalho and Darwin Nunez, and is due to take up a senior role as backup to Trent Alexander-Arnold.

It will be a big step up for the youngster, but one he has proved he has the potential to make as he transitioned comfortably into the first-choice spot at Aberdeen.

He is now the Scottish side’s club-record sale, breaking the record previously set when Scott McKenna moved to Nottingham Forest for £3 million in 2020.

His arrival is likely to spell the end of Neco Williams‘ time at Liverpool, with the Wales international poised for a big-money exit after an impressive loan at Fulham.

Conor Bradley remains as a high-potential right-back prospect, however, and could still challenge Ramsay for a long-term role in the first team.

Ramsay should link up with the Reds for the first day of pre-season on July 4, following a post-season holiday in Dubai.