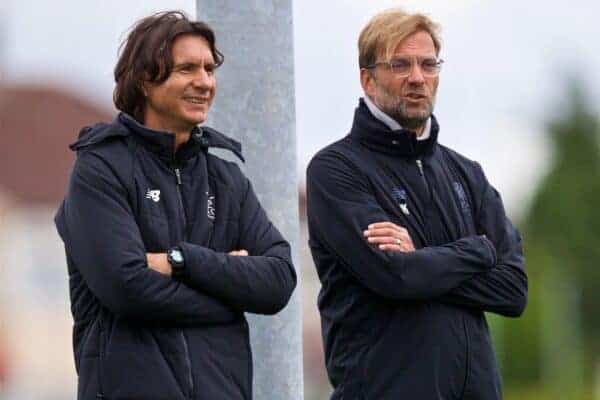 What happened to Zeljko Buvac? The ex-Liverpool assistant who mysteriously left

Jurgen Klopp had worked with his trusted assistant Zeljko Buvac for his entire coaching career, until the Bosnian unexpectedly quit Liverpool in 2018 – but where is he now?

He was famously nicknamed ‘The Brain’ by the Liverpool manager.

So when Buvac left the club with no real explanation two days before the Champions League semi-final against Roma four years ago, there was an understandable concern as to how this could affect Klopp and his team.

Fortunately for Liverpool, Buvac’s exit was followed up by great success on the pitch, with the Reds lifting Champions League, UEFA Super Cup, Club World Cup and Premier League trophies in the two years that were to come.

But why did Klopp’s former right-hand man really leave and where is he now?

Born in Prijedor, Bosnia and Herzegovina, Buvac had a 13-year career as a player, an attacking midfielder who started in the Yugoslav First League and moved across to Germany with Rot-Weiss Erfurt in 1991.

A year later he joined Mainz 05, where he’d first meet Klopp, before a spell with Neukirchen in 1998.

It was there that, after hanging up his boots, he was immediately given the opportunity to take charge of the club as manager.

He was there for three years, before first joining Klopp as assistant at Mainz in 2001.

The pair went on to achieve great success at the club, before moving on to Borussia Dortmund and Liverpool later in their careers.

Peter Krawietz, who is still alongside Klopp as Liverpool’s assistant manager, also worked closely with Buvac.

How long did he work with Klopp?

In total, the pair worked alongside each other for 17 years.

With Mainz, they achieved promotion to the Bundesliga in 2003/04, as well as European qualification several years later.

In 2008, Klopp and Buvac moved on to Dortmund, with the Bosnian helping the side on their way to two Bundesliga titles, one DFB-Pokal, two DFL-Supercups and a Champions League final in 2013.

When Liverpool came calling in 2015, Klopp ensured he was able to bring both Buvac and Krawietz with him.

Buvac spent nearly three years as Klopp’s assistant at Anfield, even filling in during the manager’s illness for the 2-2 draw with Sunderland in 2016, before an unexpected departure 48 hours before the clash with Roma in April 2018.

Why did he leave?

Liverpool initially cited ‘personal reasons’, with his absence confirmed for the remainder of that campaign, but it soon became clear that Buvac would not return.

In 2019, it was claimed that he took issue with the increasing role of Pepijn Lijnders on his return from NEC Nijmegen, with the Dutchman eventually appointed as assistant manager following Buvac’s exit.

One year later, in an interview with Russian journalist Nobel Arustamyan, Buvac revealed he did not congratulate Klopp after Liverpool’s historic league title win in 2020, which would suggest there was a breakdown in the relationship between the pair.

Klopp has never touched on the subject, but name-checked Buvac when discussing his coaching staff in an interview with BT Sport earlier this year.

“I worked together for a long time with Zeljko Buvac, who was a more experienced coach than I was when we started because he was older and worked already a little bit,” Klopp said.

“We worked very close for a long time together and then it didn’t work out anymore and we brought in Lijnders and Vitor [Matos] now. They are like energisers, they are the next generation.”

Why was he nicknamed ‘The Brain?’

Klopp famously nicknamed Buvac his “brains” and Krawietz his “eye” during their time together at Dortmund.

This was due to Buvac’s specialism in tactics and training, while Krawietz focuses on scouting and analytics.

Buvac in particular had a very close relationship with Klopp, which was why his sudden Liverpool departure came as such a surprise in 2018.

In 2013, former Liverpool midfielder Nuri Sahin – a key player under the pair at Dortmund – said Buvac “was basically Klopp’s twin.”

The pair saw the game through similar eyes, and there’s no doubt Buvac played a key part in Klopp’s success up until the split.

Where is he now?

After a break from the game lasting nearly two years, Buvac took up a new job as Dynamo Moscow’s sporting director in February 2020.

Buvac is responsible for their transfer strategy and is seemingly enjoying the role, after penning a new contract until 2024 at the end of last year.

You rarely hear anything from Buvac, but his admission in 2020 that “he was practically a manager for 17 years,” would suggest he is relieved to be away from the training pitch for the time being.

“I did the coaching job, with the exception of the interviews,” he said in his interview with Arustamyan.

“It felt like I’ve been the manager for all those 17 years. I had all the functions and tried to influence my team as much as I could to help them succeed, but I didn’t need that kind of attention.”

A not-so-subtle dig at Klopp, perhaps?