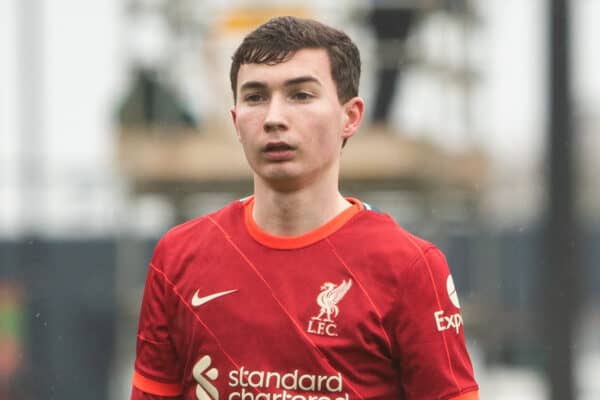 The Liverpool under-21s picked up their first win of pre-season in their third friendly of the summer, with four different goalscorers in a 5-4 victory.

It has been a testing start to pre-season for the young Reds, with two meetings with senior opposition resulting in a draw and a heavy defeat.

After a 1-1 draw with Welsh side Caernarfon Town, Barry Lewtas‘ side fell to a 6-0 loss away to Championship outfit Wigan, with two trialists featuring alongside veteran player-coach Jay Spearing.

Saturday brought the third friendly of their warmup schedule, this time at home to their academy counterparts at Leeds.

Lewtas continues to rely on the same core of players in these early weeks of pre-season, and Mateusz Musialowski was at the heart of a nine-goal fightback win at the AXA Training Centre.

Mateo Fernandez put Leeds ahead soon after kickoff, with parity then restored as Fidel O’Rourke and Oakley Cannonier combined and Musialowski finished the move off.

There was another for the visitors before the half-hour mark as Sean McGurk capped a blistering counter, with Cannonier then thwarted from the spot after having been brought down.

Musialowski, O’Rourke and Luca Stephenson all went close, but it was 18-year-old Harvey Blair who brought it back to 2-2.

McGurk put Leeds back in front before the break, but Musialowski was on hand for his second of the afternoon for 3-3, following a trademark solo run from the young Pole.

Liverpool were ahead for the first time when O’Rourke started and finished a bright move by heading in from Jack Bearne’s cross, but Fernandez grabbed his brace to level yet again in the 70th minute.

But then Layton Stewart sealed the win with his first goal of pre-season – and his second since returning from long-term injury – converting well after Bearne took it round the goalkeeper.

It was a dramatic 90 minutes as the U21s secured their first victory of pre-season, and it will no doubt inject confidence into Lewtas’ side after a rough start.

Next up is a trip to Aggborough to take on Kidderminster Harriers, with the National League side hosts on Friday.