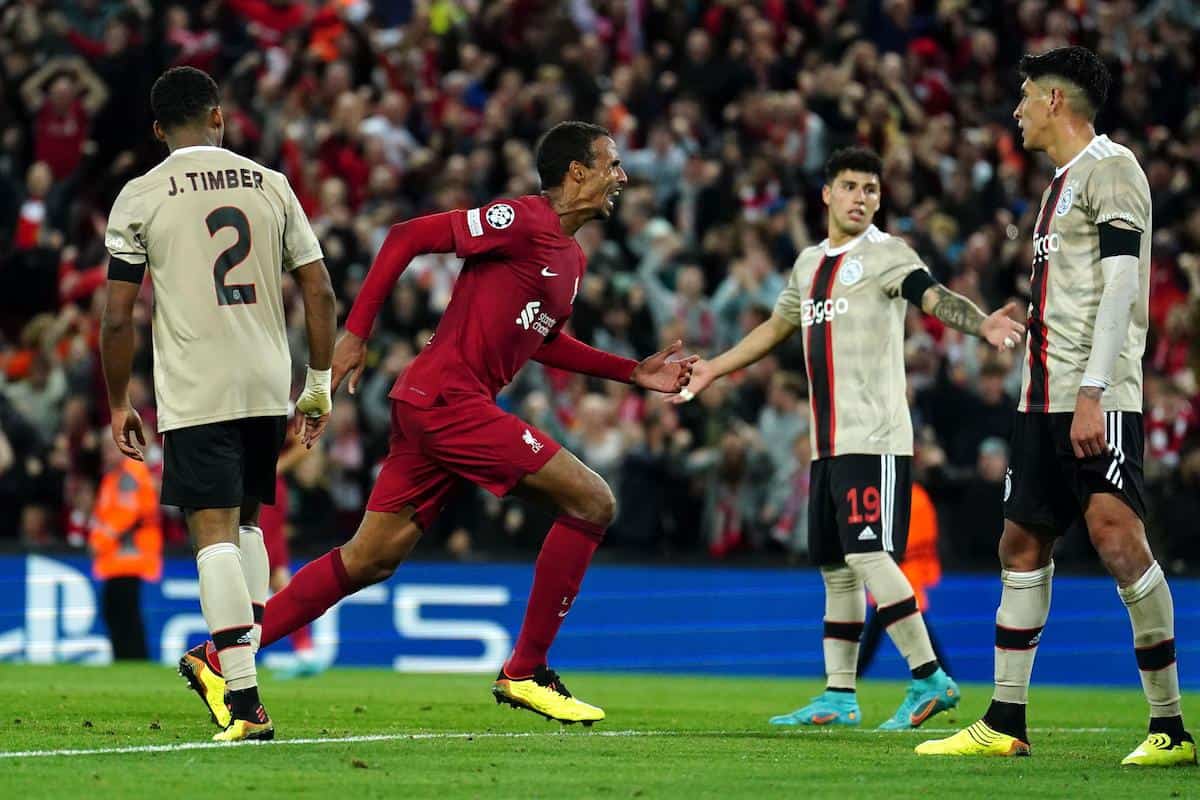 Liverpool got their Champions League campaign up and running after Joel Matip scored a crucial late winner against Ajax on Wednesday.

Matip was one of four players to come into the team following the defeat to Napoli last week, and was one of Liverpool’s standout performers throughout.

His goal came as he headed home from a corner late on, with replays showing his effort had crossed the line before Ajax could clear.

It goes down as a huge win for the Reds, who were in desperate need of a positive result after a humiliating night in Naples last week.

Thiago, too, was excellent, but it’s Matip who rightly gets the plaudits.

Yes! Finally one of those many chances from setpieces pays dividends.

I adore him. Big Joël Matip.

Ajax,
This is Joel Matip’s world and we’re just living in it x pic.twitter.com/FPAnO9SSGi

That’s a #LFC side I recognise.

Attitude spot on, shape far better, intensity in spades & grafted until they got the winner. Still plenty to work on but thought Tsimikas & Fabinho were outstanding, Diaz tireless & the CBs dominant.

A much needed win after a really difficult couple of weeks. Thiago & Matip both made a huge difference. Great to have Jota back too. Darwin is an interesting one, there are certainly glimpses of how dangerous he can be, but the team are still working out how & when to use him.

Massive win that. And absolutely deserved. Up the back in Champions League business Reds #LFC #UCL #LIVAJA

A thoroughly deserved winner. Liverpool miles better than they’ve been in some time. Pressing, creativity, intensity. As key as Thiago is, Jota was also instrumental. Matip superb and so key to the build up. Tsimikas phenomenal. Diaz never, ever stopped running. A big win.

Well that felt much better, a lot more fight and intensity. Matip, Tsimikas and Thiago all improved us massively.

Sometimes when you're in a rut you need to grind out a few results hopefully that's the catalyst now.

At last! 9 chances created between the two full backs and we finally make one of those headers at set pieces count.

A good way for Liverpool to go into a 17-day break with no game, then.

And fitting that Matip, who made a real impact on Liverpool’s overall performance tonight, was the man who got the winner.