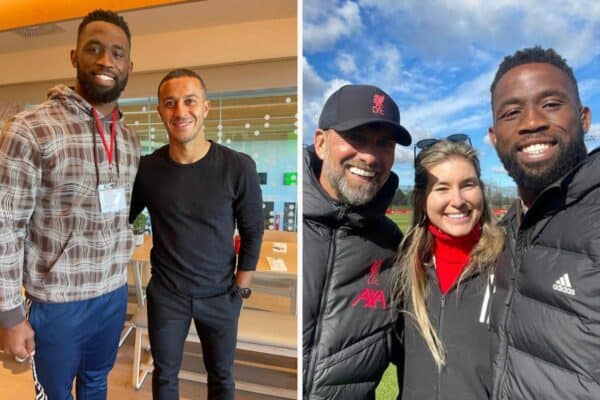 There was a special guest at Liverpool’s AXA Training Centre on Wednesday, with Rugby World Cup winner and South Africa captain Siya Kolisi in attendance.

A big Liverpool fan, Kolisi led the Springboks to World Cup glory in the final against England in November 2019.

Later that month, a chance meeting with Jurgen Klopp in Cape Town led to an invite to Liverpool’s Champions League clash with Napoli, the first time he’d had the opportunity to watch the Reds live at Anfield.

And Kolisi realised another dream earlier this week when, courtesy of AdidasZA, he met Klopp again and watched Liverpool’s players partake in Wednesday’s training session.

The South Africa rugby star posted some footage of Virgil van Dijk in action on Instagram, as well as pictures with Klopp and Thiago, who he calls a “magician.”

Kolisi was there with his wife Rachel, who described the day as a “dream come true” on her Instagram.

Back in 2019, having just won the World Cup, he explained his disbelief after bumping into Klopp.

“I was sitting there with Faf du Plessis, the South Africa cricket captain, and I almost fell off my chair when I saw him walk in because I couldn’t believe it,” he told Liverpoolfc.com at the time.

“He went to the bathroom and I was standing outside waiting for him to come out.

“I was too scared to ask him [for a chat], so I just gave him my phone as I knew someone who knew him. Then he came over and said, ‘Mate, you could have asked. I know who you are, we watched the final’. So that completely touched me.

Kolisi went on to explain how his admiration of Steven Gerrard as a youngster, particularly his leadership skills, “touched his heart.”

As a World Cup winner, let’s hope Kolisi had some inspiring words of advice for Liverpool’s players, as they embark on their busy pre-World Cup schedule!