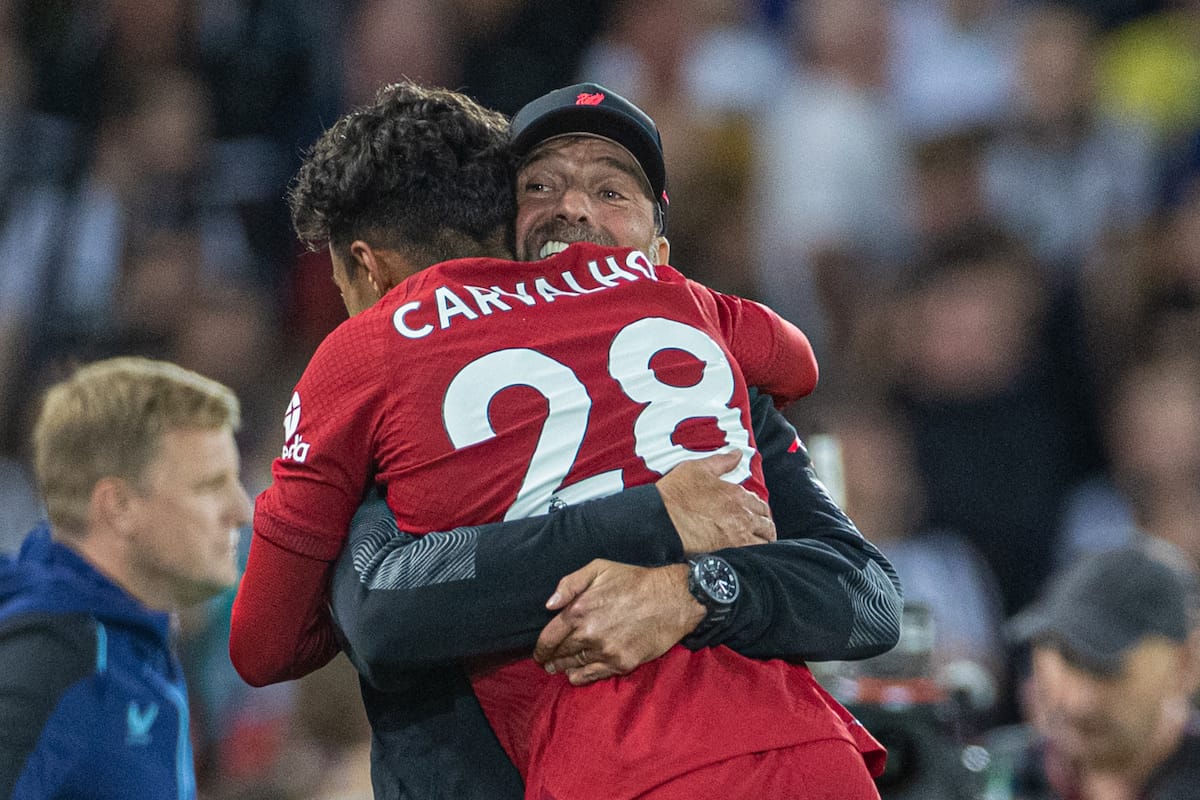 The good, the worrying & what’s your derby XI? – Last word on Liverpool 2-1 Newcastle

The Reds left it until the eighth minute of stoppage time to snatch a vital win over the Magpies at Anfield, with Fabio Carvalho‘s winner bringing back memories of Stan Collymore’s late strike in 1996.

It was three points that felt priceless, with Jurgen Klopp‘s men far from at their best but digging deep in the end.

Here, This Is Anfield’s Henry Jackson (@HenryJackson87) and Matt Ladson (@mattladson) are joined by Liam Togher (@liamtogher88) to discuss a thrilling night, some negatives and Saturday’s trip to Everton. 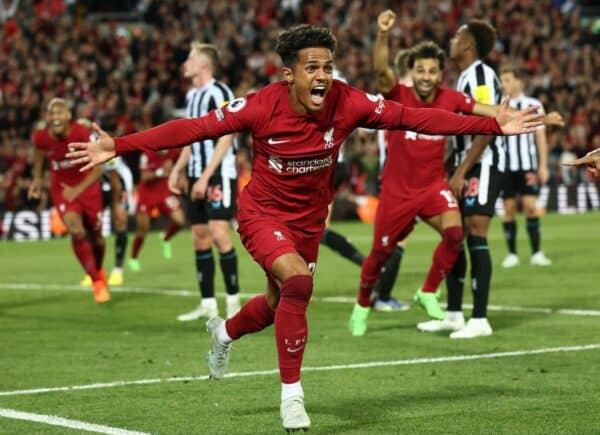 LIAM: The mentality monsters are back!

Many are already moaning about the added time to added time enabling Carvalho to turn one point into three, but Newcastle didn’t get away with their time-wasting, and in any case, Liverpool deserved the win on the balance of play.

On such moments a season can swing; one hopes it might be the catalyst to properly kickstart our spluttering campaign so far.

Carvalho added a spark when he came on and the other ex-Fulham youngster was our best player on the night.

At 19, Elliott is already bossing our midfield and taking initiative when far more experienced pros are contributing little.

Gomez took charge of a shaky defence, while Tsimikas was ever-lively after he was introduced to the fray.

HENRY: My word – wins like that are the best, aren’t they!

Let’s be honest, the performance wasn’t pretty for much of proceedings but Liverpool showed their mentality to record the latest of Anfield wins. For that, they deserve credit. 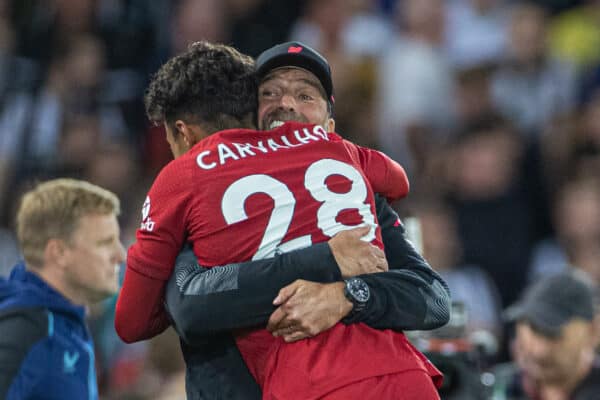 As Liam says, Elliott and Carvalho were the clear stars of the show, with the former an outstanding prospect who grabbed the game by the scruff of the neck. He has an enviable amount of natural talent but he’s also so tenacious and full of heart.

As for Carvalho, what a moment just a day after celebrating his 20th birthday. I can’t remember what I did the day after mine, but it was certainly something far less productive!

I thought Gomez and Luis Diaz could also hold their heads high, while Salah got two assists and created six chances, on what was still an off-night for him. That’s how incredible he is.

All in all, it was a ‘result far more important than the performance’ kind of night, and Liverpool delivered… just.

Let’s not ignore the celebrations on the touchline, too – whether it was Darwin Nunez giving it to the Newcastle dugout, an out-of-control Joel Matip pounding the floor or Klopp and Robbo embracing, they had the lot!

MATT: Sitting there at 1-1, the thought of three draws from five games to start the season was pretty depressing. But the manner of victory could really give the season the proper kickstart it now needed.

I’d argue that it’s a bigger confidence booster than putting nine past a sorry Bournemouth. You can’t match the adrenaline of that last-second winner.

We should give credit to Klopp for the subs, as the two full backs were awful. But then it absolutely bothers me why he’s refusing to ever rotate them when they look absolutely knackered after less than a month of the season. 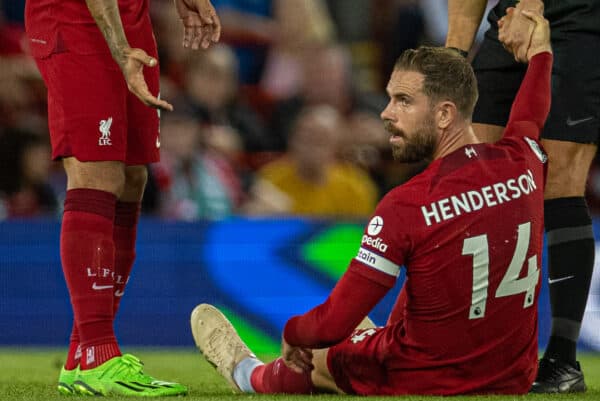 LIAM: Why do we always have to go behind in a match to rouse us from our slumber?

A raucous Anfield got us over the line; the shoe will be on the other foot on Saturday if that game follows a similar pattern to more or less every match we’ve played since May.

At 1-0 down, I was looking on with envy while Man City were making it four, then five, then six against Forest.

The result shouldn’t gloss over some alarming performances, either.

Vn Dijk has looked uncharacteristically iffy ever since the start of the campaign – ditto Salah and Robertson.

Oh, and the recurrence of the I-word, this time afflicting our skipper.

Hendo might not be having fans salivating over his performance, but we’re simply missing too many players right now to cope with our captain searching for a spot in our already over-capacity treatment room.

HENRY: I completely agree with what Liam has said, in terms of team and individual shortcomings that aren’t going away.

This ability to score first is a real problem and it is happening because Liverpool are starting matches so slowly, not because opponents are just scoring against the run of play. 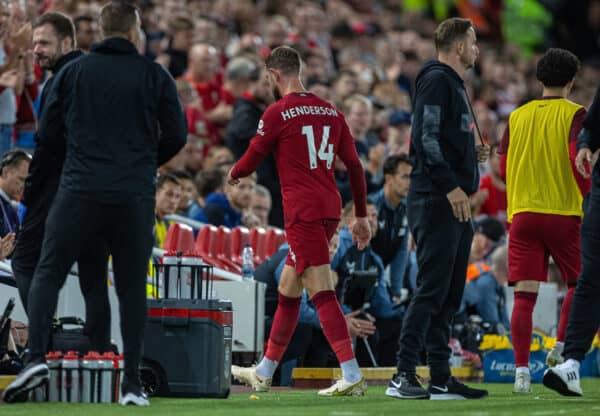 The three who drove me mad last night were Trent, Van Dijk and Henderson, all of whom are among my favourite Reds players of all time for different reasons.

Trent’s defending is leaving so much to be desired – we can’t just ignore that because of the annoying narrative – and Van Dijk was so slow on the ball, playing with the kind of lethargy he has all season.

Then there’s Hendo, who is now not only injured, but played with such caution on the ball and looks like a player performing with little confidence. Maybe the layoff will do him some good.

As Liam says, if Liverpool don’t play with far more quality and intensity from the off at Everton, there is every chance that it will be Man United away all over again.

MATT: What’s worrying is that those who poor against Newcastle, have been poor for pretty much all five games this season. A one-off bad night can be forgiven, but they all look well below their best.

To me, they look fatigued, already, and we’re not even a month into the season. The bigger concern is that the four/five years of playing such an intense style is coming to the fore – just as it did with Klopp’s previous clubs.

The body language (again) wasn’t right. Van Dijk and Fabinho often looking frustrated at themselves and/or teammates for not being where they wanted them to be. Alisson had a moment when he suggested Robertson hadn’t ran forward quick enough. These are worrying signs.

Two summers ago, Klopp spoke of Trent and Robertson not being able to play 50-plus games per season as it would “limit their careers”. Since then, they’ve played even more. Why not start Kostas last night? Would it have been such a downgrade? And keep Robertson ‘fresh’ for the derby.

I really don’t understand the reluctance to rotate and then complain about players being overplayed.

And what’s your derby XI? 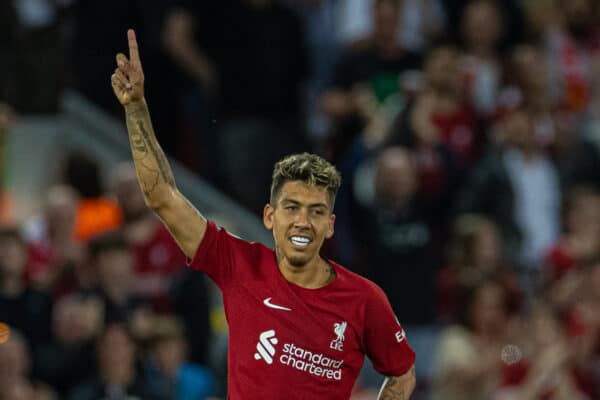 LIAM: Assuming that Henderson won’t recover for Saturday, that could give Carvalho the chance to strut his stuff from the start, even if Goodison Park isn’t the most ideal setting for him to be thrown in for a first top-flight start.

I’d also give Tsimikas the nod over Robbo at left-back – the Scot could perhaps do with a slight recharging of the batteries to get him going once more – while my inclination would be to begin with Darwin Nunez on the bench.

At least we’d have a scoring option to call upon if needed, while I’d be nervous about starting him as Everton will inevitably try to get under his skin in the same way that Joachim Anderson did so fatefully.

I would go with Robbo despite him not being at his most energetic and in-form – these are the games he thrives in more than any, as last season showed. 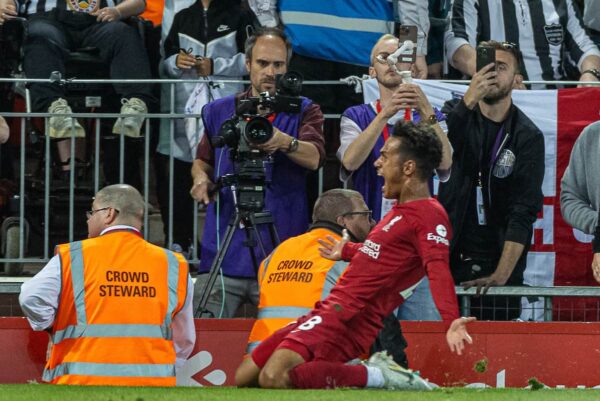 I’d rest him against Napoli, though, without question.

While I admire the boldness of going with the youth of both Elliott and Carvalho, that is a huge risk in what will be a physical contest against an Everton team who are horribly snide.

With Hendo surely out, I would simply bring Milner in for him, not that that’s ideal these days.

Nunez off the bench makes sense, as well as potentially Diogo Jota, not only allowing Firmino to deservedly start again but also alleviating the risk of Darwin headbutting an Everton player in the first minute!

MATT: I think there’s a chance Matip comes in, Jurgen likes him in the derby. So if he’s deemed to be match fit, I’d expect him to come in.

Milner for Henderson looks a cert… while I’d keep the front three the same and expect Jurgen will too, especially with Firmino in form. Nunez at least offers an option from the bench then.