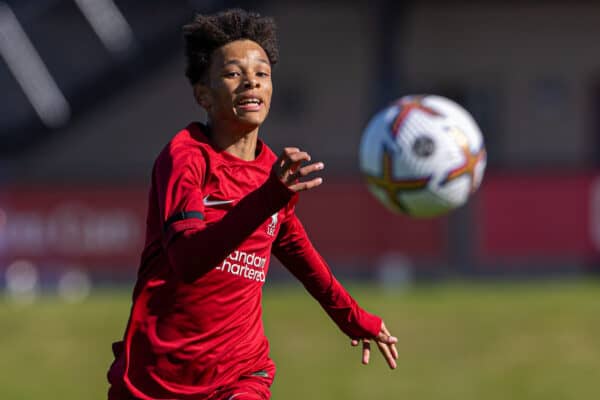 It was a chastening afternoon for the Liverpool under-18s as they visited Charlton in the PL Cup, with Ben Doak missing a 8-1 defeat.

After making it three wins from three in the UEFA Youth League on Tuesday, the young Reds visited Charlton in a cup clash that saw Marc Bridge-Wilkinson field a rotated side.

Doak, who scored in the 4-1 victory over Rangers in midweek, was a notable absentee, with the Scot called up to the under-21s and replaced by Jayden Danns.

Unfortunately for Liverpool, it was a nightmare trip to the capital, with five goals conceded before half-time as Kai Enslin, Henry Rylah and Patrick Casey all found the back of the net before a Ralfi Hand brace.

Bridge-Wilkinson was stirred into action at the break, with Ranel Young and Iwan Roberts sent on for Danns and Trent Kone-Doherty, and his side grabbed one back within a minute of the restart.

It came through midfielder James McConnell, who netted his second of the season to bring it back to 5-1 and raise hopes of an unlucky comeback.

They were short-lived, with Ryan Huke restoring Charlton’s five-goal lead before Rylah grabbed another with 13 minutes left on the clock.

Liverpool had the opportunity to reduce the deficit in the closing stages, but with McConnell unable to convert a penalty, the hosts then went up the other end to score again through Jadon Yamoah.

It brought the heaviest defeat for the U18s since a 7-0 loss to Man City in 2016 – a game that saw Jadon Sancho and Phil Foden start and the latter score twice – and served as the second consecutive loss in this season’s Premier League Cup.

There was further frustration, too, as young midfielder Cody Pennington was brought on and then forced off again within 14 minutes in the second half.