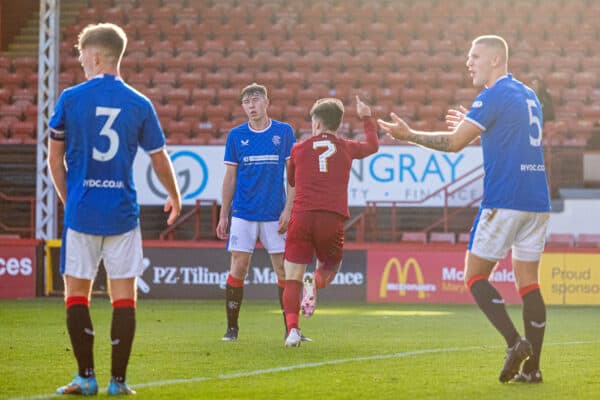 Ben Doak produced another mesmeric performance as Liverpool U19s fought back to clinch a 4-3 win over Rangers and progress in the UEFA Youth League.

With three consecutive wins already under their belt, the young Reds headed to Partick Thistle’s home stadium for their second meeting with Rangers – with victory guaranteeing at least a place in the last-16 playoffs.

Barry Lewtas named another strong, experienced side with the likes of Bobby Clark, Luke Chambers, Jarell Quansah and Melkamu Frauendorf all starting in Glasgow.

The duo of Doak and Oakley Cannonier combined for the opener within eight minutes, with the skill of the Scottish younger laying on a chance for the striker, who showed his composure to convert under pressure.

Rangers were level two minutes later, with Harvey Davies handing the home side a penalty which Charlie Lindsay netted, but Liverpool regained the lead through a brilliant Frauendorf finish.

They extended that to two goals with another for Cannonier before half-time, the striker racing onto a stunning pass from Doak to round the ‘keeper and, at the third time of asking, prod home for 3-1.

With one foot in the next stage, Liverpool were dealt a setback soon after the restart when, with Rangers striker Robbie Ure racing through, Lee Jonas was sent off for a pullback as last man.

Lewtas shifted to a three-man defence with Quansah, Chambers and Terence Miles supported by Clark and Dominic Corness in wider roles, as the young Reds sought for stability.

The tactical switch did not pay off, with the shift from a back four – ignoring substitute Charlie Hayes-Green – leading to some sloppy defending.

Rangers grabbed one back just after the hour, with a one-two evading Miles as Arron Lyall broke through and, after an attempted challenge from Davies, the winger was able to tap home.

A similar situation then handed Rangers their equaliser, Zak Lovelace causing more problems for Davies, and with the ball ricocheting off the post, Ure was there to hammer it in.

Liverpool have a special talent in Ben Doak! ?

The Scot, all too familiar with football in Glasgow, twists and turns before firing into the corner.#UYL pic.twitter.com/sxsGHx6Vy1

But a genuinely stunning goal from Doak was able to clinch it for Liverpool, the 16-year-old former Celtic player twisting from the corner flag and into the box before whipping a finish past Jacob Pazikas to edge closer to the next stage.

Victory over Ajax in a fortnight will book a place in the last 16 with a game to spare.