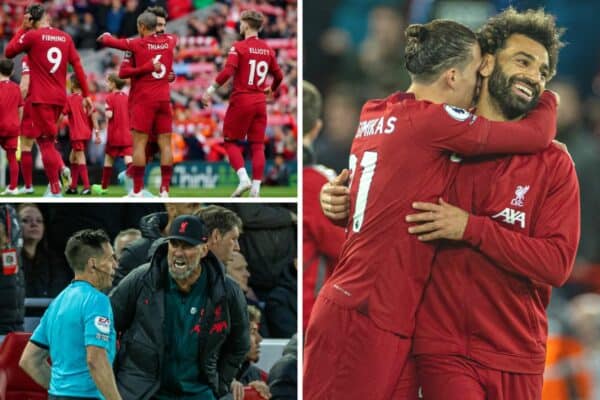 Anfield was at its very best as Liverpool produced a brilliant display to see off Premier League champions Man City on Sunday.

There was only one goal, but this game had it all.

Mohamed Salah‘s terrific winner secured a massive victory for the Reds, but this result was about more than just the three points.

Is this the day we’ll look back on as the moment Liverpool finally got their season going once and for all?

Here, This Is Anfield’s Jack Sear (@JackSear) is joined by Adam Beattie (@beatts94) and Ben Webb (@BenWebbLFC) to discuss an incredible performance, an electric Anfield atmosphere and some very questionable refereeing!

We couldn’t have asked for a better performance, could we?

ADAM: Absolutely magic, a real show of defiance when we needed it. City were excellent as they always are but we were good value for the three points.

We were great in the big moments which has been missing at times this season.

In terms of standout performances, Joe Gomez was superb. We restricted Erling Haaland to one proper chance and he was a huge part of that, especially impressive given that he’s been in and out of the side for a couple of years, and it’s a big, emotional occasion to be dropped in to.

BEN: Yep, I thought the performance encapsulated everything which has been in question this season and identifiable with Klopp’s ethos. The desire, confidence, aggression and togetherness to scrap for every inch of the pitch and second ball was there in abundance.

Salah, my word, that first-touch and turn, the composure and ability, the finish, the celebrations – a moment of pure euphoria. Harvey Elliott also deserves a mention for performing with such freedom and creativity in a game of such magnitude.

JACK: I was really pleased to see Klopp start Salah through the middle after Ibrox.

Get him involved in the game and get him close to the goal and he’ll take care of the rest. What a player.

How good was that Anfield atmosphere?

ADAM: For me that’s the best Anfield has been since the pandemic. You can sense within the first five minutes if everyone is up for it and the second half in particular was rocking.

It was a stroke of genius from George Sephton to play You’ll Never Walk Alone after the final whistle. That game was about so much more than the three points and it was a great opportunity for the supporters to show that they were still right with the players despite the tricky start to the season.

Hopefully the players and supporters can bottle what we had on Sunday and take it into West Ham. We’ve had a few false dawns this season but there’s no reason why this can’t be the catalyst for a bit of a run now.

JACK: And Pep did us a big favour riling up the crowd, didn’t he?! The same mistake Mikel Arteta made last season…

ADAM: Guardiola has always been a bit preoccupied with our atmosphere and his touchline antics on this occasion were quite frankly hilarious.

I’ve got no idea what he was trying to achieve but showing a bit of needle like that always lifts us, and the players responded accordingly.

We know how much of an impact Anfield can have on occasions like that, but arguably more importantly, so do they.

The less said about that refereeing performance the better…

The fact that Antony Taylor and the linesman didn’t consider Bernardo Silva paragliding from Salah’s shirt and nearly replicating the Ramos incident a foul is utterly mind-boggling. Not surprised Jurgen was so infuriated.

JACK: Yeah, I just can’t get my head round how that Bernardo foul wasn’t given. As the boss said “how on earth is it possible?!”

ADAM: It would be really nice if at some point we played Man City without a Mancunian referee!

The Haaland foul in the build-up to the goal looked stonewall from where I was sat but I had zero faith that it would get overturned because of the way everything had gone.

He just didn’t have a grip on the game at all. In the same way that Pep whipped up the crowd though, so did the refereeing decisions. Anfield is at its best with a bit of spice and backs against walls, and the power of that was more evident yesterday than it has been in a long time.

JACK: I would love us to stick with the 4-4-2 and I think we have to, but it’s getting trickier and trickier with these injuries.

We lost Luis Diaz last week and we’ve now lost the next best option for the left wing in Diogo Jota. I’d like to see Fabio Carvalho given an opportunity in that role now, but it’ll be interesting to see what Klopp has in mind for West Ham.

ADAM: The formation conversation is a really interesting one. I thought Elliott’s inclusion gave us the opportunity to be a bit fluid with it but we were very front foot, in a lot of ways we had nothing to lose and that seemed to be Klopp’s mentality too.

Whether it’s a long-term solution remains to be seen, it felt originally like the manager was just giving something a try in response to the team’s struggles, but now that he’s got a tune out of the players with this system there’s every chance that we continue to see this for the foreseeable.

BEN: I’m taking the approach of viewing the last three games completely objectively to the games beforehand. We lost a very close, contentious game to in-form leaders Arsenal, scored seven against Rangers and just handed City their first loss of the season.

The 4-4-2 formation seems to have removed the defensive vulnerability and plug the midfield gaps, whilst retaining our attacking prowess and I think keeping this formation would also benefit Nunez’s integration. Liverpool are less predictable and more decisive using this formation, which could be a significant factor in changing our fortunes this season.