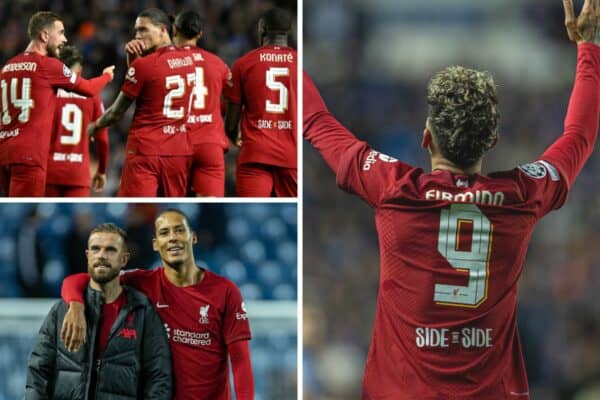 There was plenty of love for Roberto Firmino after Liverpool beat Rangers 7-1, but supporters are already looking to Sunday’s clash with Man City.

The Reds took their Champions League opponents apart at Ibrox on Wednesday evening, in what was a perfect result.

Despite falling behind yet again, Liverpool regrouped impressively, equalising before half-time and scoring six times after the break.

It was a night that suggested Jurgen Klopp‘s side could be on the mend, although the performance still wasn’t perfect.

Here, This Is Anfield’s Henry Jackson (@HenryJackson87) is joined by Red (@TaintlessRed) and John O’Sullivan (@NotoriousJOS) to discuss a great win, a revitalised Firmino and much more.

How good was Bobby?

RED: Firmino’s form in front of goal has been so important to Liverpool this season, while others haven’t always been prolific.

Bobby often suffers from hesitancy when he gets a chance, but he’s finishing with a lot of confidence at the moment.

He’s not quite the Firmino of three seasons ago, as he can still take a bit too long to make passes and his pressing isn’t as efficient, but when he’s scoring as well as he is, we’ve got to be happy.

JOHN: Bobby is the most anomalous player in the world.

He has looked a shadow of himself for three years, but has come up trumps this season and has been, on the whole, the Reds’ best player.

His movement and finishing have been superb and we saw both at Ibrox. Those were goals of an archetypal No. 9 and his assist for Nunez brought back memories of 2017/18.

Bobby has gone from the woodpile to essential in what feels like the blink of an eye.

HENRY: I’ve made it clear over the years that Bobby is my favourite player of the Klopp era – this is precisely why!

He’s past his best, don’t get me wrong, but this was a vintage showing from him, with the assist the icing on the cake.

This time three or four months ago, Bobby would have been fifth-choice attacker, but now it would be madness not to start him against City.

I love him so much and his eventual exit could break me!

RED: The scoreline is clearly the biggest positive. A big win at Ibrox and also Napoli’s victory over Ajax means a single point from our last two games will secure qualification.

Salah showing how good he is if he’s in dangerous areas and not spending all his energy covering for the big holes left on the right-hand side is also a massive plus.

Meanwhile, Nunez continues to improve with very good movement – that wasn’t utilised enough in first half – and he got another goal.

Another positive, despite being partially at fault for the opening goal, was Konate, who looked dominant and confident.

Conceding the first goal has become a frustrating and embarrassing new custom, though. We can’t always be expected to be coming back to win games.

City will take bigger advantage of how open we are in central areas – that’s been a problem, whether we’ve played 4-3-3 or 4-4-2, and is still an issue.

JOHN: A Salah hat-trick off the bench is a major positive.

We all know he’s brilliant, so if this match is him kickstarting his season, the win is worth so much more than three group points.

I thought Elliott was the standout from those who started, alongside Bobby. His touch, ability to come off the line and get involved and vision were all exquisite.

Darwin scoring is great, too. That’s what he needs to be judged on.

Criticising his linkup play is missing the point – he’s there to provide thrust and goals, and this will give his confidence a shot in the arm.

Konate can be happy with his showing, too. Matip is great and a better technical player, but I think Ibou will likely get better and better, and is the ideal partner for Virgil.

In terms of negatives, the first half was Liverpool of 2022/23 in a nutshell. Conceding first, again, and looking really disjointed and physically second-best.

Whether they did too much or too little in pre-season, or if this drop-off in energy is inevitable after injuries or their draining campaign last time out, they can appear totally devoid of physicality at times.

HENRY: I think the lads have covered the plusses and minuses perfectly here.

It was an excellent night, given the result, and the goals for Salah definitely have the potential to turn his season around.

I also totally agree that Ibou stood out at the back, while Elliott grew in confidence and produced some lovely moments in the second half.

That being said, the first half was largely poor, with Fabinho and Henderson’s lack of legs and inability to track runners remaining an issue.

It would be wrong to simply focus on the result and assume everything is great again – it’s not, and if we don’t improve off the ball this weekend, it could get ugly.

Are you confident against Man City?

RED: We already know that Liverpool winning by a big margin doesn’t guarantee how they will perform next match (Bournemouth, anyone?), especially since the quality of opposition couldn’t be any different next.

This season, it’s hard to know which Liverpool will turn up to face Man City, so I cannot be confident, but I’ll hold on to a bit of hope.

In a strange way, because Liverpool are so far behind in the Premier League that we’re not challenging for the title, that takes a bit of pressure off.

I just hope the players who are picked play with intensity and desire.

I would like to see Konate start – his pace and power can help vs. Haaland – and I also want to see Fabinho in. His composure in his passing through central areas helps, as do those telescopic legs.

Whichever system we deploy or players we select, it will be nice if we don’t concede the first goal for a change!

JOHN: It’s hard to be confident, what with Liverpool being so inconsistent this season, but I don’t think the gap is truly reflective of the divide between the teams.

Walker being missing is a blow for City, as he’s their best option to stop counter-attacks, and the Reds should be confident in the final third after Rangers.

I agree that Konate is likely a better player to deal with Haaland than Matip, if anyone can, so his return is timely.

I won’t predict a win, but I have faith that Liverpool will play a lot better than in their other big games.

HENRY: I would be staggered if Liverpool win, to be honest. Sorry.

City look sensational at the moment and they will both boss possession and have more legs, which is clearly a huge advantage for them.

I can already see De Bruyne waltzing through our midfield at will, which is a painful image.

Anfield can produce memorable atmospheres, however, and much like Man United when they beat us earlier in the season, a surprise home win certainly isn’t out of the question.

There is more chance of it being a repeat of the 4-1 defeat in the Covid season than the 3-0 Champions League win in 2018, but who knows!