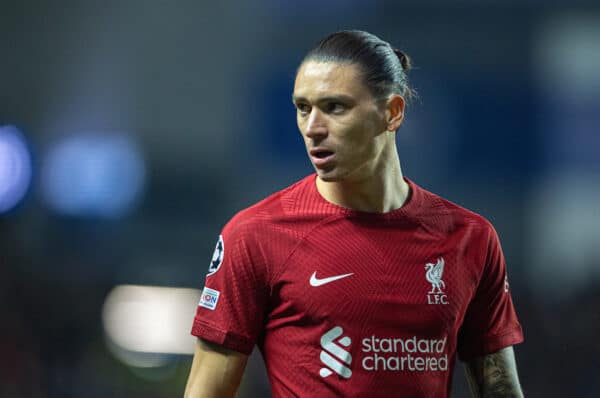 Darwin Nunez makes a welcome return to the Liverpool lineup as the Reds face Ajax in the Champions League tonight.

Nunez is one of three changes to the side that inexplicably lost to Nottingham Forest on Saturday, coming into the side in place of Fabio Carvalho.

The other changes see Alexander-Arnold replace James Milner at right-back and Jordan Henderson in for Curtis Jones in midfield.

With Nunez, Mo Salah and Roberto Firmino all in the lineup, it’s unclear whether it is 433 or 442 with one of that trio out wide.

Ibrahima Konate makes a welcome return to the squad after injury, among the subs and set to get minutes from the bench.

Liverpool can qualify for the knockout stages with a draw, or better, tonight.

Nunez was on target last time out in Europe, the record 7-1 win at Rangers two weeks ago, and has scored on each of his last three starts.

He returns to the lineup after missing Saturday’s match due to muscle soreness.

Liverpool are without Thiago, Luis Diaz, Diogo Jota, Arthur, Joel Matip, Naby Keita and Alex Oxlade-Chamberlain – the latter two due to not being registered in the Champions League.

It means that youngster Stefan Bajcetic and new signing Calvin Ramsay are among the Reds’ subs.

Kick-off at the Johan Cruyff ArenA is 8pm (BST).