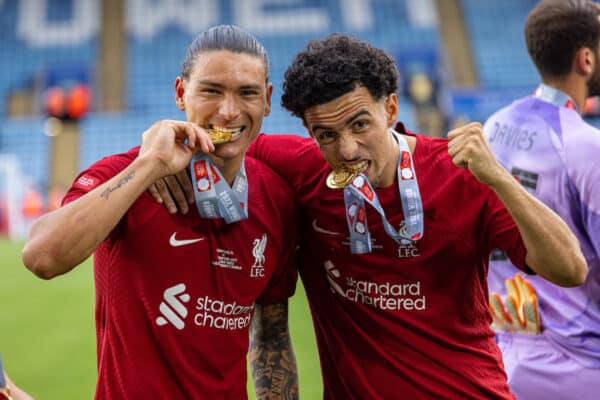 Curtis Jones feels there is no value is “sulking” over his situation at Liverpool, with the midfielder believing a “bigger role” is to come when fully fit.

Jones has not enjoyed a regular run of appearances for his club since the start of 2022, which included a stretch of five consecutive starts that he has not replicated since.

Various injury issues, which both he and Jurgen Klopp have described as “freak,” have limited the 21-year-old’s minutes – but he is now, finally, back in the fold.

He has featured in each of the last three games, including 90 minutes in the 1-0 loss to Nottingham Forest, providing another valuable option in both midfield and out wide.

There is a chance he starts again when Leeds visit Anfield on Saturday night, and ahead of that game, he described himself as “definitely almost there” in terms of his fitness.

“Fitness-wise, I wouldn’t say I am 100 percent yet but I’m definitely almost there.

“I was out for 10 weeks, I’ve done all my recovery stuff and fitness stuff but it’s never the same as a game so I’m just taking it each game at a time and then hopefully I’ll be back to 100 percent soon.”

It would be a big boost for Liverpool to have their No. 17 back fit and in form again, with it easy to forget how much ability and potential Jones has.

And the time spent on the sidelines appears to have dealt the youngster a dose of realism when it comes to his role within Klopp’s squad, showing maturity when discussing his current situation.

“It’s not a thing I sulk about anymore,” he said when asked about the prospect of building up minutes in the weeks to come.

“I know that I play a role in the team and when I’m back to my best I know that it will be a bigger role.

“But at the same time you have to give credit to the lads who are in the team now, who are doing well.

“I have to just wait and when the chance comes, I’ve got to take the chance and keep my shirt.”