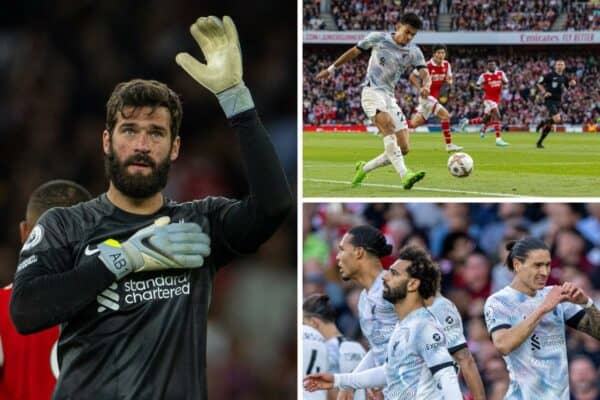 After another show of defensive fragility and a lack of composure in the game-defining moments, Liverpool were left tasting defeat at the hands of Arsenal, with injuries adding to the woes.

An Arsenal side full of confidence will have been rubbing their hands in anticipation of a Liverpool team who are a shadow of their former selves, one always bound to offer opportunities.

The first came inside 57 seconds and the Gunners seized their moment, Liverpool then twice pegged back Mikel Arteta’s side only for a late penalty to inflict a 3-2 defeat.

Injuries to Luis Diaz and Trent Alexander-Arnold only added to the misery as the inquest into what is going wrong continues.

Here, This Is Anfield’s Joanna Durkan (@JoannaDurkan_) is joined by Adam Beattie (@beatts94) and Ben Kelly (@bkelly776) to discuss Darwin Nunez, the injuries and the difficult conversations ahead.

Nunez’s performance was a welcome positive…

ADAM: Seeing him get on the scoresheet was really pleasing. I thought he looked really lively against Rangers and we’re seeing signs of him settling into this team and system.

His clever diagonal runs have been a real headache for defenders and although it’s a bit cliche I’m hopeful that is the goal that sets him off on a bit of a run.

I’ve found it fascinating to hear so many writing him off despite not really having had a run of starts yet, to me he looks like a player with all the tools, and our recruitment team rarely miss when it comes to big-money signings.

BEN: From a personal perspective, this was a solid performance from Darwin that, as you’ve said Adam, built on what we saw on Tuesday.

The general consensus after Rangers was that he was making the right runs and getting into the right positions, and therefore the goals would start to come eventually.

He seems to have a mentality where he’s desperate to succeed, desperate to prove people wrong. You could see that by his celebration too.

The problem is we’re just nowhere near the stage where you can begin to rely on him for big moments and to score important goals for us, which is kind of what we need from someone, anyone, at the moment.

JOANNA: I agree with you there, Ben. We’re on the right path with Nunez but, using his analogy, I don’t feel the ketchup bottle is quite ready to flow for him just now.

You could see what the goal meant to him, a very tidy finish, and that he gets into the right places and asks questions of the defence is half the battle, one he’s very adept at winning.

I do wish he’d learn to stay onside more often than not, though. In games like that, it only serves to fuel frustration and stops any chance of sustaining pressure or finding rhythm.

Going back to what Adam said earlier, it’s odd to see so many write him off so easily and early into the season – it’s hardly been the ideal environment to thrive, has it?

Those injuries rub salt into the wound…

ADAM: When it rains, it pours! It was hard to tell how bad the damage was to both but Klopp’s comments after the game really weren’t a good sign.

Diaz, in particular, has been one of the standouts for me this season so it’s a real shame that he’s been stopped in his tracks, all we can do is keep our fingers crossed for a speedy recovery from both.

Klopp’s words really didn’t sound positive and losing Diaz for a sustained period of time is something I don’t want to consider but feel like I’m certainly going to have to!

He’s featured in every game this season and has missed only just over 100 minutes of action for Liverpool, he gives us an entirely different dimension. I think I’ll be in denial with this one.

For Trent, you hope that the prognosis is better having played on and then seen his ankle swell during the break, but in some way you feel taking him out of the spotlight wouldn’t be a bad thing.

It’s not ideal, don’t get me wrong, but he’s one that needs to hit the reset button.

BEN: It felt like the Diaz injury really took the wind out of our sails. He was such a pest in the first half and gave Arsenal’s right side all kinds of trouble, and I don’t think it’s a coincidence that the second half we weren’t as intense after he had gone off.

I thought overall, we would’ve been good value for 1-1 had it gone in like that at halftime, but in the second half all the positive stuff we were doing from the first half evaporated and I think it was down to Diaz’s departure. It’s a huge issue if he’s not fit for City next weekend, which isn’t looking if we’re going off of Klopp’s words.

Trent needed to come off, injury or not. His confidence will be absolutely shot. He probably needs the World Cup period to take some time off at this point rather than going, although I doubt he’ll see it that way.

Gary Neville did a great piece of MNF last week basically explaining how if he can somewhat master even the basics of defending, the sky is still the limit for him. But right now, we look a little way off that.

The decision-making for the second goal is so poor. If you’re going to go over in that situation, you’ve got to take everything, ball and man. He went over and contributed nothing, and it cost us at the back post. Dreadful.

ADAM: Just a note on the atmosphere, aside from the two goals our end was fairly flat again.

After what was the longest season of our lives it feels like the start of this campaign has taken the wind out of our sails a bit, and it’s certainly come as a bit of a shock to the system.

It feels like we’ve said this every week since August but all we can hope for is that a big result is around the corner to kick us into gear and lift the mood around the place.

But it’s definitely the most buoyant I’ve ever seen the Emirates, the mood is really positive there at the minute and with good reason.

I still think Man City will win the league but it feels like Arteta is building something there which reminds me slightly of Klopp in 2017 and the supporters are very much on board with it.

How worrying is the defending becoming?

BEN: It’s absolutely incredible that this is the same set of players from last season that we’re watching. A group of players that have been so formidable for so long.

Look, it won’t last forever, I still think the ‘blip’ will plateau, but right now it’s unrecognisable. The sequence of play leading up to the penalty given away was unbelievably bad. It was like watching someone play Fifa really badly.

The 4-2-3-1 system isn’t perfect, but it’s not the system that cost us two of the goals. What cost us was no players taking responsibility and making a strong tackle or a big clearance. We need the leaders back. We need the players we know back.

JOANNA: Too right there Ben, it’s not the system. It’s the players making careless errors, being complacent and not knowing what is around them and being disciplined.

Conceding with 57 seconds is completely unacceptable, players can be out of form and it’s a nightmare when it’s all at the same time but that doesn’t excuse making the same mistake over and over again.

That’s 10 league games from the last 12 we’ve conceded first, giving ourselves a hill to climb every time is not conducive to success, far from it. There’s a deeper issue at play.

It’s so easy for the opposition and I dread to think what Man City have in store next week.

World-class players don’t become bad overnight but there needs to be some soul-searching and brave moves in the weeks to come.

ADAM: We had hard lines at times, particularly with a few of the refereeing decisions, but we really didn’t help ourselves either.

The goal just before halftime was a painfully cheap one and a real kick in the teeth given we’d been the better side up to that point.

There are going to be some difficult conversations at Kirby this week and I’m not sure what the answer is in terms of turning this around, but these are elite-level defenders and they are making sloppy mistakes on a weekly basis, the same defenders who have won us everything.

Our reaction to their first two goals was actually really good, but at this level, you can’t afford to switch off as often as we are doing at the minute.