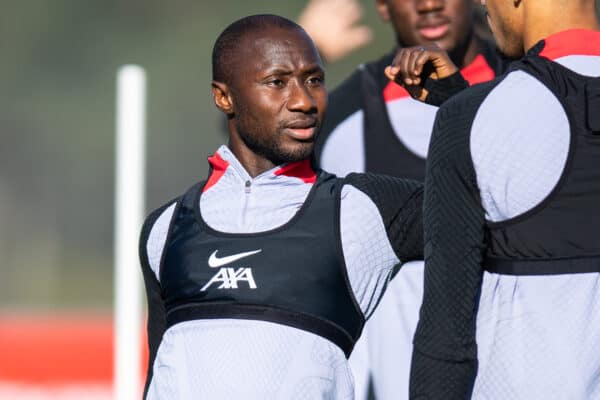 Jurgen Klopp not expecting much from Naby Keita before World Cup

Jurgen Klopp has ruled Naby Keita out of playing a big role in the final five games before the World Cup, with a “pre-season” planned during the break.

Keita has not featured for Liverpool since 3-1 win over Man City in the Community Shield, but has recently returned to full training after a hamstring injury.

The Guinean was left out of the squad for the Champions League group stage, and is not expected to play – at least in a significant way – before the World Cup.

Speaking on the situation ahead of the clash with Leeds on Saturday night, Klopp was eager not to put pressure on his No. 8 after a long spell out.

“Naby’s still in a longer rehab phase. It will be tight,” he said when asked if Keita could be back before the tournament, which kicks off on November 20.

“I think that Naby will have a full ‘pre-season’ with us in December, and that will be perfect for him.

“Even if he can play before, he has no chance to be fully fit. He comes then out of rehab and there are five games.

“I wouldn’t rule him out now for one or two of them, but in this moment there is still a gap to fill.”

Liverpool are set to head to Dubai for a mid-season training camp during the World Cup, with Klopp confirming that there are around three-and-a-half weeks planned for another warmup schedule.

They are due to take on AC Milan and Lyon during their time away, which would give Keita an opportunity to build up minutes ahead of the restart at Aston Villa on Boxing Day.

However, it is difficult to shake the suspicion that the 27-year-old could still be moved on in the January transfer window, and that only the timing of his injury stopped a potential exit in the summer.

Keita’s setback came amid intense speculation over his future, with his representatives making a clear play in the German media to generate interest.

With just six months left on his contract upon the turn of the year – and having averaged only 29 games a season since his £52.8 million move from RB Leipzig in 2018 – it could be the final opportunity for Liverpool to recoup any of their outlay.