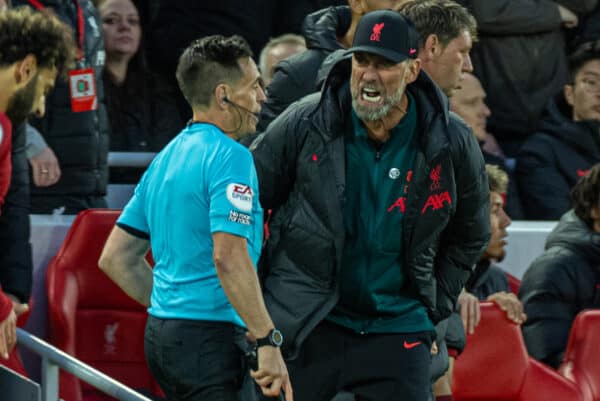 Jurgen Klopp has accepted his red card during Liverpool’s 1-0 win over Man City, but was left staggered by the awful refereeing decisions at Anfield.

Liverpool vs. Man City is undoubtedly the most high-profile fixture in English football – and, arguably, world football at present.

Unfortunately, the standard of refereeing in the Premier League is frequently not up to those set by the players on the pitch, as was certainly the case on Sunday.

Referee Anthony Taylor tried to let the game flow whenever possible, but there were clear oversights in his officiating – including, initially, the buildup to Phil Foden’s disallowed goal.

A VAR check led to that effort being chalked off, but after Mohamed Salah‘s eventual winner, a baffling situation played out that led to a red card for Klopp.

Salah was hauled down by Bernardo Silva directly in front of linesman Gary Beswick, with neither he nor Taylor of the belief that it was a foul – the manager then sent off, deservedly, for his reaction.

Speaking in his post-match press conference, Klopp admitted his fault in protesting furiously, but took the opportunity to question the decisions.

“Of course, red card, my fault. I went over the top in the moment,” he said.

“I don’t think I was disrespectful to anybody, but when you look at the pictures back, I know myself, at 55 years, the way I look in these moments is already worth a red card – who cares what I say.

“I lost it in that moment, it’s not OK. But I think, a little bit as an excuse, I would like to mention: how can you not whistle that foul?

“How on earth is it possible? I wish I could get an explanation.

“I’m not sure what Pep said here, but probably not a lot, he was probably very disappointed or frustrated or whatever.

“But during the game, he agreed completely that Anthony Taylor just let the things run. Why would you do that? Both teams, it was not one [or the other].

“I’ve heard now that people said it was Anfield that made the VAR decision. For the foul on Mo, Anfield no chance to have any impact.

“[For the disallowed goal], it’s a foul on Fabinho, I think we agree on that. Then Ali has his hand on the ball.

“If Anfield decided now that VAR intervened – I’m not sure – imagine if it wouldn’t.

“Then we would sit here and speak about three situations where he should have whistled. Then you think ‘oh, that’s now really unlucky’.

“So, there was already the first moment where Pep and I were pretty animated, but actually for the same reason, to be 100 percent honest. Not arguing with each other, not at all.

“Then, yeah, it’s the situation, I saw, I just had the perfect view of the linesman, and you can imagine, we’re 1-0 up and if you get a free-kick there or you have counter-attack there, that’s pretty much a 100 percent difference.

“That was the moment where I snapped. Again, I’m not proud of that, but it happened.”