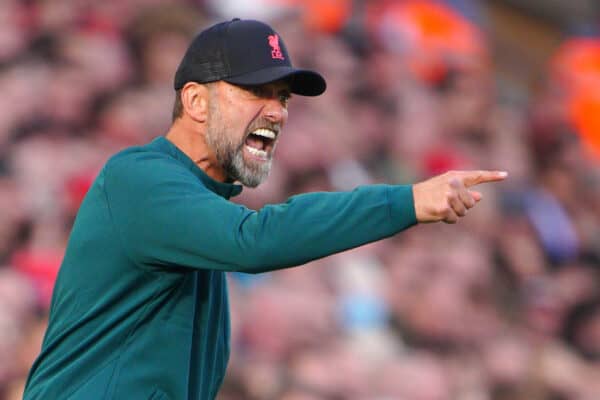 Jurgen Klopp: “We are still Liverpool, we are a dominant football team”

Jurgen Klopp knows the opposition are eager to exploit Liverpool’s soft underbelly in defence but that isn’t to force a change in approach, only the desire to “close that door.”

The manager does not enjoy questions pertaining to Liverpool’s slow start to games, which has seen his side concede first in eight of their 12 games since the opening day at Fulham.

From those games, Liverpool have gone on to win only twice, with holes they dig for themselves not easy to climb out of in their current form.

It’s an open invitation for every team who opposes Liverpool to try their luck, and with many succeeding, it has forced a change in mentality to the one the Reds forced at their relentless best.

Klopp knows that his side have “looked vulnerable” but being a “dominant football team” remains at Liverpool’s heart, and that isn’t going to change.

“That’s normal because we have looked vulnerable in moments,” Klopp told Sky Sports when asked about the change in mentality from the opposition. “That’s how it is.

“If you win the last 10 games then the opponent is not coming thinking they know how we can do it.

“It’s a normal situation but it’s up to us to change that, to close the gaps.

“This first goal was we lost the ball in a moment where you cannot be compact, it’s not possible because we have the ball – it’s a build-up situation.

“You cannot prepare everything. If you are in a build-up situation everything opens up on the pitch, that is why you should keep the ball there because that is where you are most vulnerable.

“We cannot change that [our style of play]. We are still Liverpool, we are a dominant football team.

“For sure, teams think there are more chances against us, but it’s for us to close that door again.”