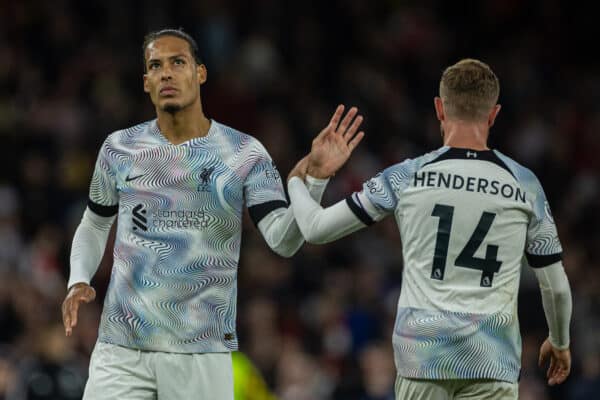 For a myriad of reasons Liverpool haven’t won a Premier League fixture since August and have now conceded first in 10 of the last 12 top-flight games. The funk is contagious.

Beyond midweek Champions League duties in Glasgow, next up domestically will be the visit of Man City.

Law of averages like; we’ll smash Pep Guardiola’s side on Sunday.

In terms of more pragmatic realism, Jurgen Klopp won’t be able to put his faith in the laws of average for our next Premier League assignment. It will take infinitely more than that to mug the reigning champions.

Should we approach the visit of City with the wide-open sentiment with which we travelled to north London, then Erling Haaland will enjoy a turkey shoot of an afternoon. When you’re punch-drunk the last thing you need to be doing is going out there next Sunday throwing around haymakers that leave you little in the way of a viable defence.

Whoever we were going to be dealt with next, the task for Liverpool was always going to be one of nailing the basics before trying to dance. We have now reached mastering putting one foot in front of the other territory.

This doesn’t mean that we must curl up into the foetal position when City come hunting, but we can’t be handing out the type of gifts that we have across the last 180 minutes plus added time of Premier League football, a span when we have alarmingly shipped six goals.

In positions like the one we currently find ourselves in, the natural reaction is to look for scapegoats or weak links. Some of us will turn on the owners and frustration is difficult to tame. Everyone has their own right to their preferred reaction, but what we are looking at on the field is the need for collective responsibility.

This isn’t suddenly a squad of poor footballers. Bobby Firmino’s input, the sporadic outbursts of fine goalkeeping from Alisson, the effervescence of Harvey Elliott, plus the skilful, singlemindedness of Luis Diaz aside, and this funk we are experiencing has been contagious.

Wonderful players of world class talent have been unable to summon up the levels of performance we know them capable of.

For some, there are flashes of their true selves here and there, but they have been fleeting and flickering mirages. Now we see them, now we don’t. We cannot sustain prolonged ebullience and are lacking in positivity.

This is a team that has prided itself on prospering together and now it suffers together. These are players that have too much class for them not to eventually emerge from the trees they find themselves consumed by, but the longer it goes on the more the wounds will fester, and as a result, our recovery and rehabilitation will not come easily or speedily.

We could well beat City on Sunday, but I wouldn’t be surprised if it were then followed by points being dropped against West Ham and/or Nottingham Forest.

In a way, it is reassuring that Klopp has pulled us out of periodical funks before. He will know that you can’t go from 0-to-100mph in one handy 90-minute session, it’s all about shifting steps and improving collective footwork.

Currently, we are perpetually taking one step forward, one to the side, and one back, with our only forward motion coming in the Champions League.

Firstly, we will begin to add in that extra step forward, combining it with continued sideways and backwards steps, before we can begin to consider launching ourselves into a comfortable stride.

We aren’t alone in throwing out the most dysfunctional of shapes either. There feels like there is something in the water or the wind.

We all lament the loss of Sadio Mane – whose hypothetical presence at Anfield this season wouldn’t have solved our complex ills – yet the Bayern Munich he has signed for are labouring through their Bundesliga gears, currently finding themselves sat behind Union Berlin and Freiburg.

While both Internazionale and Juventus are being left in the Serie A dust of Napoli, Atalanta, the defending champions AC Milan, even Udinese and the two habitual Roman underachievers. Meanwhile, in Spain, Sevilla are languishing in the relegation zone. Strange days indeed.

Wednesday night at Ibrox will kick start a month of madness, where we will cram in ten games across three different competitions having already lowered our targets in one of them.

We will continue to absorb punches and procure bruises, but of the six Premier League games we will face during this spell, four of them will be at home and these will offer us chances of finding those tentative steps forward.

Within this, lies a degree of damage limitation and pragmatism.

If we enter the World Cup-flavoured winter shutdown with a perceptibly higher percentage of Premier League wins than the 25 percent that we currently rest at, and armed with a place in the knockout stages of the Champions League, then by the time we all reconvene on Boxing Day we will have something tangible to reach for going into the New Year.