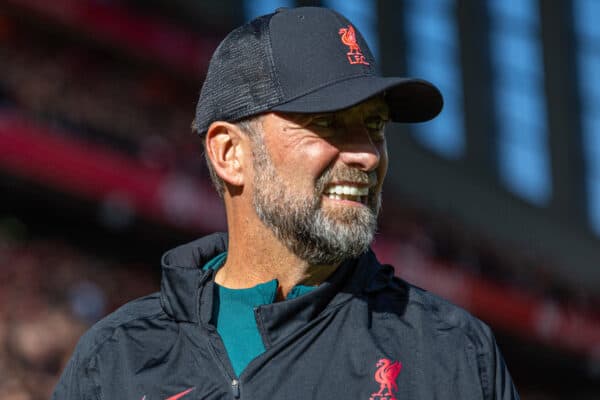 The visit of Rangers saw Jurgen Klopp turn to a different formation, a decision that the manager says was born out of the need to become “unpredictable.”

The Reds’ teamsheet on Tuesday quickly saw the anticipation for the match ramp up as Klopp named four forwards in his XI, a deviation from the readily used 4-3-3 system.

The exact formation was debated before Klopp called it a 4-4-2, although Trent Alexander-Arnold added that it was also “kind of a 4-2-3-1.”

Even though the level of opposition must be taken into account, it was a change that was savoured as the Reds created chances and recorded only their third clean sheet of the season.

The topic was of particular interest to the media ahead of the trip to Arsenal and when asked if the change is the plan for the future, Klopp was quick to insist it is more about Liverpool being “unpredictable again.”

“The thing is, it is much more important for us that we become unpredictable again and we need different systems for that, and so it’s not the only system we can play,” Klopp said.

“We have to be more unpredictable, definitely.”

As for whether teams have worked out how to play against Liverpool, Klopp feels teams have long had the key but the Reds’ execution and intensity made it nearly impossible to find the lock.

It’s all about making the opposition have multiple things to think about when breaking the Reds down, with any formation only as good as those in place to execute it correctly.

“Yes, teams ‘worked out’ how you can play against us when we’re not at our best,” he admitted.

“Teams have worked out how to play against us for years but it still didn’t work out for them because we were exceptional in the moment in the things we did.

“The moment you are not exceptional it looks like, ‘ahh now they realise’.

“In our best games, I could show you the parts where we could’ve had problems, but we didn’t because we put so much pressure on the opposition they couldn’t find these spaces.

“That’s the risk you take. In the moment you don’t play on your top [level] these gaps are still there and they can play the pass through, and now it looks like ‘now they know how to play against them’.

“No, it was always clear. There is no system in the world which has no weakness – five, three, four or no one at the back. It’s all about how we perform, the intensity.

“Defending in a 4-3-3 or a 5-4-1, if you look at it you know where the gaps are but you fill them with your movements and then the gaps don’t exist or are only there for a wink.

“There’s no system we can rely on say, ‘from now on this is perfect’, because we know how to play against other teams.

“You see how they ‘usually’ play and that’s the problem for us is that most teams change system [against us], Arsenal will not do that they believe in what they are doing, rightly so.

“We know how to prepare for Arsenal but, in the end, it’s how we execute it.

“If you prepare for us I just like it that they have to think twice or three times where there might be something they could use.”