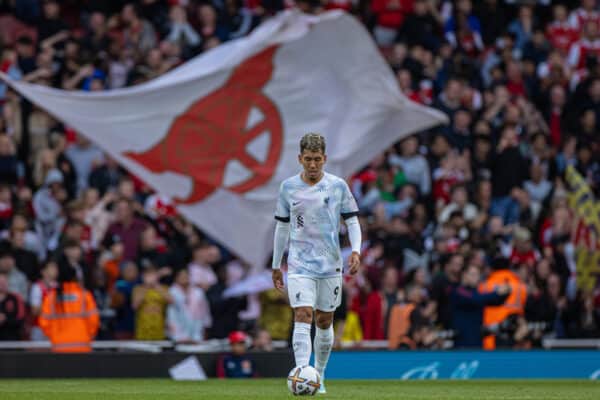 Liverpool lost 3-2 away to Arsenal on Sunday afternoon, with supporters left feeling flat after another bad day at the office.

The Reds faced a big challenge at the Emirates, as they came up against a team full of confidence and quality, one sitting at the top of the table.

Darwin Nunez and Roberto Firmino found the net for Jurgen Klopp‘s side, but they were poor at the back, conceding three times.

Liverpool fans took to Twitter to react to the defeat, with many concerned that the Reds simply aren’t the team they used to be.

Arsenal just much better. Say what you will about Oliver, this team is just bad.

As it stands we’re a long way off top 4 and it’s October. Not sure I can see us finding any form with this many players low on confidence or past their best especially with a manager seemingly unable to address key issues.

Hurts to see this, but we’ve only ourselves to blame.

Just don’t get it anymore.

No one in form, not even the manager or his coaching staff.

Darwin and Diaz were our outlets, as soon as Diaz went off we lost that.

A lot to unpick there. One thing's for certain the league title is none of our business.

I think this LFC group has reached the end of its cycle, as a whole. Granted, by design, for lack of succession planning in recruitment, bizarre tactical changes, & a severe drop-off in commitment. Strange given last season but we are where we are.

Pathetic. The only positive so far this season is that Liverpool have banked United, Everton — two of which are always hard for the Reds, regardless — and Arsenal, which is increasingly hard, away.

They have been horrendous, but hopefully the break plus a kinder run helps

Liverpool as close to 18th placed Wolves as they are 5th placed Newcastle.

Decisions etc yeh yeh but the younger,faster,more energetic and a visibly more motivated team won today. We are in massive top 4 battle for this season. We are a Difficult watch right now. Serious issues throughout the spine which has been our strength in last 5 years. #LFC

My overriding concern with all this is that Klopp doesn't seem able to be able to correct the issues that keep occurring week after week. Consistently dreadful starts, disorganised defending, porous midfield, disjointed attack, lethargic movement off the ball. What's the fix?

The problem is we don’t even spend to fix this team. There needs to be a major change in our strategy going forward if we want a new team for Klopp to take forward

This was another game that suggested that Liverpool are now in a genuine crisis, with only two wins coming their way in the league this season.

The Reds are a shadow of the team who looked the best in the world just earlier this year, with so much intensity and focus lacking.

They look a jaded, ageing group of players and Klopp has an enormous job on his hands, in terms of getting his side out of this worrying rut.