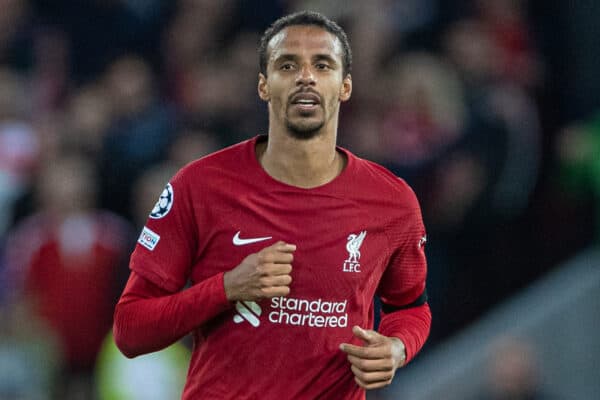 Liverpool suffer yet another injury blow with Joel Matip ruled out

Having appeared to have come out of the other end of an injury crisis, the problems are mounting up again for Liverpool, with Joel Matip now ruled out.

Just as their fitness problems were clearing up, the Reds have been dealt with a triple blow following their 3-2 loss at Arsenal.

Luis Diaz is set to be missing until after the World Cup due to a knee issue, while Trent Alexander-Arnold is sidelined for at least a fortnight with an ankle injury.

Those injuries were already clear following Jurgen Klopp‘s post-match press conference at the Emirates, but another setback has now emerged.

According to The Athletic‘s James Pearce, Matip is now set to miss “two to three weeks” with a calf injury picked up in the second half on Sunday.

Matip was substituted in the 69th minute against Arsenal, with Ibrahima Konate taking his place, and he is now likely to be absent for as many as six games between now and the end of October.

It is a major concern for Klopp, who is now without two of his four first-choice starters at the back, while Andy Robertson has only just returned from a hamstring injury himself.

Joe Gomez is among the options to fill in at either centre-back or right-back, with Konate and Nat Phillips the other candidates to partner Virgil van Dijk at the heart of the defence.

Calvin Ramsay is not yet fully fit following a back complaint and is expected to build up minutes with the under-21s before being trusted at first-team level, with James Milner a more likely stand-in at right-back at this stage.

Sepp van den Berg and Rhys Williams are on loan at Schalke and Blackpool respectively, and are both recovering from injuries of their own.

Academy centre-back Jarell Quansah has just recovered from a fitness problem, with Oludare Olufunwa, Lee Jonas, Luke Chambers, James Norris and Isaac Mabaya among the other options within the youth setup.

Diaz, Alexander-Arnold and Matip join Naby Keita, Alex Oxlade-Chamberlain and Arthur in the treatment room, with Liverpool set to play 10 times over the next 32 days.