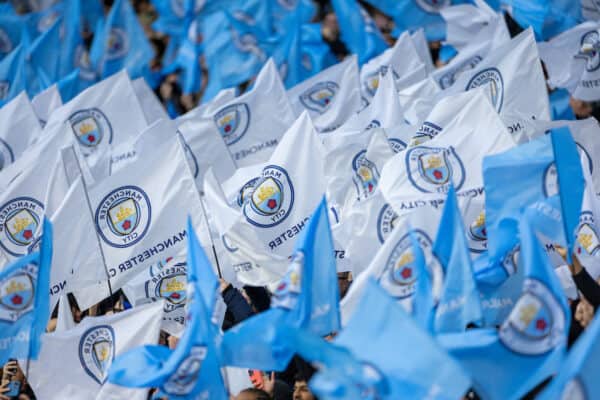 Four days later, and conveniently after intervention from Jurgen Klopp, Man City have finally apologised for their fans’ Hillsborough chants at Anfield.

City are clearly still hurting from their 1-0 defeat to Liverpool on Sunday, but their handling of the fallout from the clash has been far from tasteful.

Throughout the Sky Sports broadcast of the game, and via several videos on social media, there were audible Hillsborough chants directed from a large group of away supporters.

Liverpool condemned those chants immediately after the game, which also saw complaints from City of coins thrown at Pep Guardiola and an attack on their team bus, though it was not until Tuesday that Merseyside Police received any report.

But there had been a deafening silence from City over the actions of their supporters, instead attempting to deflect blame onto Klopp, with claims of “borderline xenophobia” in his comments regarding their finances.

That was until Thursday afternoon, with Hillsborough campaigner Charlotte Hennessy – whose father James was unlawfully killed in the disaster – revealing an email apology from the club.

This afternoon the club responded.
I have attached their reply.
I would like to thank Man City FC for condemning the chants, offering the support to @NowHillsborough
Vowing to educate their fans and standing with us in agreement that there is no place for such hate in football pic.twitter.com/fmUaWc1202

“We are sorry to read that you and your family have been affected by the events which took place on Sunday, particularly given your connection to the tragedy of the Hillsborough disaster,” a spokesperson wrote.

“As a club we strongly condemn the chanting or signing of songs with connotations of footballing tragedies and will continue to sanction those individuals who are found to be responsible for such behaviour.

“Alongside condemning behaviour of this nature, we stand with Liverpool fans in marking the anniversary of Hillsborough each year to remember those who sadly lost their lives.

“At the same time, we also commend the actions of the many organisations who continue to educate the wider public about the tragedy and those who call for positive action to be taken through the Hillsborough Law campaign.

“Ahead of the next meeting between our clubs, we will contact all of our season ticket and matchday members to reiterate that this type of hateful chanting and singing has no place in the game, and ask the vast majority of our fans who would never engage in such behaviour to call out and report any individual that chooses to do so.

City are still, however, yet to publish a public response to the situation, with The Athletic told that this was only intended as a private email.