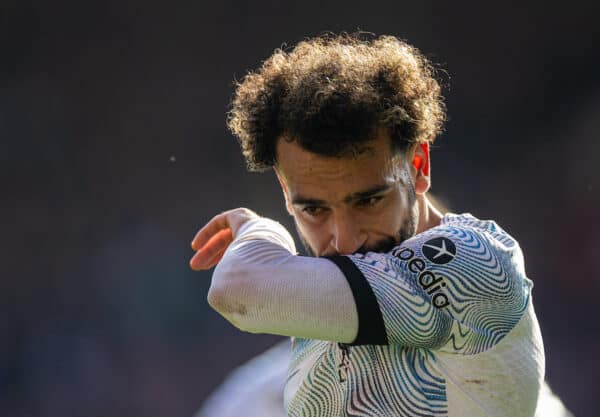 Liverpool failed to build on consecutive victories against Man City and West Ham, instead falling to a disappointing defeat to Nottingham Forest.

Taiwo Awoniyi, a player who signed for the Reds in 2015 but did not play a game for the club before leaving six years later, scored the winning goal for Steve Cooper’s side.

Injuries continue to deplete Liverpool’s squad, but the side fielded at the City Ground should still have had more than enough to see off a side who were bottom of the table going into this fixture.

Virgil van Dijk failed to take three glaring opportunities to score for Jurgen Klopp‘s side, and without Alisson, Forest could easily have extended their lead in the second half.

Overall, it was another incredibly underwhelming Liverpool performance, with supporters voicing their frustrations throughout the game on social media:

Klopp furious with Gomez there for not being more aggressive. Backed off.

I hate it when Virgil does that daft back heel thing. Just defend. https://t.co/3ZI7Bb4hUK

No away wins in the league heading towards November is utterly shambolic, because they could play for 50 hours here and not turn it around.

Quite sick of Liverpool taking until the absolute last minute to finally wake up. So sluggish all game and made it far too easy for Forest for far too long. Deserved absolutely nothing and undoes all the positivity from the last week.

Complete sense of inevitability that this game would finish 1-0 Forest as soon as they scored in the 55th min. Liverpool haven’t looked remotely capable of getting back into it.

Losing to the worst side in the league and looks like Van Dijk and Salah could be added to our ever expanding injury list. What a dreadful season so far

It really is incredible how we invite games like this on ourselves. Bottom of the league have sat deep, shown a bit of physicality and energy and it’s enough to outdo us.

Hard to remember a player’s form drop off as dramatically as Fabinho’s has done over the last couple of months. Normally so quick, classy and composed, he looks sedated.

76% possession & 567 passes, yet there hasn't been one clear-cut opening for Liverpool this afternoon. So disjointed in attack.

Awful performance, although Van Dijk could have had a hat-trick.

Steve Cooper has changed Forest in the last few weeks to be a lot harder to beat, tactically very good again today.

Liverpool were awful, what is going on with Fabinho ? Konate is needed back ASAP!

That was very, very, very bad. 1-0 flattered Liverpool. Could have been a lot worse if not for our goalie. The fact that Alisson is our player of the season says a lot.

Could have nicked something but it would have been wholly undeserved. Slow, sluggish, predictable and too easy to stop minus Thiago. Dare I say it, we also missed Nunez…

Had Liverpool had the likes of Luis Diaz, Diogo Jota and Darwin Nunez fit, there’s every chance this result would have been a very different one, but Klopp will know he simply can’t justify using that excuse.

A team that were two games away from winning every trophy available to them last season should have all of the quality required to see off a poor Forest team.

Still no away win in the Premier League this season.