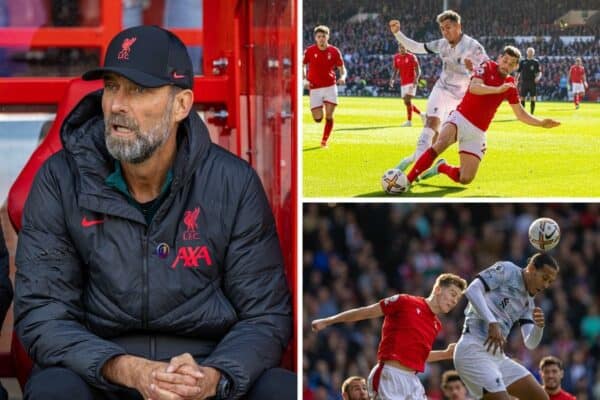 The bad, the abysmal & concerned about Klopp? – Last word on Forest 1-0 Liverpool

Liverpool did not make it difficult for fans to drill down on the negatives after a lifeless defeat to Nottingham Forest.

It was a dire afternoon for anyone of a Liverpool persuasion, in what was hoped to be a comfortable victory and the fourth in a row.

Instead, Jurgen Klopp‘s side were outbattled by weaker opponents yet again and deserved got absolutely nothing from the game.

Here, This Is Anfield’s Henry Jackson (@HenryJackson87) is joined by Dave Hendrick (@EPLIndex) and Liam Togher (@liamtogher88) to discuss an awful defeat and assess an out-of-sorts Klopp.

LIAM: I’ll begin with two outlying positives – Alisson was imperious yet again, while Harvey Elliott continues to look like a 27-year-old in a 19-year-old kid’s body.

Pretty much everyone else who featured for the visitors falls into this category.

DAVE: Where to even start? So much of it was bad wasn’t it? The defence was bad, the midfield was bad, the attack was bad.

As Liam said, Alisson is the only one who played well, as has been the case on a number of occasions this season. We’d genuinely be in the bottom five in the league if it wasn’t for him.

There’s something badly wrong with the mentality of this team right now, they just don’t seem to have any belief in themselves. More on that in a bit I suppose.

I thought our defensive work, as a unit, was back to the garbage we were seeing before the switch to 4-4-2 when teams were just strolling through our midfield.

Forest had runners off the back of us all game long and Milner, Gomez, Virgil and Robertson didn’t seem particularly well able to cope with it.

I don’t know if I’m allowed to swear on This Is Anfield, but sometimes swearing is necessary and this is one of those times. The midfield was a complete f*cking shitshow!

Instead, Jurgen sends out an out-of-form Fabinho and three kids. In footballing terms, Jones is a kid. He might be 21, but he’s so inexperienced in the Premier League despite having been around the first team for so long.

Between himself, Elliott and Carvalho they began the day with roughly 3,700 career minutes in the Premier League between them.

None of them, Fabinho included, seemed to have the first clue of what they were meant to be doing off the ball, and only Elliott seemed to have a rough idea of what to do once he had the ball.

HENRY: I think Liam and Dave have nailed it here – I’m just tearing my hair out with this team at this point.

After such a promising mini-resurgence, this was back to the type of performance I feel like I’ve already seen about 50 times this season!

There was no intensity, fight or quality, and as soon as Forest scored, you knew it was game over. That is damning.

As the lads have both said, at least Alisson came away with his head held high – he really is an extraordinary goalkeeper.

LIAM: Sadly, we got the Napoli Joe Gomez rather than the Man City version – he got badly done for the free-kick which led to Forest’s winning goal.

Van Dijk wasn’t much better and was culpable of a horrendous miss at 0-0.

I barely recall hearing Mo Salah‘s name in commentary, while Fabinho isn’t so much losing midfield duels as not even competing for the ball.

The current versions of these two are imposters from their 2019/20 selves and it’s hurting the team massively.

Still no domestic away win since beating Southampton in mid-May; third league defeat of the season already; deservedly seen off by a team who hadn’t won since that heat wave in the middle of August.

I don’t want to sound overly defeatist given that we’re not yet a third of the way through the campaign, I think you can already count us out of the top-four discussion.

There have simply been too many inexcusable performances and results to suggest that we’ll do enough to oust the likes of Chelsea and Man United.

Once we get knocked out of this season’s Champions League, that will be the last time we play in the competition for some while.

DAVE: The lack of effort from this group is horrific and it wasn’t just in this game. It’s been this way for most of the season.

The players just don’t seem motivated to play, they seem to be lacking focus and are bereft of desire.

As mentioned earlier, something isn’t right in the waters of the club. Has there been some sort of falling out among the squad?

There’s no leadership anywhere to be seen, there’s nobody digging others out when they make mistakes. There’s nobody grabbing hold of players and getting them locked in on the game.

Van Dijk used to take care of holding others accountable but he seems preoccupied. Has the message stopped getting from the coaching staff to the players? Have the players stopped listening?

I’m really not sure what the problem is but the fact that the only games we’ve gotten up for this season were the Community Shield against City and the home game against them is a major problem.

HENRY: It does certainly feel as though something isn’t right within the squad – there is an alarming lack of focus too often and they don’t look as close as they once were.

Some will point to the City game and say that’s nonsense, but it is actually worse that they only seem able to pick themselves up for the big games.

Too many seem to be coasting and there were so many bad individual performances at Forest, with Gomez particularly awful. When he backed away from the ball in the second half I was ready to explode!

The thought of not finishing in the top two at the start of the season felt unthinkable, but I now have genuine concerns about missing out on the top four.

And are you concerned about Klopp?

LIAM: The man’s legendary status is beyond dispute given everything he’s done for the club over the past seven years, but that doesn’t mean that some of his decisions and behaviours are beyond reproach.

Klopp has always had a fire in him, but in recent months he seems to be picking needless battles in public, which isn’t doing his image – or that of the club – any good whatsoever.

It’s natural that a manager will try to defend their team after results like this, but you just hope that he’ll call it straight and tell the fanbase that this result and performance is calamitous.

Forget the players needing a break during the World Cup – I nearly think our manager needs it more.

DAVE: I’d be lying if I said no. I believe he can turn things around, but I don’t know that he can.

He’s never shown that he can because he’s never had to deal with a situation like this. The bad run in 2020/21 was purely down to injuries, and while injuries are playing a part this season they aren’t the biggest issue.

The players look like they’ve got nothing left to give. It’s October, and they look shattered. More worrying is that they looked shattered in August.

As I said before, something isn’t translating into changing. Either the staff have stopped being able to get their messages over or maybe the players have stopped listening.

It’s not all the fault of the players, though, and Klopp himself has not had a good season so far. Tactically, he’s only really got it right once, against City in the league. His team selections and in-game switches have often been head-scratchers.

I worry, and have for years, that being asked to work under such a ridiculously tight budget will lead to Klopp becoming Wenger – a brilliant manager who doesn’t get the backing and goes from winning the biggest prizes to calling top four a trophy and winning domestic cups until the fanbase turn on him.

Klopp needs to become more ruthless at all levels. With his players, with his coaching staff, and with the owners. He needs to start demanding more.

HENRY: I totally agree with both here.

Klopp is the best thing to happen to Liverpool in my lifetime and he will forever be a legendary figure, but he’s really struggling at the moment.

He looks tired and tetchy, and his players aren’t performing for him consistently, which is a huge concern.

We all know what happened at Dortmund at the end and I just desperately hope the same doesn’t happen to him here.

He has been let down by the owners in the summer – either that or he was far too stubborn in wanting too specific a player – and he badly needs fresh blood in the squad to turn things around.

I believe things will come good, with lots working against him at the moment, but I am concerned about where Liverpool go from here.