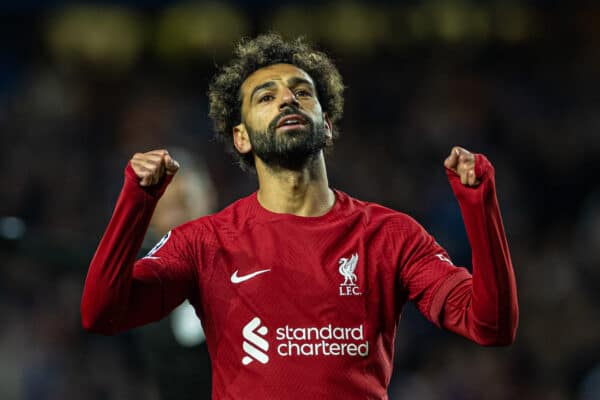 Mohamed Salah broke the record for the fastest Champions League hat-trick in Liverpool’s 7-1 win over Rangers on Wednesday. Here, we delve deeper into the ridiculous numbers behind a special achievement for the Egyptian.

Having started the game on the bench, Salah was eventually introduced with 67 minutes on the clock and the score already 3-1, and within 15 minutes of coming on he had netted three times to score his first Champions League hat-trick.

Six minutes and 12 seconds elapsed in the time it took him to net his first, second and third, a Champions League record.

The previous holder was Bafetimbi Gomis, who struck three times in seven minutes either side of half-time on his way to a four-goal haul in Lyon’s own 7-1 win over Dinamo Zagreb in 2011.

Salah’s three goals have taken his total Champions League tally for the Reds up to 38 goals, making him the highest-scoring Premier League player in the history of the Champions League.

The No.11 has become the sixth Liverpool player to score a Champions League hat-trick, after Philippe Coutinho, Diogo Jota, Yossi Benayoun, Sadio Mane and Michael Owen.

Following Steve Staunton and Steven Gerrard, Salah is only the third substitute in Liverpool history to come off the bench and score three.

His hat-trick came from just nine touches while on the pitch, the fewest in a match for any of the 112 Champions League hat-tricks since 2003/04.

That means a third of Salah’s touches on the ball ended up in the back of the Rangers net.

He is now tied alongside Erling Haaland and Robert Lewandowski at the top of the Champions League goalscoring charts, with all three having scored five goals in this season’s competition so far.

Jota’s role in Salah’s trio of goals should also not be understated, with the Portuguese setting up all three, making him the first Liverpool player to have assisted every goal for a team-mate’s hat-trick since Stan Collymore for Robbie Fowler vs Arsenal in December 1995.

It’s also the first time a player has assisted three goals for a team-mate in the Champions League since March 2012, when Franck Ribery assisted three Mario Gomez strikes for Bayern Munich against Basel.

That’s how to impact the game from the bench!