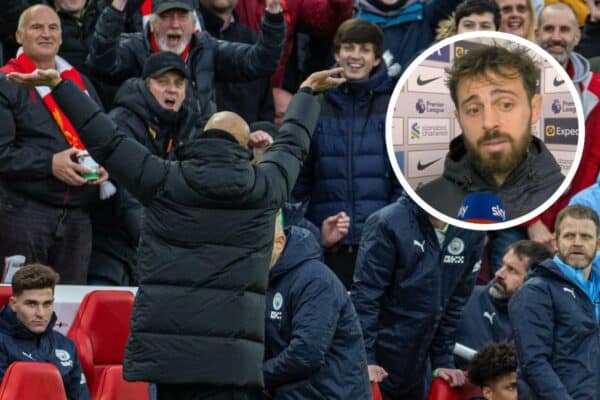 With Man City denied a goal following a clear foul in the buildup as Liverpool won 1-0, Pep Guardiola claimed the power of Anfield influenced the referee.

The two rivals were playing out an intense clash at Anfield when, early in the second half, Phil Foden hammered home via Joe Gomez‘s trailing leg.

Referee Anthony Taylor initially blew for a goal, giving City a 1-0 lead, but he was then called to the pitchside monitor for a VAR check.

Rightly, the goal was overruled due to a foul on Fabinho by Erling Haaland, with there a second infringement later on as Haaland kicked the ball out of Alisson‘s hands.

But in his post-match press conference, Guardiola was far from happy with the decision.

“This is Anfield,” he concluded.

“The referee spoke with my assistant coach and Jurgen, and said ‘OK, I’m not going to make fouls until they’re clear-clear’.

“This is what happened. The referee can decide, ‘I’m going to whistle all the actions’, but he decided not to do it and, after, he did it.

“We didn’t lose the game for that, because nobody knows what would happen.

“But it was a moment that would help our momentum, and we could control and score a goal. We could not do it.”

“What we expect from the referees is consistency in their decisions,” he told Sky Sports.

“When you go through a path of not whistling little contacts throughout the whole game, you need to keep those decisions and keep going that way.

?? "What we expect from referees is consistency" ?

“But if from the beginning of the game you’re not whistling little fouls – and we saw in this game that he was letting us play, which is good, which is fine – then if there is a goal you cannot whistle a soft one.

“If you want consistency from a referee, you cannot change [approach] just because there is a goal and just because it’s a tough decision.

“You have to make the tough decision and keep the goal, in my opinion.”